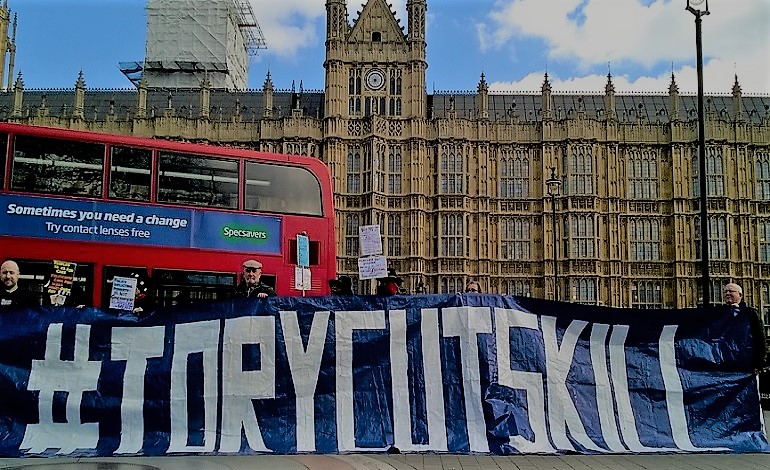 A woman’s experience on a packed London bus serves as a case-in-point for the reality of life for a disabled person in the UK. And the story, in which a bus driver allegedly said “fucking disabled people shouldn’t be allowed on any bus”, is a testament to just how Conservative-led governments have pushed disabled people’s rights backwards.

Paula Peters is a prominent campaigner and member of the Disabled People Against Cuts (DPAC) Steer Group. She is well known for her activism and fighting for disabled people’s rights. But on 16 August, she was subject to what she calls “abuse” and discrimination on the R3 bus to Orpington in Bromley, Greater London. And she took to Facebook to tell the story.

Peters lives with Fibromyalgia Syndrome (FMS), Postural tachycardia syndrome (PoTS), Rheumatoid arthritis (RA), and mental health issues, including anxiety and depression. She has to walk with a tri-rollator, on her doctor’s advice, due to the discomfort, pain, and balance issues caused by her conditions. But on the morning of 16 August, neither the bus driver for private operator Metrobus nor the passengers in question took any of this into account.

The incident arose because, Peters says, the bus driver did not want her to use the disabled passenger space provided. As she wrote in a Facebook post:

There was plenty of room for me, but [I] could see the driver was not happy about me boarding the bus and tutted loudly when I did so. As I went past her to access the space I got [told] ‘fucking disabled people should not be allowed on any bus’. I ignored it, not the first time I have had that to be honest…

She claims the driver turned off the engine, and told her she had to move. But when she explained to the driver that there was no room, they allegedly threatened to throw her off the bus. She wrote:

I told her she was discriminating against me and not taking my access requirements into account and putting my safety at risk. [She then] screamed at [me] which triggers my anxiety and has me on the verge of tears. I get out my notebook to make a note of the date and the time and get the bus driver’s number located at door… then [I] get abuse from the passengers and accused of being rude to the driver… The driver screamed at me and I got sworn at by three passengers.

But sadly, this is not the first time Peters has experienced such abuse and discrimination. As she told The Canary:

It’s a huge problem in London and across the UK. Just on Tuesday, I was denied access to two buses in my local area because of prams in the wheelchair space. You can’t get to priority seating to sit down even though notices are clearly marked. And not a day goes by where I do not have issues on public transport. It’s making me feel really anxious to use the transport network due to abuse, discrimination, and poor access.

Accessibility is still a huge problem on the UK’s transport network. Just 493 stations in the UK (less than 20%) have step-free access. And on London’s tube network, the situation is even worse, with only 13% of stations being accessible from platform to train. But most concerning is perhaps the discrimination Peters witnessed. Because hate crime against disabled people has risen by more than 40% since 2015.

Peters told The Canary that the incident had left her “dreadfully distressed and anxious”:

I have struggled travelling on London buses generally, as was subjected to a hate crime incident three years ago. It left me unable to travel for several weeks as I was too anxious to do so. I don’t feel safe travelling on buses or any public transport for fear of abuse, discrimination, and hate.

And she is clear where she thinks part of the blame for the increase in disabled hate crime lies:

In large part? Due to the government propaganda and rhetoric they spread in the right-wing media about disabled people. The public tend to believe this, which then can result in incidents such as what happened to me on the bus. I told my GP I am scared to leave the house for fear of physical or verbal abuse from the public because I have a disability. Yet I am an activist and need to get to events and meetings…

Come and visit us!

The London iBus system (detailing next stops, amongst other things) allows drivers to make the following pre-recorded announcements:

This can then be followed up with:

(2) “Customers are required to make space for a wheelchair user. The bus will wait while this happens”.

All colleagues receive initial training and regular updates on a range of issues, including wheelchair access. Please be assured the company takes any such complaint very seriously and is happy to investigate further. I can also offer a ‘behind the scenes’ visit to Orpington Garage for Paula to see how we manage these matters.

* I appreciate Paula refers to her “tri rollerator walker”, not a wheelchair.

Despite being given details of Peters’ accusations, Clarke’s response shows that Go-Ahead and Metrobus still do not understand the importance of tri-rollators, and their implications, for disabled people. Because Clarke apparently did not see Peters’ situation as being as important as that of a wheelchair user. Also, Clarke’s response shows the lack of awareness of PoTS – which, as NHS Choices states, is: “an abnormal increase in heart rate that occurs after sitting up or standing. It typically causes dizziness, fainting and other symptoms.” Sadly, Go-Ahead’s response is endemic of a broader lack of understanding of so-called ‘invisible illnesses’.

All of this comes amid the UN saying that the Tories have created a “human catastrophe” for disabled people in the UK. It has now reported three times in the space of a year on human rights violations by the Conservative-led government. And in one report, it (like Peters) said the Tories had helped to create a public perception where disabled people:

have been… negatively portrayed as being dependent or making a living out of benefits; committing fraud as benefit claimants; being lazy and putting a burden on taxpayers, who are paying ‘money for nothing’. Persons with disabilities continue to experience increasing hostility, aggressive behaviour and sometimes attacks to their personal integrity.

Peters’ story is one of many. But it is a damning indictment of Britain in 2017 for disabled people. One where other people abuse and discriminate against them, and deny them services on an almost daily basis. And they have, in part, seven years of Conservative-led governments to thank for this.