Jeremy Corbyn was asked if Theresa May had any 'good points' on LBC. He gave a very honest response. - Canary Workers’ Co-op 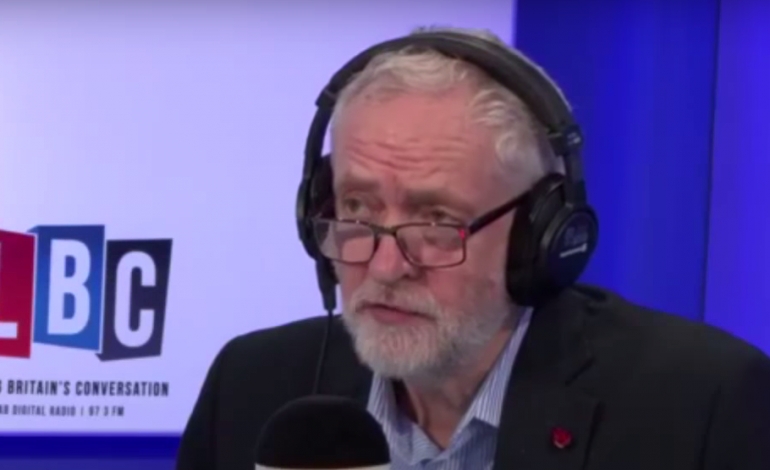 Jeremy Corbyn spoke to LBC on 27 October. And presenter Sadiq Khan, the Mayor of London, asked him if Theresa May had any “good points”. The Labour leader praised her for moving forward on transgender rights.

Because May delivered a speech at the PinkNews Awards on 18 October. She said the government would make sure the Gender Recognition Act is reformed so that trans people can more easily change their legal gender. May added that:

… being trans is not an illness and shouldn’t be treated as such.

We must advance trans rights, and discrimination has gone on too long. Bring forward a Bill to update the Act and improve trans rights and Labour will back you.

On LBC, the Labour leader did point out that May now supports reform “under demand”. But he commended the decision, along with May’s work on modern day slavery. Corbyn has also previously said:

I am delighted that the Government has listened to the demands of LGBT activists and is following Labour’s manifesto commitment.

Labour’s manifesto included proposals to protect trans people from hate crimes and discrimination. It also included plans to reform the Gender Recognition Act. This was absent from the Tory manifesto.

Why is reform being called for?

Currently, the law means that trans people have to go through a lengthy bureaucratic process to alter their legal gender, taking two years. Following calls from trans rights campaigners, Corbyn backed a ‘self-declaration’ system in order to eliminate these hurdles.

Equalities Minister Justine Greening said the government would streamline the whole recognition process. Currently, for example, if you want to change your legal gender, you have to first receive a diagnosis of gender dysphoria before being able to apply to do so. The government is considering removing this requirement. Suzanna Hopwood, of the Stonewall Trans Advisory Group, believes this mandatory diagnosis, and the requirement for an “intrusive” interview panel, should be scrapped.

UK not a safe place for trans people

There is pressure to bolster the legal rights of trans people because of the high levels of discrimination and abuse that those in the community face. Stonewall’s Chief Executive, Ruth Hunt, says that the UK is currently an:

Britain is at an absolute crisis point in how it treats trans people.

Earlier this year, a study by Stonewall found that over four in every five trans schoolchildren had self-harmed. And nearly half had attempted suicide.

Trans people in the UK are frequently subjected to harassment, abuse, bullying, discrimination and attacks “simply for existing”, as Hunt puts it. Reforming the Gender Recognition Act will improve trans rights, but more will need to be done to prevent the high levels of discrimination and mental health issues experienced by the trans community.

– Join The Canary, if you appreciate the work we do.