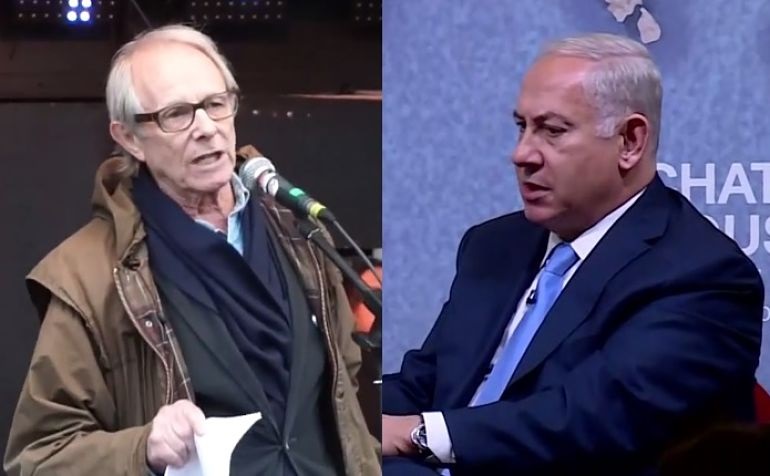 The Palestine Solidarity Campaign (PSC), along with other organisations, held a rally and march in London on 4 November. According to the organisers, the Make it Right for Palestine event attracted around 15,000 people. It followed the 100-year anniversary of the Balfour Declaration.

Loach spoke at the event. You can watch the full speech here:

Loach urged people to support the cultural and academic boycott of Israel. Because he said that the Israeli state uses arts and culture to “show their pretty face”. And he argued [4:05]:

They have no pretty face.

Loach was, of course, making this assertion because of the Israeli authorities’ treatment of the Palestinians. And less than a day later, Netanyahu showed why Loach, and many others, hold this view.

On The Andrew Marr Show, the Israeli Prime Minister spoke about Palestine. Specifically, Marr asked him about the two-state solution, whereby Palestine would be in control of, and recognised as, an independent state. If this were to happen, Israel’s 50-year occupation of Palestine would have to end. Marr said [34:20]:

If you talk to almost any British MP, they say two state solution… the way you are talking it sounds as if the two-state solution is more or less over and we’re moving to a different solution, a one state solution.

No, I don’t want a one-state solution, I’ll be clear about that… but I want to make sure that what we have next to us is something that will not threaten our lives. It really makes a difference what the other state is.

He went on to explain an acceptable form for the “what” existing next to Israel. It needs to be demilitarised, he said. And it needs to recognise the state of Israel. He argued we should be “more specific” about what a Palestinian state should look like.

So Netanyahu essentially rejected the two-state solution. Because a Palestinian state isn’t independent if Israel doesn’t allow it to have a military or defend itself. No state is independent, of course, if others dictate its terms of existence. He also, however, absolutely rejected the one-state solution: Palestine integrated into Israel and its people granted equal rights with Israeli citizens.

And if moves towards either solution don’t happen, the Palestinians will remain under occupation. One where the small amount of land they still hold diminishes rapidly, as Netanyahu’s government builds more and more settlements on it.

In short, it appears that Israel isn’t planning to grant real freedom to the Palestinians, in any shape or form. No wonder then that Loach described the Israeli authorities in such ugly terms.