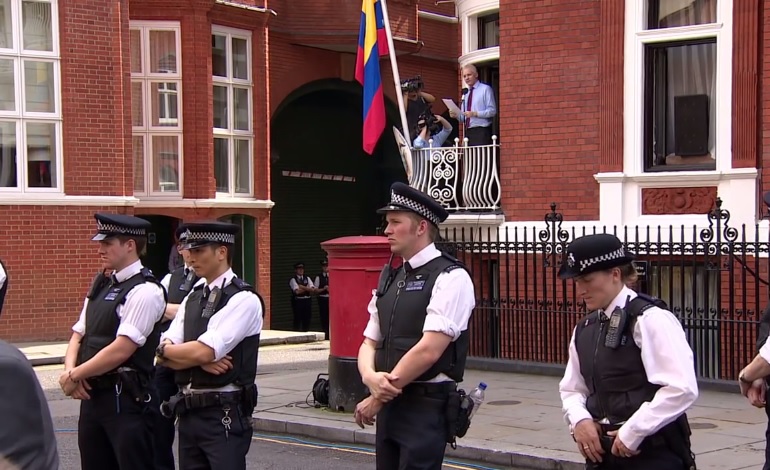 The UK government spanked over £12m of taxpayers money on a controversial police operation for years. But it secretly said that costs were not an issue in the matter.

That will come as a surprise to most. Because the government has argued for hefty police cuts on the basis that money is an issue. And the government’s private confession about public finances is not the only recent revelation in this case.

Stefania Maurizi is an Italian journalist. She has been digging into the arbitrary detention of WikiLeaks founder Julian Assange in the Ecuadorian embassy. During her investigation, she has submitted multiple Freedom of Information requests to the UK authorities for documents relating to the case. Not much information has been forthcoming, however, so Maurizi is taking the UK government to court on the 13 November.

One document she did manage to get hold of though relates to the eye-watering costs of the police operation. The Metropolitan police surrounded the Ecuadorian embassy between 2012-2015 at a cost of at least £12.6m. Scotland Yard said that “resources are finite” when ending the siege. But the document suggests the UK government didn’t view the costs in the same way:

One of the emails on @wikileaks founder @JulianAssange released to @SMaurizi for our #Foia pic.twitter.com/MR82w221QC

The unnamed official is corresponding with Swedish prosecutor Marianne Ny. She was investigating a series of allegations against Assange of a sexual nature. Sweden has now dropped this investigation. The UK police operation was supposedly an effort to capture Assange, who had taken refuge in the embassy, and hand him over to Swedish authorities. And as the email shows, officials did not consider costs of that police operation “a relevant factor in this matter”.

But officials’ laid-back attitude about costs is not the only revelation Maurizi’s probing has turned up. The Crown Prosecution Service (CPS) has now admitted it destroyed key emails related to Assange. In advance of the court case, the CPS wrote to the journalist and her lawyers saying:

all the data associated with Paul Close’s account was deleted when he retired and cannot be recovered.

Close was the CPS lawyer aiding Sweden’s investigation. And Maurizi calls this a “questionable choice” as these emails are relevant to a “controversial and still ongoing case”. She added, “I think they have something to hide”.

Furthermore, Maurizi has discovered that the UK explicitly advised Sweden not to visit London to interview Assange over the allegations. Assange and his lawyers had offered such an option, which is apparently common practice. Between 2010 and 2015, the UK reportedly accepted 44 requests from Sweden to interview witnesses or suspects in the country. But the failure of authorities to arrange such an interview in Assange’s case is, in part, why he stayed in the embassy for over five years. And it’s why UK taxpayers got a £12m policing bill.

Assange has long suspected that if he left the embassy the UK authorities would extradite him to the US. And Assange has remained in in the embassy since Swedish prosecutors dropped the allegations because of this threat. The country has a sealed indictment ready for his prosecution and senior US officials are reportedly examining specific charges against him for his WikiLeaks releases. The UK government’s actions will do nothing to dampen suspicions.

The tribunal, starting on 13 November, may throw more light on the UK’s role in Assange’s detention. The case, of course, is very important to Assange’s freedom. But it also has massive ramifications for journalistic freedom in the UK. And it could reveal much about the government’s priorities, its “special relationship” with the US and why it’s really still planning to arrest Assange if he leaves the embassy.

So the more we know about what the UK has been up to, the better.