It’s Remembrance Sunday. But as ‘Theresa May lays a wreath, children in Yemen could be killed with British made weapons'. - The Canary 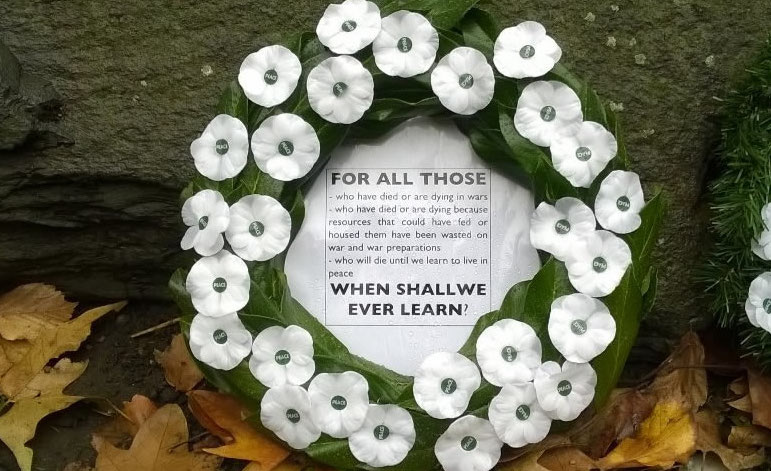 In the lead up to Remembrance Sunday, red poppies are seen everywhere. Indeed celebrities are criticised for not wearing them. But since 1933, the white poppy has also been a powerful symbol of remembrance. To remember all those who died in wars, and as a poignant reminder that war kills without discrimination. And that the way to end war is to focus on peace.

But although growing numbers of people now choose white poppies, this has led to a rise in hate crime and online attacks. Symon Hill, coordinator of the Peace Pledge Union (PPU) spoke to The Canary to address some inaccuracies spread recently by mainstream media about white poppies. And he also raised powerful questions about a government that actively engages in funding conflict.

The Women’s Co-operative Guild first gave out white poppies in 1933. Hill explained that the white poppy has three main messages:

Firstly, to remember all victims of all wars: civilians, the armed forces and civilians of all nationalities. Secondly, to reject militarism and any attempt to glorify or to celebrate war. And thirdly, to commit to campaigning for peace.

Insist that red poppies only represent British and Allied armed forces and personnel. So this doesn’t include British civilians let alone other nationalities. And they also support the British armed forces as an institution: increasingly they use lot of militaristic and nationalistic rhetoric.

Hill, and the growing numbers who wear white poppies, are not critical of anyone who wears a red poppy. But there is a rise in abuse towards those who choose this symbol of peace.

Hill told The Canary, “We’ve seen a sharp rise in abuse towards white poppy wearers this year.” And he went on to say, “We’ve seen a rise in sexist and homophobic content saying only ‘real men’ wear red poppies.” Hill explained:

I’ve been involved in lots of campaigns and peace issues. And I’ve never experienced the level of abuse that you get if you criticise red poppies… it’s as if some of the armed forces most enthusiastic supporters can’t cope with hearing any other points of view.

I think that it’s very dangerous to suggest that we should only remember the British dead and and imply that non British lives are less valuable, especially in a context where hate crime and racism and xenophobia are on the rise.

And it seems that some of this has emerged from inaccuracies and bias spread by the mainstream media. Hill said:

We’ve also seen The Daily Mail (and others) spread inaccurate information about white poppies. Bel Mooney said that children will be given a white poppy instead of the red poppy. This isn’t true. In some schools white poppies are sold alongside red ones. And those schools run lessons and assemblies where they help young people to explore and think about arguments for and against red and white poppies. And they’re right because this is what education should be about. It’s the very opposite of ‘indoctrinating children’ as Richard Kemp [in The Sunday Telegraph] accused us of.

Peace in our time?

Speaking about white poppies in 2017, Hill is openly critical of Conservative government policies:

We have a government who will be talking about Remembrance this weekend while running one of the largest military budgets in the world. They’re putting billions of pounds into the renewal of trident nuclear weapons. We’ve just seen the resignation of Priti Patel over breaking the ministerial code. But what she was allegedly doing was talking to Israeli ministers about diverting aid money to fund military operations.

And as The Canary has reported, this government’s sale of arms to Saudi Arabia has devastating consequences. Hill said:

And perhaps worst of all we’ve got a British government selling weapons to Saudi Arabia. Those weapons are targeting – not just accidentally killing – but targeting civilians in Yemen. Children in Yemen could be killed with British made weapons at literally the same time that Theresa May lays a wreath at the Cenotaph on Sunday. A wreath that supposedly commemorates victims of war.

Not in my name

But one of the reasons many people choose white poppies, is a growing mistrust in military operations conducted by the British government. As Hill explained:

After the invasion of Afghanistan in 2001 and Iraq in 2003, a large number of the British population didn’t support actions British troops were engaged in.  But since then the establishment has talked increasingly about ‘support for the armed forces’. So we’ve had Armed Forces Day in 2009 and the doubling of cadet forces in schools since 2016.

But as Hill points out, this stands in direct contradiction to the way those returning from military conflict are treated:

Actually those who make these arguments show very little respect for the veterans who are dumped on the street and live in poverty after war. But they encourage uncritical applause for the armed forces. And we’ve seen that become a much bigger thing in the last decade and the growth in the British Legion’s militaristic rhetoric is part of that wider picture.

Hill acknowledges that the British Legion, “do some good charitable work for British veterans”. And he is clear that, “we certainly wouldn’t discourage anyone from donating to charities that help those affected by war”. But he highlights some of the bigger issues veterans face in Britain:

Militarism recruits people with lies to the armed forces, sends them to fight and then dumps them into poverty when they when they get back. But that’s how militarism has always worked around the world and throughout history. We have 7000 ex armed forces personnel living homeless in Britain.

I’d have more respect for certain military charities if they were to speak out against cuts to the welfare state, disability services and the lack of investment in affordable housing. Why should British veterans rely on people rattling tins in the streets?

So for many of us, Remembrance Sunday is an opportunity to reflect on the true cost of wars: past, present and future. And as more people wear white poppies, the message is clear: end wars now.

– At 12pm on Sunday 12 November, The Peace Pledge Union will hold an “Alternative Remembrance Sunday Ceremony” in Tavistock Square, London.

– But wearing a white poppy, wherever you are, is a powerful commitment to peace.