Today, Corbyn offered more support to Grenfell survivors than May has in the last six months - Canary Workers’ Co-op 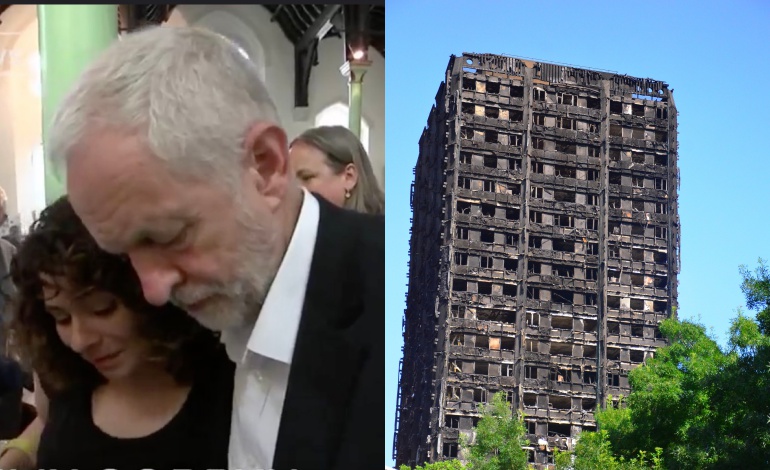 On 14 December, Labour leader Jeremy Corbyn tweeted a short film to acknowledge the six-month anniversary of the Grenfell Tower fire. And in 60 seconds, he offers more support and solidarity to the survivors and victims of the fire than Theresa May has in six months.

Corbyn offers “love and solidarity” to the survivors of the fire. And he also honours the 71 people who tragically lost their lives.

But he goes further when he says:

There is no better tribute than justice.

Because although Theresa May promised that “everybody affected” would be offered a new home “within three weeks”, this hasn’t happened. And six months after the fire, 166 households still don’t have permanent housing.

But as Corbyn explains:

From Hillsborough to Orgreave, our country has a history of working class people’s voices being ignored by those in power.

And he offers a clear challenge to May to “restore residents’ trust” in the Grenfell Tower Inquiry.

We must ensure the victims, survivors and community get justice. pic.twitter.com/1uK7YdVj7i

The public inquiry into the fire has been widely criticised for its “narrow terms of reference”. And local residents have called:

for changes to the Public Inquiry so that the voices of the bereaved, survivors and the community will be heard.

To coincide with the six-month anniversary, local residents and survivors launched a government petition that calls for May:

to exercise her powers under the Inquiries Act 2005 to appoint additional panel members with decision making power to sit alongside Chair in Grenfell Tower Inquiry: to ensure those affected have confidence in and are willing to fully participate in the Inquiry.

Concerns about the inquiry are so significant that the Equality and Human Rights Commission (EHRC) has launched a separate inquiry to establish:

if both the Government and local council failed in their duty to protect life, prevent inhuman treatment and provide safe housing.

Corbyn’s 60-second speech goes straight to the heart of this tragedy. He’s right to insist that a disaster of this scale “cannot happen again”. But if “working class people’s voices” are “ignored”, there is a terrifying possibility that lessons will not be learned.

So on the same day that lost lives are honoured, let’s also support the residents fighting so hard for justice.