As fracking protests continue, new evidence reveals the health risks of living near one of these sites - Canary 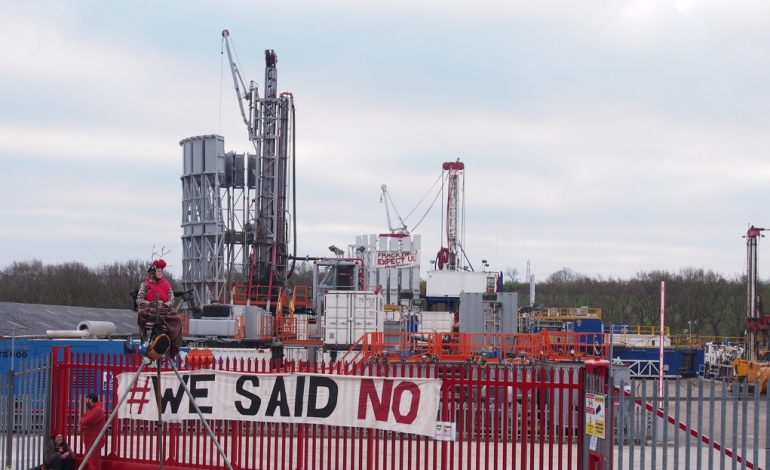 Anti-frackers continue to stage protests against the establishment of fracking sites in their local communities. In particular, there are concerns that drilling for shale gas poses public health risks. And now, a new study could give protesters another reason to oppose fracking on these grounds.

Research published in the Science Advances journal reveals that living close to a fracking site can be linked to lower birth weight. While the Conservative Party backed fracking in its 2017 manifesto for economic reasons, this study emphasises how these sites can affect local people.

Scientists from the University of Chicago, Princeton University, and the University of California, Los Angeles, analysed data on over 1.1 million births in Pennsylvania over a nine-year period. And findings show that women who lived within a kilometre of a fracking site gave birth to babies with worse health outcomes and lower birth weight. Women who lived more than 3km from a well, on the other hand, experienced fewer issues of this kind.

Relevance for the UK

Not everyone protesting fracking in the UK lives within 3km of a well. But many households [paywall] are situated within 1km of a fracking site. And as The Canary previously reported, fracking firm Cuadrilla has faced accusations of ‘bribery’ for paying residents in Lancashire £2,000 if they lived this close to its site.

It isn’t clear, however, if this recent study about fracking and birth weight would apply to local residents in the UK. The Onshore Energy Services Group (OESG) highlights that the regulatory framework for fracking in the UK “encourages continual improvement”, with rules “applied uniformly”; whereas in the US, “there’s less emphasis on operators to strive to go beyond the minimum compliance requirements”, and “the rules differ from state-to-state”. So conditions aren’t exactly the same.

A systematic review of links between fracking and human reproduction, meanwhile, shows there is “moderate evidence” of:

Authors behind the review point to “endocrine-disrupting chemicals” used in fracking as a possible source of the health concerns they noted. But again, due to differences in regulation, these problems could be US-specific.

While many questions about fracking remain unanswered, local residents who live close to wells still cite public health risks as one of their worries. And demonstrations continue. On 14 December, Residents Action on Fylde Fracking gathered outside Lancashire County Hall with placards and leaflets to oppose fracking in the local area.

Public support for fracking is also at an all-time low, mainly due to environmental concerns. And although the government and councils claim that risks to public health are minimal, local residents aren’t convinced. The latest research is only likely to add to those doubts.

– Read more articles from The Canary on fracking.