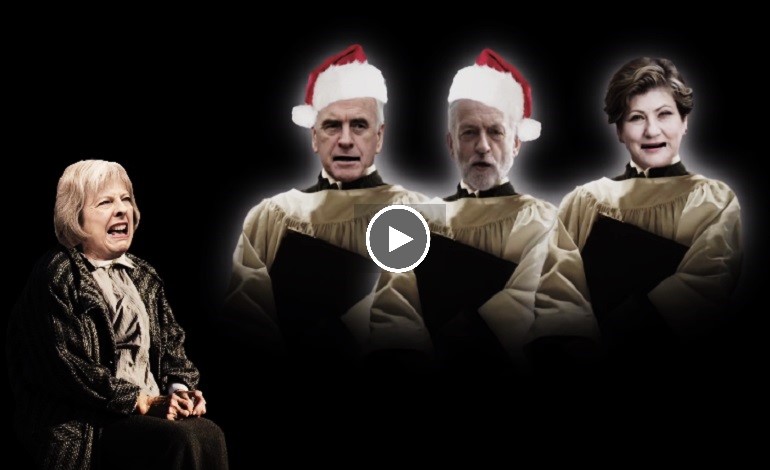 It’s almost Christmas, and with that in mind a filmmaker has delivered a hilarious festive ditty to warm everyone’s spirits this December. Everyone except, that is, Theresa May; who is the butt of this latest track aiming for the Christmas charts.

Bonnie Prince Bob, who was behind the general election satirical film Jeremy Bernard Corbyn: What Was Done, has released a Christmas anthem. Called Will You Last Till Christmas? and performed by the mysterious ‘Brexmas Puddings’, it charts May’s journey from the somewhat ill-fated general election to a Christmas filled with potential disaster. And the journey is funny and sharp-witted in equal measure.

The track asks May:

Will you last till Christmas?

Do you still have time?

Will Larry, you and Philip

Enjoy the mistletoe and wine?

Commissioned for independent news site Bella Caledonia, Will You Last Till Christmas? is available to download now. And The Canary caught up with Bob to find out about his inspiration for the track.

Bob is not a filmmaker by trade. He is actually a music producer, working predominantly with reggae and dancehall artists, and also more mainstream pop. But he says his work is always led by “socio-political themes”. And while What Was Done plays heavily into this, Will You Last Till Christmas? is more satire-led. Bob told The Canary:

Mike Small from Bella Caledonia asked if I could create a little piece of festive satire for his website. Bella has always been very supportive of my work, so I was happy to oblige. There wasn’t much time, so a novelty Christmas song seemed apt. I roped in Shaun Milne, who I collaborated with on What Was Done, to put together the very amusing video. And the Brexmas Puddings? They are a secretive bunch… But there’s a very talented young lady called Scarlett Belle who performed backing vocals.

Will You Last Till Christmas? takes swipes at several people involved in the Conservative government: from ‘master of spin’ Lynton Crosby to Boris Johnson, via Labour’s ‘carol singers’ Corbyn, John McDonnell and Emily Thornberry. The Canary asked Bob just how long he thinks the actual Conservative government will really last. He said:

Theresa May’s government is a daily farce. The Tories and neoliberal establishment have kept her on life support because they are so petrified of a Corbyn administration. If she does ‘last till Christmas’, I think she will perform a contrived ‘entrusting of power’ speech to an elected successor in the new year. Then, we will have to endure another pantomime of the elites in the form of a Tory leadership contest…

And Bob has a clear hope for the new year:

Another general election. We need these blundering entitled delinquents removed from power ASAP.

Will You Last Till Christmas? is a delicious, satirical swipe at the chaotic May administration. So if you’re looking for some light relief this festive period, it’s surely worth a download. Unless, of course, you are Mrs May…

– Download Will You Last Till Christmas? on your preferred platform.

– Support Bella Caledonia and The Canary.