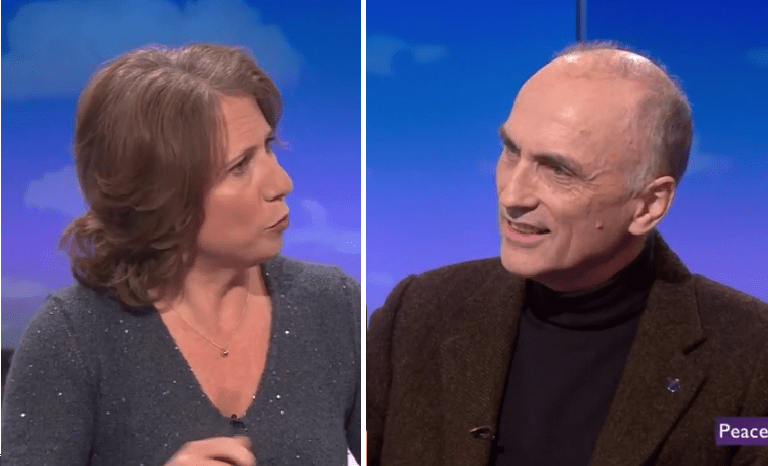 The BBC tried to defend a media “blackout” on Jeremy Corbyn winning an international peace prize. It didn’t go well.

On 8 December, the Labour leader received the Séan MacBride Peace Prize from the International Peace Bureau (IPB). Founded in 1891, the IPB is one of the world’s oldest peace organisations. But not a single mainstream media outlet seemed to report on Corbyn winning the award, sparking allegations of institutional bias.

Why do you think there is a conspiracy amongst UK mainstream media to suppress positive stories about Jeremy Corbyn?

The Shadow Minister for Fire and Emergency Services responded [0.11]:

Well, you tell me. But it’s pretty clear that there was a media blackout… Let’s remember, when… there was a photograph of Jeremy wearing a tracksuit, it made front-page news. When Theresa May put a star on the top of a Christmas tree, there was wall-to-wall coverage, as there was of William and Kate being awarded a Blue Peter badge. And here we have the leader of the opposition being… awarded a prestigious peace award being completely ignored.

There was indeed wall-to-wall media coverage when royals William and Kate recently won a Blue Peter badge. And as Williamson says, there was apparently nothing on the leader of the UK opposition winning an international peace award.

While Corbyn received the award on 8 December, the IPB announced it in September. With this in mind, Coburn later suggested [2.12] that the media didn’t cover the award because Labour didn’t speak up enough:

None of the official Labour media accounts or even Jeremy Corbyn himself actually publicised it. Do you think that is the problem?

The MP for Derby North pointed out [2.20] that the story went viral on social media:

No. I think the problem is very clearly with the mainstream media who simply ignored it, even when it went viral on social media.

Meanwhile, Channel 4 FactCheck argues that there was no coverage of Corbyn winning because the media doesn’t generally report on the award. But Dave Webb, vice-chair of the IPB board, points out that the people who win it are rarely mainstream figures. They do tend to be distinguished anti-war and anti-nuclear activists, who the media has a history of marginalising. They do not tend to be among the most high-profile people in Britain.

Still, no mainstream media outlet covered it. So Williamson called out the “blackout” on the BBC. Apparently, we have a media that values a royal couple winning a Blue Peter badge far more than the elected leader of the opposition winning an international peace prize. The topsy turvy coverage would be funny if it didn’t have such far-reaching implications.