Evidence released as part of the Chilcot Inquiry has revealed that the government deliberately manipulated the news agenda in order to take the country to war in Iraq, and the mainstream media were happy to lap up its lies.

A letter, sent more than a year before war was declared, sets out the government’s media strategy and objectives for ensuring public support for the conflict. Penned by John Williams, the head of news for the Foreign Office, the document was sent to, amongst others, Alastair Campbell at No 10, all ministers and some diplomats. 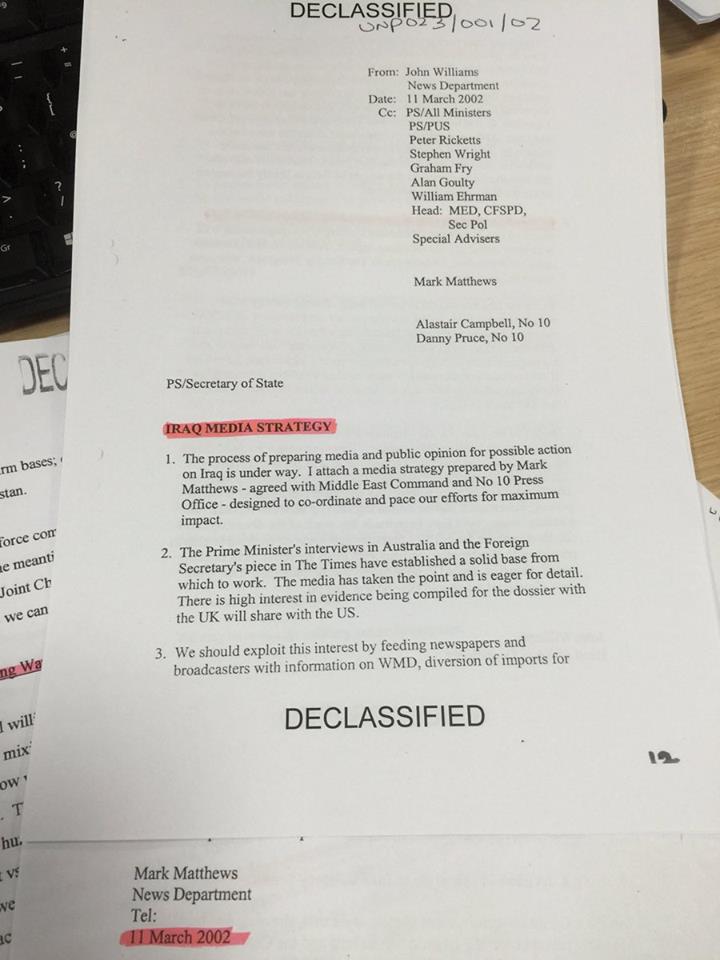 The strategy starts with a very telling sentence:

The process of preparing media and public opinion for possible action in Iraq is under way.

The document recommends that the government should “exploit” interest by “feeding newspapers and broadcasters with information on WMD, diversion of imports for military use, and human rights abuses”.

However, Williams wasn’t content to just see papers such as The Sun and The Telegraph propagate the party line. He wanted to enforce the message across the mainstream media:

The outlets for this information should cross the spectrum, so that we can encourage support from sympathetic newspapers and carry the argument to those likely to criticse our policy. It is as important to force the reality of Saddam’s Iraq on papers like The Guardian, as it is to give papers like The Sun the chance to popularise our case.

This choice of words is key. It wasn’t enough for the media strategy to present the facts and let the media analyse them – the government’s plan was to “force” its pro-war agenda on all elements of the media, and therefore the public, a year before the conflict started.

Williams then reveals the extent to which the government was willing to go to plant articles in the sympathetic media:

I suggest we produce a list of ten facts about Saddam for The Sun based on our assessment of Saddam’s attempts to equip himself with weaponry and abuse the sanctions regime. And we should give some quality information, for example to The Sunday Telegraph, who have expressed an interest.

Monbiot described The Sunday Telegraph as “by far the worst of these offenders”, and lists several stories the paper ran which “appear to be false”:

In September 2002 it reported that “Saddam Hussein is developing frightening new ways to deliver his arsenal of chemical and biological weapons, including smallpox and the deadly VX nerve agent.”(15) Another report on the same day claimed that “Saddam is on the verge of possessing crude nuclear devices that could be “delivered” using “unorthodox” means such as on lorries or ships. … Saddam has the capability to assemble all the components required to make nuclear weapons.”(16) In February 2003, it claimed that “Iraq’s air force has advanced poison bombs”.(17)

These stories can all clearly be linked to the first objective of the media strategy:

To convince people of the real threat to their safety and security from Iraq’s biological, chemical and nuclear weapons programmes.

One of the main purposes of the document seems to be to lay the foundations for both domestic and international audiences for war. Again, this is very clear in the objectives:

To prepare public opinion in Britain and abroad (especially the Muslim world and Europe) for possible military action.

Under the “potential pitfalls” section, the memo outlines how the Muslim world needed to be prepped for the conflict:

The public opinion, especially in the Arab and Muslim worlds, will be overwhelmingly opposed to military action unless we start preparing for it now.

As part of an effort to convince Muslim populations that war was a good idea, the government planned to:

However, as the Chilcot Report has shown, the preparations for rebuilding and stabilising Iraq after the conflict were “woefully inadequate”. Not only were people lied to, the consequences of these lies have been disastrous and deadly.

The lies and manipulations did not end with this document – they carried on right through the war. The Sun, who this week ran headlines such as “PATH TO IRAQ AND RUIN Chilcot savages Blair for rushing into poorly planned and illegally dodgy Iraq War”, has conveniently forgotten the crucial role it played in supporting and encouraging that war.

For example, the Lib Dems, under Charles Kennedy, voted against the war. In response, The Sun ran the following headline:

We should remember Charles Kennedy today, and how the press treated him. And how he has been vindicated. #Chilcot pic.twitter.com/Xi75yI3FRu

In fact, The Sun’s coverage of the war led one of their feature writers, Katy Weitz, to resign. Weitz resigned on the first day of the war when the paper’s coverage screamed the headline “Show them no pity… they have stains on their souls”.

Meanwhile, journalists sympathetic to the government’s agenda were embedded among the troops on the ground, supposedly to give us a perspective from the frontlines. However, often this meant they were so close to the military, they were unable to report from a neutral position.

In Leading to the 2003 Iraq War: The Global Media Debate, edited by A. Nikolaev, E. Hakanen, a BBC journalist explained the reality on the ground:

BBC journalist Clive Myrie agreed that embedded journalists were spoon-fed information although he tried to check facts. He added, “I didn’t wear a uniform, but I lived in the same way as the marines, looking at the tiny window of life inside combat, in a prison provided by the marines”.

The book also reported that:

Another embedded journalist became so close to the troops that he even acted as a lookout for suspicious vehicles.

The Chilcot Report has been damning – concluding that Tony Blair manipulated the evidence which was presented as a case for war, and that there was a “far from satisfactory” legal basis for the conflict. Chilcot further found that there was “no imminent threat from Saddam Hussein” and that:

the UK chose to join the invasion of Iraq before the peaceful options for [Iraq’s] disarmament had been exhausted. Military action at that time was not a last resort.

Now we know the role the UK media played in delivering the government’s media strategy which, as can be seen from this document, was to start lying the public into war a year ahead of time. It should be the duty of every journalist, and every editor, to thoroughly review and challenge the lines fed them by government spin doctors – especially when the stakes are as high as war. Instead, the UK media collectively abdicated that responsibility, in favour of becoming cheerleaders-in-chief for a military folly which has resulted in continuing catastrophe for the country, and the region.

Moreover, this document shows how important it is to have media outlets that are independent of government agendas. Hopefully, thirteen years later, with the advent of social media, and the rise of new media outlets, we are in a better position to be able to expose the lies of governments.

Revealing the media’s complicity in trumpeting government propaganda in the Iraq War is as vital as finally revealing Blair’s manipulation of his “dodgy dossier”. Without this complicity, the shaky support for going to war would have been even weaker, and it is possible that the conflict could have been averted.

The mainstream media was instrumental in making this conflict happen, and anyone who believes we live in a country with a free press needs to seriously look at the wording of this document. Unfortunately, the manipulation exposed by the letter is unlikely to be an isolated incident – but it is a much-needed example of exactly how government departments manipulate the mainstream media to suit their political agendas.

See more from The Canary on the Chilcot inquiry, the invasion of Iraq, and Daesh.