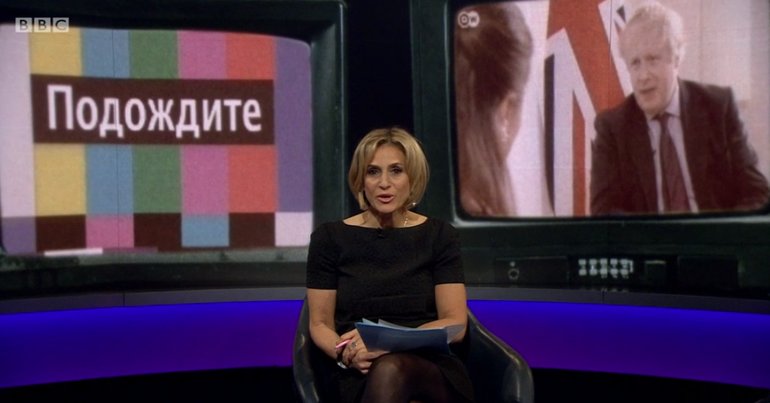 The foreign secretary has been caught on camera misleading the UK public and international community on the Salisbury poisoning. This is where the UK media should be applying pressure, asking questions and (in a decent world) forcing a resignation. Instead, the establishment media is vilifying the people doing that job, and backing Boris Johnson. BBC Newsnight showcased this hypocrisy last night.

What we know for a fact, is that Boris Johnson told German TV:

The people from Porton Down… They were absolutely categorical. And I asked the guy myself. I said, ‘Are you sure?’

Boris Johnson’s Foreign Office now deleting tweets from their official account that stated the nerve agent was produced in Russia. What on earth is going on? This tweet below is now deleted. pic.twitter.com/DEHkMTDimI

Porton Down refutes the claim, stating categorically that it could not confirm the nerve agent came from Russia. Gary Aitkenhead, the chief executive of the government’s Defence Science and Technology Laboratory, told Sky News:

#Newsnight
You know it already. Yet you will protect him. Instead you will continue with your lies about @jeremycorbyn & the wonderful #Jewdas

Boris Johnson's words simply cannot be reconciled with the words of the chief executive of Porton Down.pic.twitter.com/n3rep2ggCi

This does not absolve Russia of responsibility. Russia and other potential suspects should remain part of an open investigation until authorities gather stronger evidence. What it does mean is that Boris Johnson misled the public. The question our media should be asking is: was this a wilful abuse of power?

That is not what’s happening.

Instead, when Jeremy Corbyn challenged the foreign secretary on the matter, Boris Johnson accused him of “playing Russia’s game and trying to discredit the UK”. And the media dutifully rallied to Johnson’s side.

Last night’s BBC Newsnight was not framed around the fitness of Boris Johnson to be foreign secretary. Instead, the negative focus was once again on Jeremy Corbyn and the left being Putin’s ‘useful idiots’ for asking questions. Declaring an ‘information war’ afoot between Britain and Russia, the show concluded that those challenging Johnson have basically picked Russia’s side in that war.

Samuel Green, director of the Russia Institute at King’s College London, was invited on. He grouped Jeremy Corbyn in with the Russian state and its RT television channel, claiming:

As your report suggested, right, it’s not from the Russian perspective so much about getting people in the UK… to believe an alternative narrative. It’s about creating room for doubt in the official narrative.

Will people in Britain be more confused tonight about the Salisbury attack than they were before? Director of the Russia Institute at King’s College London @samagreene tells #newsnight pic.twitter.com/aOo0Aa9POq

I don’t think any harm has been done.

“It has not changed by one iota the solidarity of the international community condemning Russia… I don’t think any harm has been done” says former foreign secretary @MalcolmRifkind #newsnight pic.twitter.com/P4HP1cPYbY

BBC Newsnight put no other take on the situation on the table. And viewers could scarcely believe what they were watching:

Last night #Newsnight got to grips with the #BorisJohnson lie debacle. Except it didn't. Its feature on Johnson was about how #Russia is winning the 'information war' and how the the UK Gov isn't up to scratch. BoJo was used only as an example of this 1/ https://t.co/FGpt5z1iiF

Fantastic to see #Newsnight holding a debate on Russia between three people that agree with each other. Very enlightening.

BBC’s strange wording frames a *fact* about Boris Johnson as a Labour claim. Why? @franunsworth

Sadly #borisjohnson is going to keep his job despite lying to the citizens of Britain and most likely our allies about what he was told about #Novichok by #PortonDown b/c most pundits will spend their time telling people about how Corbyn an opposition leader will ruin Britain.

The media as one

And so it continued across the BBC. BBC News literally ran footage of Corbyn playing with a Russian doll during a segment on the poisoning:

This is comletely unbelievable – BBC shows Corbyn playing with a Russian doll https://t.co/YCN0RrjiCj via @YouTube

During the BBC News paper review, Jane Merrick of The Times, New European and other outlets repeated the spin job unchallenged, saying:

Jeremy Corbyn is… taking the word of the Russian government rather than the British government. I think that’s quite worrying, actually.

And the same spin was echoed by supposedly liberal journalists all day:

We interrupt this holiday to observe:
Boris Johnson is a dissembling liability who makes every situation he goes near worse.
The idea that the Skripals were targeted by anyone but Putin is daft.
Our intelligence services know more about our enemies than Jeremy Corbyn’s cultists.

Boris, novichok and how Putin plays us. Me for @thetimes online now. https://t.co/CkgNlRQTBl

This is what happens in the Fake News age. A video of Boris Johnson on German TV is being broadcast. It supposedly shows him claiming Porton Down said the attack was from Russia. It doesn't. But no-one cares.

This wilful misrepresentation of the Skripal case is beyond bad journalism. It’s not any kind of journalism at all. It is propaganda, designed to pressure people into blind acceptance of the UK government’s official narrative, regardless of its authenticity or the ramifications of such uncritical obedience. Given the failures of the last 15 years, from Iraq to Libya, a rational person acting in good faith would view this case with a critical mind. That does not mean resorting to knee-jerk contrarianism like ‘the UK is bad so Russia is good’. It means exactly what it says: reviewing the evidence available, and interrogating that evidence along with the motivations and credibility of those producing it. The UK media is branding such basic common sense as tantamount to treason, again.