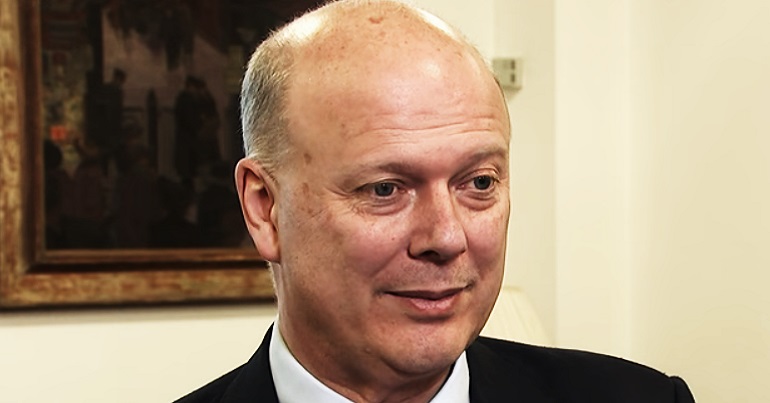 Transport secretary Chris Grayling just announced that the government would be underwriting at least £12m of risk over the HS2 rail project. But not content with giving a multi-million-pound guarantee to a private rail company, he sneaked the announcement out without consulting parliament first.

One campaign group told The Canary: “Grayling is nationalising the risk and privatising the profit”.

Currently, non-stop train services operate between Paddington station and Heathrow Airport. The service is run by Heathrow Express, a subsidiary of Heathrow Airport Ltd. But from August, FirstGroup’s Great Western Railway (GWR) will take over the contract. As Railway Gazette reported, the reason for GWR getting the contract was because:

there is no need to build a new depot to replace the current facility at Old Oak Common which Heathrow Express must vacate by the end of 2019 as part of the High Speed 2 [HS2] project.

As Grayling noted himself, handing the contract to GWR (a subsidiary of First Group) meant that “savings” would be “generated” for the government by not having to build Heathrow Express a new depot.

But now, due to risks that Grayling said the two companies “were unwilling or unable to assume or manage”, the government has stepped in. Grayling and the Department for Transport (DfT) have said they will underwrite three aspects of the contract:

Grayling called the £12.25m government guarantee a “conservative” estimate of the possible cost. The excuse he gave for not consulting parliament before using public money to underwrite risk to a private company?

Unfortunately, due to the urgent need to finalise the deal and the confidential commercial nature of the negotiations it was not possible to notify Parliament of the particulars of the liability and allow the required 14 days’ notice prior to the liabilities going live. A delay would have resulted in higher HS2 costs and an increased scheduling risk impacting on the December 2026 opening date for Phase One.

The DfT told The Canary:

It is nonsense to suggest the liabilities agreed are a subsidy for private companies. This agreement with Heathrow Airport and FirstGroup’s Great Western Railway has secured the future of the Heathrow Express services and will deliver improvements to passengers.

This also removes the need for a new HS2 depot to be built at Langley, saving taxpayers money.

The transport secretary has a history of decidedly odd deals with private rail operators. As The Canary previously reported, after pressure from the Association of British Commuters (ABC) Grayling “fined” the parent company of the notorious Southern Rail £13.4m. But part of that fine allowed the company to effectively have a ‘get out of jail free card’. That is, it was free from any future fines for poor performance, up until September this year. So the government will allow the current chaos on Southern Rail to happen, without recourse.

Perhaps it was the current chaos on the rail network that prompted Grayling to sideline parliament from being able to challenge his latest deal. Or maybe the transport secretary has something to hide? The campaign group We Own It thinks it knows the answer. It told The Canary:

Grayling is nationalising the risk and privatising the profit, over and over again. He hasn’t learnt from the failure of the East Coast line that private companies can’t be trusted to take on risks, and seems to be quite happy to sign off millions of pounds of public money to appease them. It’s time to take the railways into public ownership, where we can have proper public control.

Either way, at a time when Grayling and the DfT are both embattled, this latest sneaky move probably won’t go unnoticed by many for long.

This article was updated at 5:20pm on Tuesday 12 June to include a comment from the DfT.