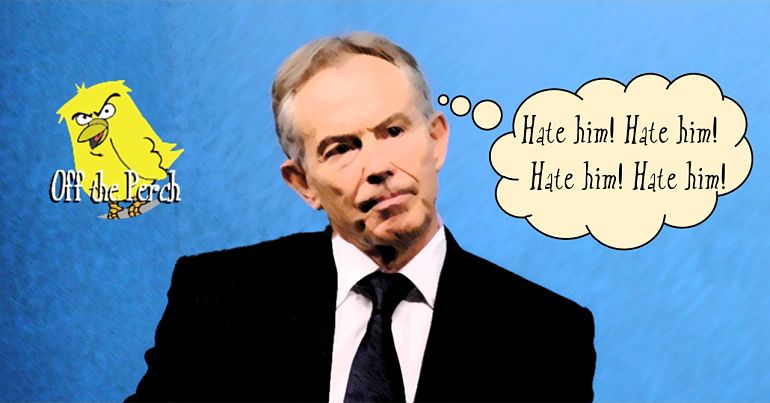 After a lifetime of diplomacy and respectfully keeping his opinions to himself, Tony Blair has finally spoken his mind. In uncharacteristically colourful terms, he made it crystal clear that he’s no fan of current Labour leader Jeremy Corbyn.

“He’s a massive arsehole”, Blair told Off The Perch, as we scuttled alongside him through the arrivals lounge at Gatwick. “Just look what he’s done to the party. It’s now full of students and techno DJs. Nurses and binmen are going to constituency meetings and suggesting policy ideas for conference. It’s certainly not the party I joined. We were all lawyers.”

If that veggie prat has his way, it’s going to be really hard for people who invested in PFIs to keep the repayments rolling in. I don’t know what’s going to happen to some of our great outsourcing companies. And the fucking hippy will probably try to get BAE Systems making windmills instead of Eurofighters.

The only chance we’ve got to save all that is to get the party back in the hands of people who know what they’re doing. Right now it’s no place for genuinely popular politicians like Liz Kendall or Wes Streeting. Take John Mann for example – constantly making good, constructive, points but the membership treat him like an idiot. We could drop David Miliband back into a safe seat and the poor guy would probably get deselected by some crowd of Trots led by Owen Jones.

Hate him. I fucking hate him. He’s so bastard popular, with his Glastonbury and his Seven Nation fucking Army chant. And I just know he’s going to get in and make a bollocks of everything I did. I shitting… I hate… I…

At this point, Blair’s entourage commandeered a side room and led him in for a lie-down. After the door had closed, a member of the security team told us: “It’s distressing, obviously, to see him in this condition. You can put in your piece that he’s ‘tired and emotional’ after a draining trip to Italy. Mr Blair tried to be all chummy and keep up but those far-right boys can really put it away. Might be best if you leave out some of the Corbyn stuff though cos Mr Blair likes to try and look statesmanlike. It’s good for business. Yeah, don’t print that either.”