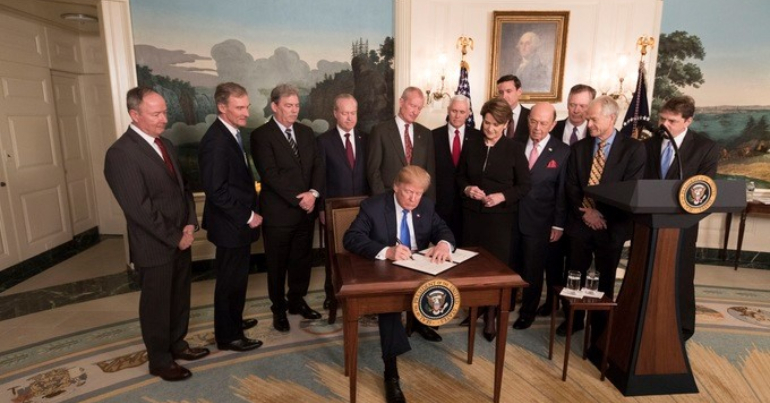 On September 5, the New York Times published an op-ed article by an anonymous member of President Donald Trump’s government. Titled “I Am Part of the Resistance Inside the Trump Administration“, it describes how “many of the senior officials in [Trump’s] own administration are working diligently from within to frustrate parts of his agenda and his worst inclinations”. The author states bluntly: “I would know. I am one of them”.

They add that meetings with Trump frequently “veer off topic and off the rails” and degenerate into “repetitive rants” that result in “half-baked, ill-informed and occasionally reckless decisions”. In addition to expressing the frustration that his erratic and impulsive pattern of behaviour causes to those around him, the author also characterizes his boss as ‘amoral’ – lacking in any clear, defining first principles on which to ground policy. His leadership style, meanwhile, is described as “impetuous, adversarial, petty and ineffective”.

In the same week, renowned journalist Bob Woodward, of Watergate fame, released a new book, Fear: Trump in the White House. The 448-page tome was based on extensive interviews with Trump’s inner circle, many of whom express the exact sentiments of the anonymous New York Times author. This includes chief of staff John Kelly, the most senior White House official, who reportedly described Trump to Woodward as an “idiot” and “unhinged”. Defense Secretary James Mattis, meanwhile, apparently described Trump as having the understanding of “a fifth or sixth grader” (i.e. a child between the ages of 10 and 12).

Indeed, the article adds to a long list of recent events that have hobbled the Trump administration. But to paint it as merely the latest nail in the coffin of his presidency, as many mainstream commentators are doing, misses a major significant feature that sets it apart from the average scandal.

It isn’t the same, for example, as incidents such as those last month involving Trump’s former campaign manager Paul Manafort and his personal lawyer and ‘fixer’ Michael Cohen. Rather, the contents of the article represent an admission by a senior government official that a state-within-a-state has developed within the Trump administration. And the fact that a group of unelected advisors are guiding policy and behind the steering wheel of power represents nothing less than a crisis of democracy.

Journalist and founder of The Intercept, Glenn Greenwald, issued a scathing and hard-hitting post on Twitter making just this argument. He describes the article’s author as a “coward”. Greenwald also points out the hypocrisy of labelling the Trump administration as “anti-democratic” when they belong to an “unelected cabal”:

The irony in the op-ed from the NYT's anonymous WH coward is glaring and massive: s/he accuses Trump of being "anti-democratic" while boasting of membership in an unelected cabal that covertly imposes their own ideology with zero democratic accountability, mandate or transparency

Or even a constitutional crisis

Others went so far as to describe the revelations contained within the article as signifying the emergence of a constitutional crisis. Even figures from the centre and centre-right have taken this position. Former Secretary of State and 2004 Democratic Party presidential candidate John Kerry said in an interview with CNN’s Anderson Cooper that the country faces “a genuine constitutional crisis”.

Overt defiance of presidential authority by the president’s own appointees—now that’s a constitutional crisis.

Trump, for his part, reacted in characteristic fashion. Questioned about the article by reporters during an unrelated meeting with the National Sheriffs’ Association, he described it as “really a disgrace” and questioned whether it had in fact been written by a White House official. Frequently turning his head as if he were addressing the answer to the gathered sheriffs, he said:

So if the failing New York Times has an anonymous editorial, can you believe it? Anonymous! Meaning gutless; a gutless editorial. Ugh! We’re doing a great job. The poll numbers are through the roof. Our poll numbers are great. And, guess what? No one is going to come close to beating me in 2020…

A recent ABC/Washington Post poll shows Trump has, in fact, the highest disapproval rating of a modern president since the 1940s, with 53% of respondents “saying they strongly disapprove” of his performance.

In a tweet published later that day, Trump demanded that the paper reveal who wrote it. Again he expressed doubt that it was, in fact, written by a White House official:

Does the so-called “Senior Administration Official” really exist, or is it just the Failing New York Times with another phony source? If the GUTLESS anonymous person does indeed exist, the Times must, for National Security purposes, turn him/her over to government at once!

Earlier that afternoon, he issued a one-word Tweet apparently questioning whether the article constitutes “treason”:

The fallout from the event has already been considerable. Democratic Party Senator Elizabeth Warren, for instance, has called for the invocation of the US Constitution’s 25th Amendment. This provides a mechanism for removing a president deemed unfit for office due to illness – including mental illness. Republican Senator Rand Paul, for his part, suggested subjecting White House officials to lie detector tests.

Over twenty officials have already publicly denied being the author. And, naturally, there has also already been fierce speculation about the identity of the culprit.

Corrupted to the core

Whoever it is, Trump is clearly incensed and surely will spare no resource in trying to root out what he appears to see as treachery. Whether or not he succeeds is now all but irrelevant. The article reveals how the entire US system of government has become corrupted to its core. Progressives must now redouble their efforts to realize Bernie Sanders’ vision of a democratic revolution that defeats Trumpism and provides a genuine alternative to his far-right agenda.

– For information on truly progressive candidates in the US, see Our Revolution and Justice Democrats. If you’re a US resident, you can also join and participate in the activities of the Democratic Socialists of America.