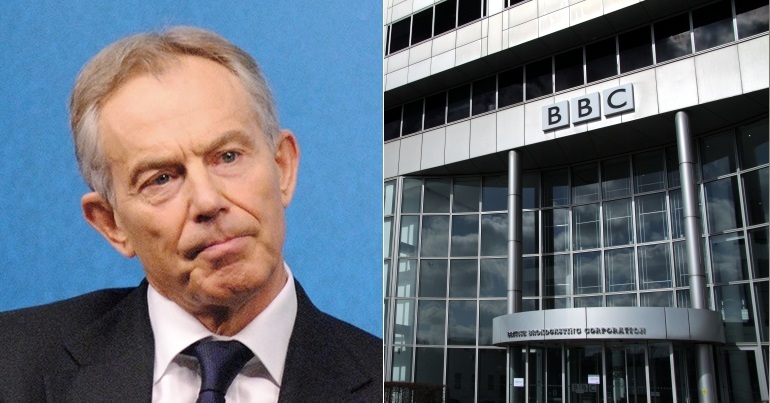 Yesterday could have been a good day, except I woke up to alleged war criminal Tony Blair being interviewed on BBC Radio 4.

My initial reaction was one of rage. Only a day earlier, this man was reported to have accepted millions from Saudi tyrants and shaken hands with an Italian fascist. And now a state-funded platform was giving him air-time. To add insult to injury, presenter Nick Robinson failed to hold Blair to account in any way for his policy decisions and affiliations. Instead, he quietly heard Blair out on everything, including his undermining of the democratically elected Labour party leader.

It might not be possible to take back control of the Labour Party Tony Blair tells me in first of a new season of my Political Thinking podcasts ? Download here… https://t.co/CvnQV03kvP Listen on iTunes: https://t.co/clySpQhhRo / pic.twitter.com/iFkJBZmFLY

In the interview, when discussing Labour’s shift to the left, Blair asked: “Can it be taken back?”. As if Labour belonged only to centrists, and not to its members who have a right to guide its direction. Centrists seem to behave as though they have some fundamental entitlement to the party. It sounded like Blair was describing someone snatching his toy, not a political party operating in an entirely democratic manner.

But it got worse. Blair went on to say he represents, “a modern, more moderate, progressive politics”. It would appear centrists believe that attaching words like “moderate” will automatically add some inherent value to their politics.

Yet the reality is Labour’s move further and further to the left has only come about because the time for moderation has ended. The country has suffered far too long under Conservative and “moderate” Labour politicians, and what we need now is radical change. A shift to the left is the only remaining option if we truly want to lift the general 99% of the population out of the poverty and misery it currently faces. And the fact that Labour’s shift to the left isn’t moderate is exactly what makes it more progressive than centrist politics could ever be.

But it’s almost as though Blair lives in a centrist bubble where the cognitive dissonance, the sheer refusal to accept that Corbyn’s leadership is the will of Labour’s membership, blocks out reality. Speaking about the next general election, he stated:

I don’t think the British people will tolerate a situation where… the choice of the next election is Boris Johnson or Jeremy Corbyn… I just don’t believe people will find that… an acceptable choice.

Blair’s difficulty in understanding this, as a member of the political elite and someone who has consistently worked only to serve his own and his friends’ political interests, is unsurprising. But a political movement for the many, as represented by Corbyn, is gaining support from the many, whether Blair and his ilk like it or not. Labour membership has increased exponentially since Corbyn was elected party leader in 2015. As Fréa Lockley, writing for The Canary, points out:

When I heard that Owen Jones would be on the programme later, I hoped my morning would improve. It didn’t.

Introduced only in the last five minutes of the programme, Jones talked about Blair’s support of dictators, saying:

It’s interesting that he is more critical of his own party leadership than the murdering dictatorships that he advises.

Yet Robinson chose to disregard Jones’s remarks entirely. He argued instead that we need to hear out voices critical of the current Labour Party. It is indeed incredible that the fervour with which the likes of Nick Robinson defend Blair’s credibility is so absent when it comes to the current Labour leader. Anyone would think that it wasn’t really about credentials, but about the politics of these white middle class journalists.

When Robinson accused Jones of “attacking” Blair, Jones was quick to mention that his criticism is based on Blair’s politics. He said Blair is “ideologically opposed” to policies such as taxing the rich, scrapping tuition fees and public ownership:

[Blair] is wedded to a politics that is firmly rooted on the right.

Giving all of (maybe) three minutes of airtime to a voice critical of Tony Blair was bad enough. But during the course of the discussion, Robinson took it upon himself to interrupt and talk over Jones in a kind of badgering way that is appalling to see in mainstream British media. When Jones criticised Robinson’s “sycophantic” approach to interviewing Blair, the dismissal in Robinson’s voice was clearly audible.

In many ways, this particular Today programme summarises the problem with the BBC. The establishment, particularly voices on the centre and right, are heard out with respect. The left is squeezed in as a formality and dismissed out of hand.

This show is the perfect example of why campaigns such as #BBCSwitchOff and #ChangeTheMedia succeeded in gaining so much momentum. As a result, for my own wellbeing, I plan on switching off from BBC Radio 4 for the foreseeable future.

– Read our other articles on BBC bias.