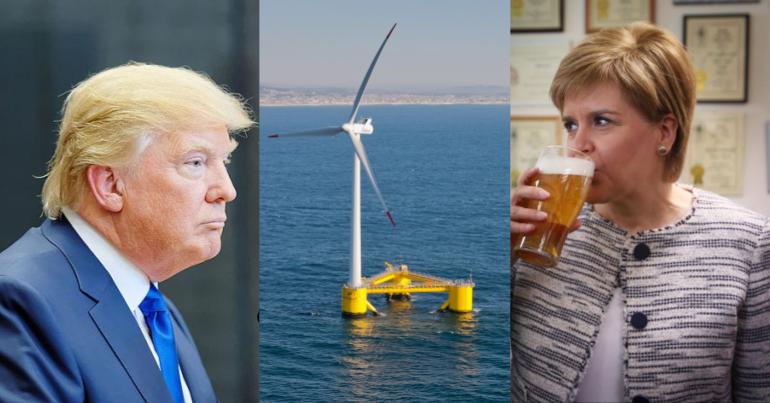 The development faced strong opposition from Donald Trump, who owns a golf course in the area. The US president lost his final legal challenge against the windfarm at the Supreme Court in 2015.

Environmental groups celebrated the opening of the European Offshore Wind Deployment Centre (EOWDC). Campaigners in Scotland said wind energy has a “critical” role in the fight against climate change.

The feud between Trump and the Scottish Government over the Aberdeen Bay windfarm is long running.

As the billionaire president prepared to visit Scotland earlier this year, Sturgeon made some thinly veiled jibes in his direction, boasting of how the government beat ” that American golf course owner” in court.

Trump had mounted a series of bids against the development. These included a now infamous session at the Scottish Parliament in 2012. When asked for information as to why windfarms would damage the Scottish tourism industry, the now US president replied, “I am the evidence”.

According to a press release seen by The Canary, the new 11 turbine facility in Aberdeen Bay has the capacity to supply 70% of the city’s household energy demand. Developers have said the site will prevent 130,000 tonnes of CO2 entering the atmosphere every year. That’s the equivalent of removing 736,817 cars from UK roads over its lifetime.

Two of the turbines have a capacity of 8.8 megawatts; making them the most powerful in the world.

Speaking at the opening, the first minister also claimed the windfarm showed the true potential of renewable energy. The SNP leader said:

I am proud that as part of this ground-breaking project, the world’s most powerful offshore wind turbines are now up and running in Scotland.

“Keeping the lights on”

It’s brilliant to see Aberdeen Bay windfarm officially opened. Climate change is being played out before our eyes, with this summer being officially named the hottest in UK recorded history.

Offshore wind has a critical part to play in the fight against climate change by helping reduce emissions, keeping the lights on and creating thousands of jobs across the country.