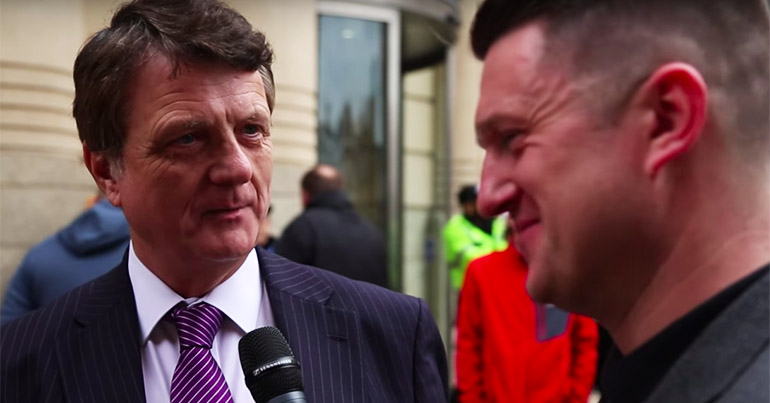 There’s currently a war raging for the soul of UKIP. And if the extreme Islamophobic wing of the party gets its way, far-right ‘activist’ Steven Yaxley-Lennon, aka Tommy Robinson, could become a card-carrying member.

While internal divisions have muddied the waters around UKIP’s position on his recruitment, a senior official recently called for Yaxley-Lennon to join the original Brexit party. And now, UKIP’s leader, Gerard Batten, has backed his proposed membership.

Whether or not this will happen is unclear. But one thing’s for sure: it looks like some higher-ups in the party are trying to refashion UKIP into a National Front (NF) for the 21st century. And it could lead to blood on the streets.

On September 6, UKIP’s family and children spokesperson Alan Craig announced that he had submitted a motion for UKIP’s National Executive Committee (NEC) to debate bringing Yaxley-Lennon into the fold:

He’s now a Kipper at heart and we should welcome him.

His claims about Yaxley Lennon are questionable. But if Craig’s wishes are fulfilled, the NEC will allow the motion to be debated at the party conference on 21 September. And if it passes, the far-right firebrand could be a member of the party by the end of the year.

But on the same day that Craig made his statement, a senior UKIP spokesperson informed right-wing blog Guido Fawkes that the NEC would not consider Yaxley-Lennon’s initiation.

According to Guido’s source, the motion would be against the party’s constitution. UKIP currently bars former members of far-right organisations from joining so they’d need to call an extraordinary general meeting to rule in favour of the plan.

Apparently “nothing has been added to the NEC agenda on Sunday”, with the spokesperson reportedly calling Craig’s claims “sensationalist fake news”.

This led to a certain amount of confusion in the press over the reliability of Craig’s statement.

So on 7 September, Craig wrote his own article for the Kipper hitting out at the unnamed spokesperson. He said that he had discussed the issue with UKIP party chairman Tony McIntyre, who told him that the NEC would debate the motion.

Craig signed off by stressing that his interview was not “fake news”, but “accurate, factual and right”.

UKIP’s flip-flop on Yaxley-Lennon’s potential membership appears to come from a split over strategic approaches within the party.

Since Batten became leader in February 2018, UKIP has swung even further to the right. In fact, he’s given the party a complete PR makeover, taking them from the ageing world of fringe Brexitism into the youthful realm of ‘free speech warriors’.

To boost this image, he has enlisted several of the UK’s most prominent hard-right ideologues: Infowars’ Paul Joseph Watson, YouTube ‘alt-righters’ Sargon of Akkad and Count Dankula, and former Breitbart ‘darling’ Milo Yiannopoulos.

The initiation of the ‘free-speech’ crowd into UKIP has coincided with Batten’s out-and-out support for “truth teller” Yaxley-Lennon.

The UKIP leader has met with the English Defence League (EDL) founder regularly. He’s defended him publicly and compared his struggle to that of “the suffragettes, Nelson Mandela, and Mahatma Gandhi”.

And now he explicitly wants him in the party:

Because, for all his faults – and I’m sure he will admit he has got them – and his indiscretions, he is incredibly brave…

And my view is that in his case we should make an exception – a one off.

For political analysts from the right to the left, the ‘free speech’ that Batten and Yaxley-Lennon claim to support is little more than thinly veiled racism. Even more, ‘moderate’ party members think that Batten is playing with fire. They want him to focus on Theresa May’s failed Chequers Brexit deal instead of courting the ultra-right.

Farage’s allies might assume that courting far-right former convicts will make UKIP loose electoral legitimacy. But so far, it seems that Batten has proved the former leader wrong.

After UKIP flopped in the 2017 General Election, Batten led a mass revival of the party. Membership has increased by 15% since the beginning of the year and recent polls have put UKIP at 7%, one point above the Liberal Democrats.

Labour Gains a Four Point Lead Over the Conservatives as UKIP Support Picks Up. (Changes vs 7th July)

And while the polls are unsteady, there’s nothing to say that the EDL founder’s presence in the party wouldn’t increase that number in the long run.

Yaxley Lennon is deeply unpopular with the wider public. But his following has exploded since his arrest and brief imprisonment while on a suspended sentence for allegedly undermining an on-going trial into a suspected grooming gang. His current YouTube channel boasts just under 250,000 subscribers. His Facebook page had over 830,000 followers in May and the number continues to rise.

His latest prison stretch, in fact, secured his position as an ‘oppressed martyr’ in the eyes of the far-right; a claim that mainstream media outlets, including the BBC, have essentially lent credence to.

And his supporters are on the march.

A National Front for the 21st century

During the #FreeTommy protests, the UK witnessed some of its largest far-right street rallies since the 1970s, drawing an estimated 15,000 people. Yaxley-Lennon’s supporters threw up Nazi salutes, shouting chants reminiscent of the British Union of Fascists (BUF).

But today the far-right’s scapegoats of choice are Muslims. “Muslims off our streets” and “I’d rather be a Nazi than a Muslim” chants are becoming commonplace in the UK.

'Muslims off our streets' chanted by Tommy Robinson supporters

Today supporters of racist Tommy Robinson marched through Leeds chanting "Keep Muslims of our streets". One of our activists reports:“Seeing 350 men marching in Leeds today armed with racist chants in defence of Tommy Robinson was worrying. I was in a high street shop when I heard chants coming from down the street. Once they got closer I could make out what they were saying: "Keep Muslims off our streets". Stephen Yaxley – Lennon (Robinson's real name) says that he is not racist but it is racists and Islamophobic men rushing to support him. After they marched down the high street, they broke police lines in order to continue on outside the court in which Tommy Robinson was arrested, putting the ongoing trial in jeopardy.Robinson wants people to forget that he led the EDL, the racist street movement that saw an increase in racist attacks, that terrorised muslim communities and that would happily see my Turkish born father who has lived here for over 20 years sent back. The DFLA is a dangerous street movement and if they are allowed to grow, we will see an increase in racist attacks and we will see the racist murders that dominated the days of the BNP and the EDL.”Join us to oppose them:• Tomorrow, Sat 2 June: Stop the DFLA in Manchester on 2 June• Sat 9 June: Oppose far right march for Tommy Robinson

Posted by Student Stand Up To Racism on Friday, 1 June 2018

#VIDEO | Fans of jailed anti-Muslim terrorist Tommy Robinson chant anti Muslim & Nazi slogans, and declare, "Better to be a Nazi than a Muslim."

And the tactics of far-right political organisations such as BUF and the NF have also been mirrored in terms of the renewed street violence.

Three members of UKIP recently trashed a socialist bookshop (they were later expelled from the party). When hundreds of Yaxley-Lennon’s supporters marched through London in June, far-right activists attacked a senior trade union leader as he was sitting with his wife outside a pub. And this is against a backdrop of skyrocketing hate crime figures following the referendum and with a further increase in numbers expected post-Brexit.

Trade Unionist, Steve Hedley, from the RMT was attacked by Tommy Robinson supporters while having a drink at a pub after he and his fellow trade unionists attended the counter-demo to the Pro-Tommy event.pic.twitter.com/ET1sJNpMW7

Whether or not he claims them, Yaxley-Lennon has become the figurehead of a dangerous far-right street army. And the Islamophobic tropes that he is spreading have allegedly led to murder.

On 19 June 2017, Darren Osborne ploughed a van into a crowd outside London’s Finsbury Park mosque in April, killing one man and injuring 12.

Police later reported that it had taken “less than a month” watching material created by the likes of Britain First and Yaxley-Lennon to radicalise him. Prior to the attack, Osborne read an email notification from Yaxley-Lennon’s former website The Rebel. It stated that a “nation within a nation was forming just beneath the surface of the UK. It is a nation built on hatred, on violence and on Islam”. Later, after driving from Wales to London, Osborne asked a passersby for directions to the “big mosque“.

In February 2018, BBC Newsnight gave Yaxley-Lennon space to rebut the claims he had influenced Osborne. The EDL founder claimed innocence. But he later described the event as a “revenge attack”, taking aim at the mosque for “creating terrorists and radical jihadists and promoting hate and segregation”.

Three months later, Batten is saying he wants to recruit him.

After decades of centrism, British politics has become fully polarised. Critics have accused prominent Tories including Jacob Rees-Mogg and Boris Johnson of pulling the Conservatives ever further to the right, forcing UKIP to find a new purpose. And now that Batten and his ilk are actively courting Yaxley-Lennon and his ultra-right supporters, UKIP is fast becoming the 21st century’s answer to the National Front.

If UKIP breaks its constitution to allow Yaxley-Lennon to join, by the same rule there’s nothing to say that other former members of ultra-right organisations like the British National Party, Britain First, and the EDL couldn’t join in the future. While Batten has said Tommy’s case would be a “one off”, and the blanket ban would remain in place, UKIP would set a precedent.

On top of this, Batten’s UKIP is slated to work directly with Steve Bannon (also a staunch fan of Yaxley Lennon) and his new far-right European project ‘The Movement’. That means major financing and an international network. If the EDL founder does join, his ultra-right fans could provide UKIP with a violent street army to boot.

The spectre of fascism

The main barriers to such an outcome appear to be UKIP’s constitution and Nigel Farage along with his more-guarded allies in the party. But even Farage appears to have changed his tune, recently describing Yaxley-Lennon as “brave but unwise”. And now Tommy Robinson has said that he would join UKIP if given the opportunity.

As all eyes are on Labour infighting, a violent street movement could find a political party to call home. And before long, bickering over definitions of antisemitism won’t be our problem. It will be fully funded, well organised, street fighting fascism.

– Read David Renton’s analysis piece Know Your Enemy to learn more about the links between Yaxley-Lennon, other UK groups, and how they connect to an international far-right movement.