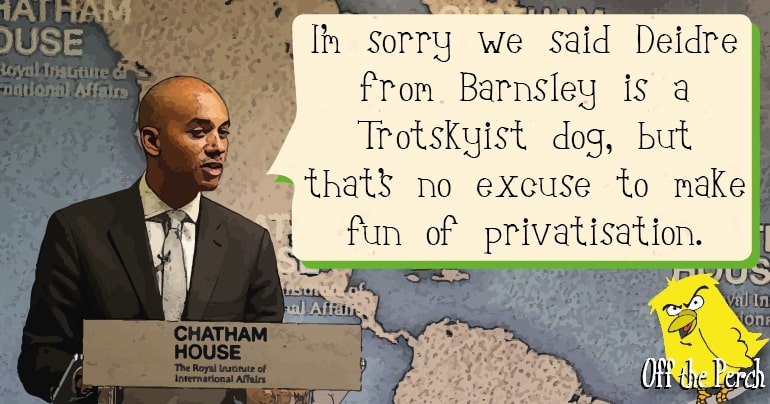 After openly declaring war on the membership in 2015, Labour right-wingers are finally raising the white flag. Speaking before a packed audience of five people, Chuka Umunna said:

It’s over. There’s only so many times you can be told you don’t have a solution to the crisis of capitalism before you begin to suspect that just calling people ‘trash’ isn’t cutting it.

The dissenters in the Labour Party are very good at ‘crybully’ tactics. This involves:

They like to keep politics on this level, because the alternative is to discuss policy ideas, and THEY DON’T HAVE ANY.

Although the crybully tactics did prevent any focus on their lack of policies, they never actually worked. In fact, one analyst found that every time someone like Chris Leslie referred to an ordinary person as a ‘hard-left, Trotskyist infiltrator’, thousands of people googled ‘communism’. What they found was:

The pleading is coming now because the proposed new centrist party looks dead in the water. It’s also looking like the deselection of MPs is a real possibility. Politicians shouldn’t be worried about deselection, though. Unless they’ve spent the last few years slandering the ordinary members who’ll have the power to deselect them. Those MPs should be very worried indeed.