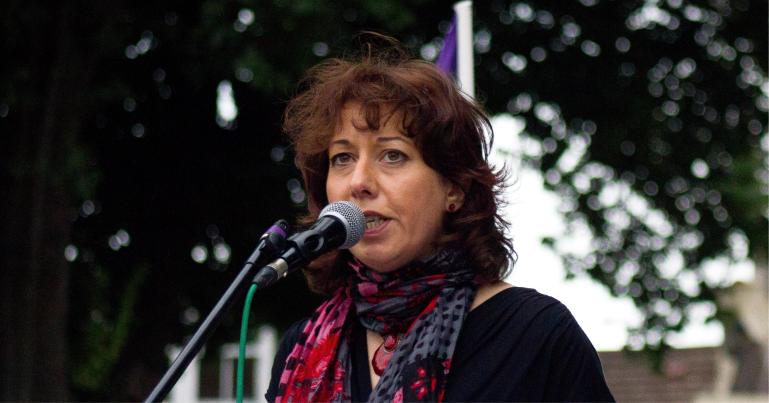 The 2017 Labour Party manifesto made a number of commitments on shaking up the UK’s democracy. The party pledged to reduce the voting age to 16 and make some reforms to the House of Lords. Labour also campaigned on a platform of launching a Constitutional Convention to review our democratic processes.

But some people are arguing that these proposed reforms wouldn’t go far enough to repair the UK’s democracy. Among them is Nancy Platts, Jeremy Corbyn’s former trade union advisor. She’s now heading up a new campaign group – Politics for the Many – which is advocating for a root and branch review of democracy in the UK. Politics for the Many is calling for the Labour Party to commit to “fix the broken political model”.

Platts spoke to The Canary about democratic reform, the Labour Party and the campaign she leads for an “overhaul of Westminster”, ahead of its campaign meeting at the TUC Congress.

The conversation started by looking at the current problems with democracy in the UK and the ways Politics for the Many is seeking to solve them. Platts explained that there are many problems with our democratic structures in the UK, beyond just the voting system:

I think there’s a lot of aspects to this. It’s not just about PR. This campaign is broader than that. It’s looking at the whole political system which we think is broken.

So it’s looking at House of Lords reform, or getting rid of the House of Lords altogether and having a completely new second chamber, rather than even reforming what we’ve got. It’s to do something new.

It’s looking at things like votes at sixteen, under-represented groups in Westminster, in parliament. Things like, you know, the impact of Individual Electoral Registration, the impact of mandatory voter ID systems.

Because what we’re doing is saying, well actually there’s lots of things broken about our political system. And we should look at this in the round, because there’s a lot here to be discussing and talking about.

The long list of problems with democracy in the UK has led to Platts’ view that they cannot be tackled in isolation, and the whole system needs changing. She demonstrated this when saying:

We don’t just want to deal with it piecemeal. We don’t think this will solve the problem.

What is clear from talking to Platts is that she doesn’t see political reform simply as a way to make people’s voices heard. Instead, reforming the UK’s democracy is about improving people’s lives materially. Discussing why she thinks political reform is vital, Platts told The Canary:

It’s very much about people at the very grassroots of politics, the people that are most affected, either by having precarious working lives, or by their wages having been kept down for such a long time now under austerity.

And the only way to address that is to have a different political system.

And for Platts, this means remodelling our political system to reduce the barriers for electing a progressive government. In particular, she argues that the current voting system has prevented Labour from taking power:

So people that think the first past the post system is the right thing for Labour only need to look at the last three General Elections, where we haven’t won.

And actually, you know, start to say: if we want to have a stronger voice, then a different electoral system is needed otherwise we’re now seeing the gerrymandering of the boundaries in order to take away Labour seats. So it’s making it harder and harder for Labour to get over the line under first past the post.

This stems from her belief in the Labour Party’s ability to improve the lives of working people when in government:

Overcoming barriers in the labour movement

But the labour movement has never been united over widespread political reform. Major trade unions including Unite and GMB campaigned against reform to the voting system in the 2011 referendum on the Alternative Vote. GMB also continues to have policy that supports the first past the post voting system, and opposes proportional representation.

Challenged about the barriers to political reform within the labour movement, Platts told The Canary:

Well, I think the first thing to note is that we now have more MPs, more Labour MPs in favour of electoral reform than we’ve had before. I think there’s around 80 or more now that are in favour of electoral reform, so there is a growing trend towards that. I think we’ve now got a Labour Party membership that have seen that actually first past the post is often not working for us.

The pressure has got to come from trade union members. So the way that trade unions are going to get policy change is by the pressure coming from members putting forward motions saying we want to discuss this, we want to talk about it, we want to see change happen. It is up to the members in the union movement to influence their own policy.

My sense is that people are open to discussion at senior levels of the trade union movement.

The Politics for the Many campaign is looking to grow their influence in the near future. That will start with reaching out to trade unionists and Labour members. Politics for the Many are hosting a fringe meeting at the TUC Congress and at The World Transformed (TWT). The TWT meeting will be addressed by influential figures in the Labour Party including Paul Mason and John Trickett.

With this new campaign formed, Labour could join the growing number of voices calling for radical changes to our democracy. That could see the way the UK is run change from top to bottom.

– Come to the Politics for the Many fringe at TUC Congress.