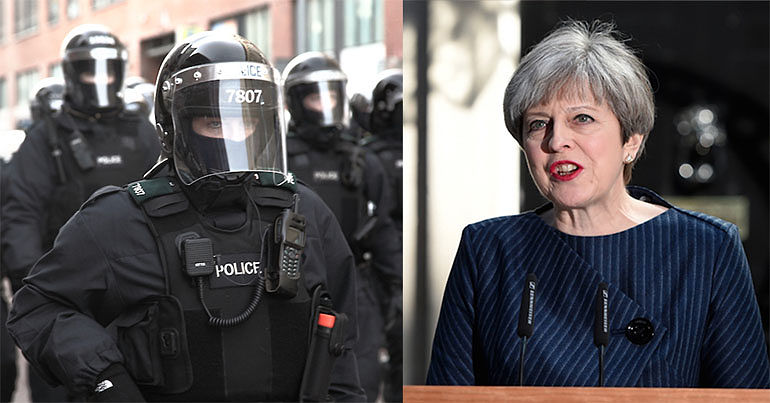 Interviews and leaked documents from security personnel highlight the potentially dangerous outcomes of Theresa May’s Brexit strategy. But so far the only response has been a tantrum from a former senior member of her cabinet.

This latest news makes grim reading for the UK and shows May has little grasp on a credible Brexit strategy.

In a leaked document, the National Police Co-ordination Centre (NPoCC), expressed the fear that a ‘no deal’ Brexit could lead to civil disorder.

The NPCC believe this would happen if the UK faced shortages of medicine and an increase in the price of goods. Police would deal with such disorder by calling on military assistance and cancelling police leave. Shadow police minister Louise Haigh MP responded by tweeting:

Thanks to 8 years of austerity, the police are not resilient enough to deal with the current challenges of violent crime, CSE, modern slavery, terrorism, cybercrime to name a few.

There is no way they can withstand the consequences of a no-deal.

Further division within the Tories

Boris Johnson’s latest tantrum railed against May’s Brexit plans and described her strategy as putting the UK constitution into a “suicide vest”. Johnson’s outburst drew criticism from fellow Conservatives. This was echoed in responses on social media:

For Boris to say that the PM’s view is like that of a suicide bomber is too much. This marks one of the most disgusting moments in modern British politics. I’m sorry, but this is the political end of Boris Johnson. If it isn’t now, I will make sure it is later. #neverfittogovern https://t.co/rdI0FWQhbi

What’s substance in today’s Brexit row? @BorisJohnson say Northern Ireland backstop – agreed 9 months ago when he was For Sec – undermines Britain’s negotiating position. His alternative ? Rip up the promise. His plan? Yet to be produced (tho’ standby for speech by @DavidDavisMP)

Nick : BREXITERS don't have a plan. They cannot agree amongst themselves a plan that will stand up to scrutiny for 5 minutes. We need to Stop this crazy Brexit process.

Others feared an even worse Brexit outcome with May at the helm.

It looks like the only 'plan' @theresa_may has for next March is: pic.twitter.com/7RKqb9XHX8

Return to conflict in Northern Ireland?

And police warnings didn’t end with disorder over price increases. In an interview with the Sunday Times, Northern Ireland Police chief George Hamilton warned of the “grave impact of Brexit on the peace and security of Northern Ireland”. Hamilton continued:

There’s a feeling that as regards the Troubles and the conflict, Northern Ireland is sorted and we don’t need to worry about it, when actually we’re working flat out 24/7 to keep a lid on it.

Hamilton said that the PSNI has asked for extra resources to deal with a post-Brexit security threat. But its not received an answer.

Hamilton believes the government doesn’t fully understand the potential consequences of Brexit in Northern Ireland. Nor does he believe that it’s of great concern to them. He said:

I have a concern some may see issues to do with the Irish border as literally peripheral, not just geographically but in terms of impact.

Social media users agreed with Hamilton’s assessment and said how dangerous it is to ignore him:

Politicians are playing with fire in Northern Ireland

This latest round of Brexit chaos shows, yet again, a divided Tory party and the precipice to which it has brought the UK. It also shows the delicate peace in Northern Ireland counts for little in its Brexit strategy.

In addition to the division within her own party, May has lost the confidence of the British people. So as social unrest and security threats are real fears, the people need a meaningful say on any final Brexit agreement.

– Support the campaign for a People’s Vote.