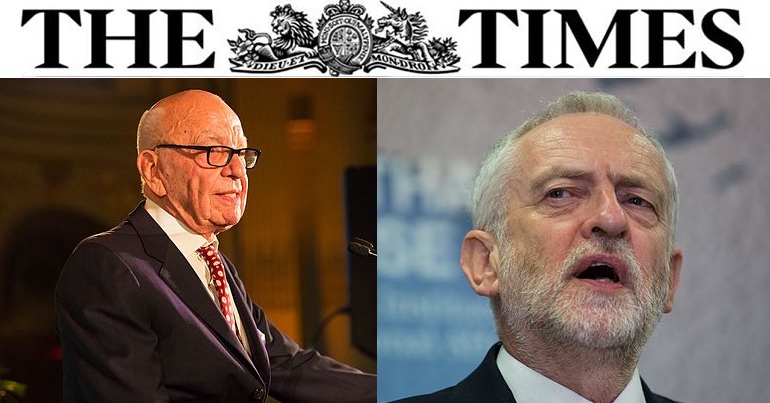 On 6 September, Rupert Murdoch’s the Times published a cartoon about Jeremy Corbyn and his chief strategist Seumas Milne. It gave them Russian names and accused the pair of “spreading poison around Britain”:

My cartoon Thursday @TheTimes…..#Novichok not the only poison being spread around Britain. #LabourAntisemitism #Corbyn pic.twitter.com/e4Lo9l4G8P

Of course, there are numerous problems with this ‘humorous’ take on the poisoning of people in Britain. But the biggest issue is that the Times‘ cartoonist, Peter Brookes, didn’t include Murdoch himself in the picture. Arguably, Murdoch’s the man who’s toxified Britain more than anyone else over the last few decades.

Theresa May named two Russians as suspects in the Salisbury poisoning on 5 September. She also accused the Russian government of ‘approving’ the Novichok attack. Russia denies it was involved. So, Brookes thought this might be a jolly good time to have a bit of fun with poisoning and take a swipe at Corbyn and Milne in the process.

The cartoonist drew a picture of a copper holding up a picture of “Jeremy Korbynski” and “Seumasov Milne”, wearing badges for Hamas and against Israel, respectively. The police officer’s speech bubble states:

These two men are suspected of spreading poison around Britain…

Clearly, Brookes was trying to take aim at the recent controversy over Labour’s antisemitism code of conduct. Well, that and the fact that the British media are fond of depicting Corbyn as some kind of Russian stooge.

But there’s a massive elephant in the room where this cartoon from the Times is concerned. Because the owner of that very publication is the biggest ‘poisoner’ of them all. Murdoch’s rags regularly spread islamophobic and anti-immigrant bile around the country. And the Sun spouted “blatant lies” about survivors of the Hillsborough disaster. Lest we forget, Murdoch’s now-buried News of the World also hacked a murdered schoolgirl’s phone.

Murdoch’s ‘poison’ is wide-reaching too because his media company, News Corp UK, is vast.

As of 2016, the company controlled a 35.13% share of the UK news market. He also currently owns Sky News. Meanwhile, the mogul’s influence over British politicians is equally toxic. News Corp executives, including Murdoch, meet with top figures in the UK government more regularly than other publications. This is not new, ex-prime minister Tony Blair also had a close relationship with the media baron.

A healthy media outlet has an adversarial relationship with the government and an agreeable one with the public. It is, after all, the latter that the media is meant to inform and serve. The Murdoch empire’s behaviour is the inverse of this. That’s toxic for our society.

So, by all means, let’s talk about poisoning in Britain. But let’s take aim at who’s really spreading it.