Confused negotiator demands opponents tell her what she wants - Canary 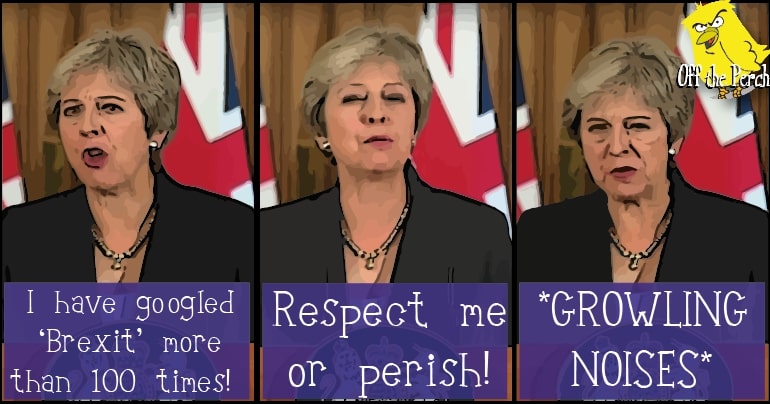 After two long years of “Brexit means Brexit”, Theresa May has had to present her plan to the EU. As said plan was already known to be unworkable, it was ridiculed. In response, May demanded the EU come up with something better.

There were several highlights to May’s speech, including:

We will not accept a hard border in Ireland! We also won’t accept losing all the benefits of having no border! You’ve had two years to invent magic and reconcile these demands; where’s my unicorn!?

I’ve worked 48 hours a day on Brexit for two years, and you have the gall to tell me my plan reads like ‘the incoherent scribblings of a feverish gibbon’!?

This statement was somewhat undermined by the fact she’d just returned from an eight-week holiday. It was also pointed out that most of the work she’s done on Brexit involved sitting beneath her desk and rocking back and forth.

No one told me this plan wouldn’t work! I mean – people kept saying I was a ‘no-nothing clown with an arse-headed strategy’ – but people are always saying that! How am I supposed to know when to listen!?

At several points in the speech, May demanded:

You must show me respect! Do you know how much courage it takes to get up every day and systematically humiliate yourself like this!? I’m the most hard-working laughing-stock in the world!

No one could argue with this. Not that she deserved respect, as obviously she doesn’t. Just that she’s weirdly committed to disgracing herself.

The speech ended with May saying:

If you won’t accept this plan we’ve spent two years cobbling together, then you must invest time and resources proposing something better! Something that satisfies all of our conflicting demands! Something that – if anything – gives us a better deal than before!

May then held both fists up and growled:

The tabloids, which are run by the most idiotic people in Britain, went wild: