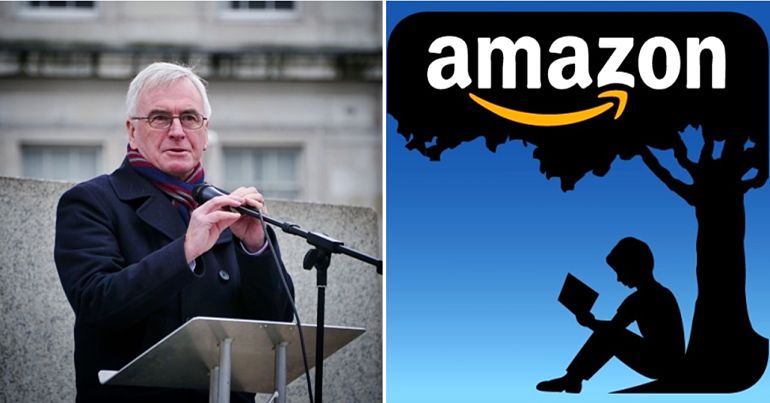 John McDonnell announced that a Labour government would not award public sector contracts to companies such as Amazon who avoid tax. McDonnell said:

We would do whatever it takes to make sure that companies like Amazon pay their fair share of tax.

And research into the tech giant reveals just how well it has done from working with public sector bodies in the UK. Yet the GMB union claims that, despite these contracts, Amazon pays very little tax and has little regard for employee health and safety.

will not give public sector contracts to tax avoiders, full stop.

McDonnell went on to say:

What they have done is use every device not to pay their way.

According to research conducted by data provider Tussell for the GMB, Amazon has been awarded almost 40 public sector contracts since 2015. The largest contract was awarded by the Yorkshire Purchasing Organisation’s (YPO) Digital Marketplace Platform. The research says this contract is worth up to £400m.

Two separate contracts with HMRC are said to be worth £25m. Two more with the Home Office are worth £10.3m.

The GMB’s research revealed that while Amazon received £11m for “web hosting services” from HMRC in 2018, the tech giant paid just £1.7m tax on profits of £72m. Amazon declared these profits through its UK Services subsidiary in 2017.

Amazon are taking us for mugs. They must [be] quite literally laughing all the way to the bank – they’re making profit from a government that they refuse to pay their fair share of taxes to.

An Amazon spokesperson told The Canary:

Government departments using AWS [Amazon Web Services] are not only enjoying cost saving of up to 60% but also supporting a vast ecosystem of smaller companies, across the UK, that offer products and services that complement and help customers take full advantage of AWS. Public sector organisations in the UK use the UK branch of AWS Europe which registers its sales in the UK and pays all applicable taxes, due on its profits, directly to HMRC. Amazon recognises that its status as a supplier to the public sector is a privilege which has to continually be re-earned through the quality of our services and the value for money that we bring for UK taxpayers. We know they will only remain customers for as long as we are able to deliver on both of those things.

GMB also has concerns about staff safety at Amazon. After conducting a freedom of information request, the union discovered:

115 ambulances were called out to an Amazon warehouse at Rugeley in Staffordshire over a three year period.

This compares to 8 call-outs made to a nearby Tesco warehouse of similar size. GMB organised protests “in anger at the appalling working conditions in the retail giant’s warehouses”.

In response, a spokesperson for Amazon told The Canary:

According to Health & Safety Executive figures we have over 40% fewer injuries on average than other transportation and warehousing companies in the UK. Using absolute ambulance numbers to suggest that a workplace is not safe is misleading because it does not take into consideration population size, hours worked, and whether the requests were work-related or not.

The shadow chancellor said a Labour government “will not give public sector contracts to tax avoiders, full stop”. And he threatened that if Amazon doesn’t pay its “fair share” it could lose these public sector deals.