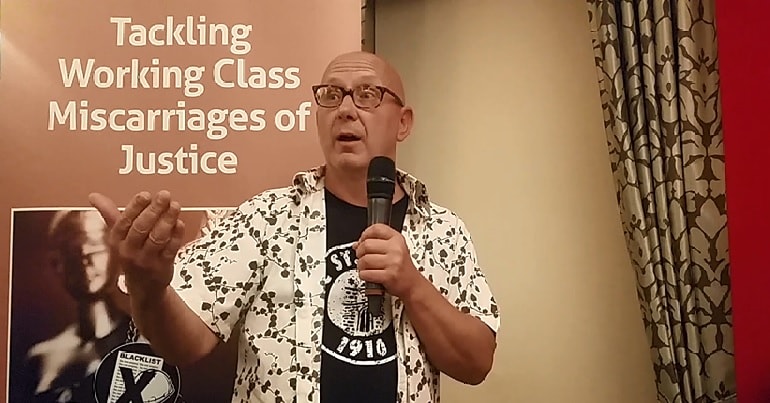 The police and national security state are not “politically neutral” and those who are supportive of Jeremy Corbyn’s platform will not be able to depend on their support. That was the message from a compelling event during the Labour Party conference called Tackling Working Class Miscarriages of Justice.

A packed audience at The Grand Hotel listened to speaker after speaker detail how policing authorities, across the UK and over the decades, have infiltrated, spied upon, and sabotaged left-wing and organised working-class movements.

Significantly, the fringe event – which The Canary attended alongside several other organisations and campaigns – was openly supported by UNITE, the UK’s largest union.

There is an anti-democratic part of the secret state that is there against us.

Smith explained that it’s now proven that the Metropolitan Police were directly conspiring with property developers in order to help blacklist construction workers who joined unions or raised health and safety concerns. This included infiltrating union groups. Workers went for years, even decades, without being able to obtain proper work but never knowing why. The result? Families broke down, marriages failed, alcoholism rose, and some people even committed suicide.

Lois Austin of the Campaign Opposing Police Surveillance (COPS) reminded everyone that Peter Francis, the undercover-police-officer-turned-whistleblower, revealed in 2013 that:

Instead of hunting for the [racist] murderers [of Stephen Lawrence], the police were spending special public resources spying on [the Stephen Lawrence] family and on anti-racist campaigners in the community.

Victims of political policing set up COPS following the 2013 revelations. Pressure from organisations like COPS has since resulted in the revelation that the UK’s political secret police have spied upon more than 1,000 groups since 1968. Austin emphasised how police tactics included undercover political police using the “names of dead children” and “entering into romantic sexual relationships” at times lasting “many years”.

Austin noted that “in one case at least, an undercover policeman fathered children”, which she called an “unmanageable crime carried out by the state”. As more names are revealed by the Undercover Policing Inquiry, more women are coming out to say they were deceived into relationships by undercover police, she said.

Kye Gbangbola, meanwhile, explained how his son Zane died in February 2014 as a result of hydrogen cyanide entering their family home in Surrey. He was seven years old.

The floods of five and a half years ago are “believed to have gathered toxins from a secret landfill”, Gbangbola told the room. “Porton Down [Defence Science and Technology Laboratory] had twelve agents flown in,” he said. The Daily Mail reported that “experts from Porton Down sealed off the property for weeks and 17 neighbours were sent for blood tests”.

This could have happened to any one of us. Because 80% of the people in the country live within two kilometres of a landfill. This is not just a local tragedy. It is also a national issue, because many of us have homes that flood.

Gbangbola, who is now wheelchair-bound, said that his diagnosis is “paraplegia due to hydrogen cyanide poisoning”. But instead of the state offering security and support to his family, they obstructed attempts to obtain truth at the inquest. 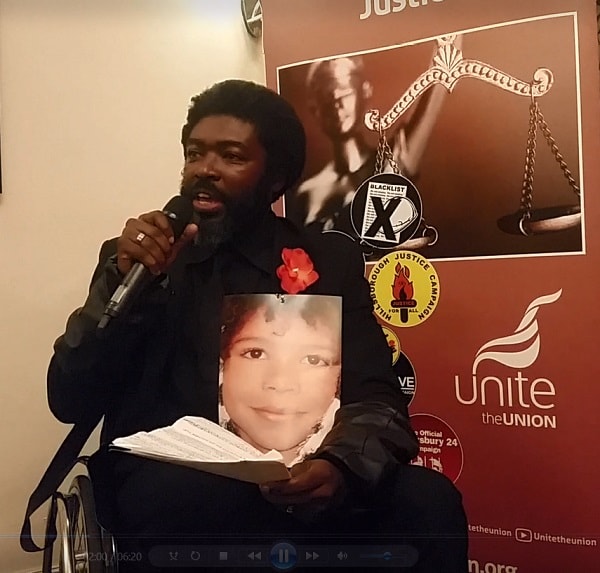 Evidence by the Fire Brigades Union (FBU) members who “detected the hydrogen cyanide”, for example, was “marginalised” by the state, Kye said.

The family is supported by many unions, including the FBU, TUC, Unite, Unison, PCS, as well as by the Labour Party and Green Party.

Resistance to the corporate state must continue

Other speakers included Christine Peace of Orgreave Truth and Justice Campaign, Sheila Coleman of the Hillsborough Justice Campaign, and Eileen Turnbull of the Shrewsbury 24 Campaign. The theme, as Smith pointed out, was one of active collaboration on the part of the police (and the wider state) with big business, to spy upon, infiltrate, and sabotage any perceived threat to the corporate state. It’s not about individual members of the police or the national security state.

Smith told The Canary that policing institutions are by their nature designed to protect and defend the establishment, which in the UK is a capitalist establishment. The sooner there’s wider public acceptance over that fact, he said, the better.

In the meantime, the organising, resistance, and campaigns for truth and justice continue.