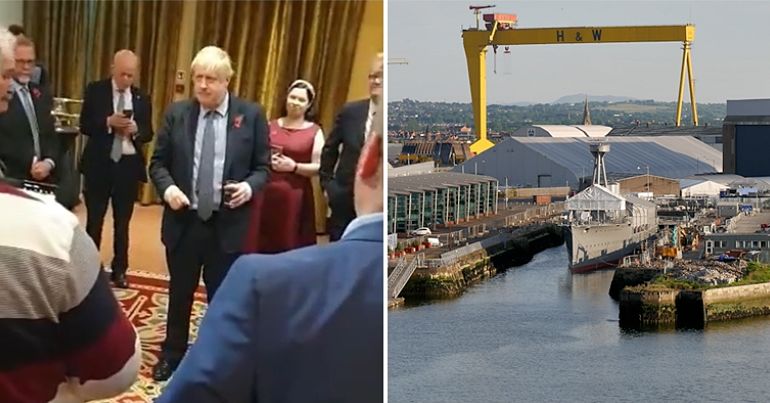 In November 2019, while addressing business people in the north of Ireland before the general election, Boris Johnson swore when the UK came out of the EU customs union that:

So, people seeing empty shelves in supermarkets and businesses experiencing problems importing goods from Britain must be wondering what happened to that promise. The UK left the EU at the start of this year. And as we’ve gone from transition period to ‘period of grace’, things could get even worse.

So what’s causing the problems?

Put simply, the north of Ireland remains aligned to EU customs rules for goods while Britain does not.

And despite Johnson’s bluster, a trade border between the north of Ireland and the rest of the UK came into force on 1 January this year as the Brexit transition ended.

They said it would never happen

In October 2018, as the DUP propped up Theresa May’s government, its leader Arlene Foster said:

There cannot be a border down the Irish sea

She said such a border was a ‘red line’ issue. In fact, she said:

The red line is blood red

While disputed, it’s alleged the Ulster Covenant opposing Home Rule for Ireland in 1912 was signed in blood. The island of Ireland also has a relatively recent history of bloody conflict. So Foster’s words struck a chord.

Then even as recent as August 2020, Boris Johnson, who describes himself as a “passionate unionist”, stated categorically:

There will be no border down the Irish Sea – over my dead body.

Some say businesses were unprepared for the end of the Brexit transition. But hauliers claim people working for customs don’t have the experience to guide them. The managing director of a haulage firm in the north of Ireland told the BBC:

So how did we get here?

Analysts put the blame at the door of Boris Johnson.

Because after coming to power in 2019, he initially proposed an all-island regulatory zone on the island of Ireland covering goods and agri-food. This would keep the north in the EU’s single market for agriculture, food and manufactured goods. The North’s Assembly would vote on this arrangement every four years, which the DUP could effectively veto. So the DUP was on board.

But fearing such a veto, the EU and Irish government opposed it, as it would effectively mean a customs border in Ireland. Then, at Johnson’s meeting with Irish premier Leo Varadkar in October 2019, it’s believed that Johnson accepted a deal with the EU that meant putting a border down the Irish Sea.

That decision, coupled with the lack of government guidance and preparedness for the current scenario, has created chaos. But the UK government seems to be dismissing these issues as “teething problems”.

As a result of Johnson’s chaos, the north is facing staff layoffs, as well as higher prices and less choice for consumers. And matters may get worse. Because when the current grace period ends on 1 April, EU food safety procedures come fully into force. For example, the EU requires that processed meat be certified as it views it as high risk. Supermarkets have already warned that the system will not work without a proper solution.

And even online retail is under threat. Because parcel deliveries with a value of over £135 need a declaration, and there are new procedures for sending alcohol.

As Johnson made that November 2019 speech to a small group of people in the north of Ireland, he may well have thought it would go unnoticed. But as people in the north see the real-life consequences of his reckless actions they won’t be shy about reminding him.