A police officer has been convicted of the manslaughter of Dalian Atkinson – as the ex-Premier League star’s family criticised the “completely unacceptable” five-year delay in bringing his killer to justice.

West Mercia Police Pc Benjamin Monk was slammed by relatives of the former Aston Villa, Sheffield Wednesday, and Ipswich Town striker, who said they had been “sickened to hear” the 43-year-old try to minimise his use of a Taser and two kicks to his victim’s head.

It is believed to be the first time in modern British criminal justice history a UK police officer has been found guilty of the manslaughter of a Black man, according to Inquest, which supports the bereaved following state-related deaths.

According to the charity, no police officer has been found guilty of murder or manslaughter over a death in custody or following police contact in England and Wales since 1986.

A six-week trial at Birmingham Crown Court was told Monk fired a Taser three times – including a single 33-second discharge – and left two bootlace prints on Atkinson’s forehead near his father’s home in Meadow Close, Telford, Shropshire, on August 15 2016.

Jurors took 18 hours and 48 minutes to reach unanimous verdicts on Monk, who prosecutors said had exaggerated the threat posed by Atkinson and lied about the events to justify excessive and unlawful force.

The family’s lawyer, Kate Maynard of Hickman and Rose solicitors, said: “This is the first manslaughter conviction in the modern era of a police officer using excessive force in the course of duty.

“This is a landmark conviction. I hope it is a watershed moment for accountability of police officers in this country.

“While the wheels of justice have, in this case, turned far too slowly, today’s guilty verdict must mark a turning point for the IOPC [police watchdog] and Crown Prosecution Service.” 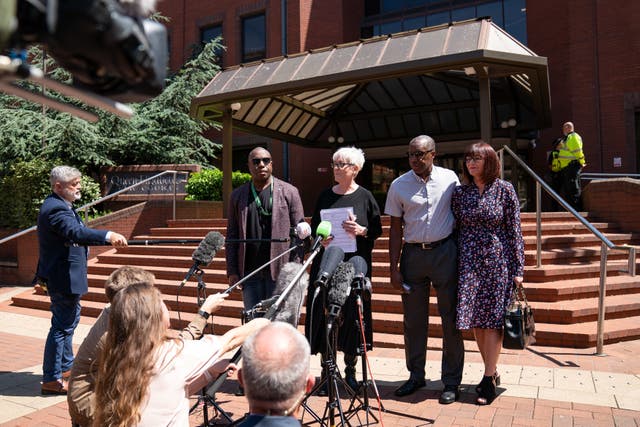 Legal representatives for the Atkinson family read a statement alongside Kenroy Atkinson, brother of Dalian, and his wife Julie (R), outside Birmingham Crown Court. West Mercia Police constable Benjamin Monk was found guilty of the manslaughter of ex-footballer Dalian Atkinson but cleared of his murder. Picture date: Wednesday June 23, 2021.

In a statement following Monk’s conviction, Atkinson’s family said he was “much missed by all”.

The statement added: “We knew years ago about the terrible injuries inflicted by Pc Monk on Dalian, but have been unable to talk about them due to the criminal process. We are hugely relieved that the whole country now knows the truth about how Dalian died.

“While it has been hard for us not to be able to talk about the details of Dalian’s death, it has been even harder to sit through this trial and to hear Pc Monk try to justify the force he used.

“On the night he died, Dalian was vulnerable and unwell and needed medical attention. He instead received violence, and died with Pc Monk’s bootlace prints bruised onto his forehead.”

The family members added: “The fact that this case has taken nearly five years to get to trial is completely unacceptable, especially when you consider that Pc Monk’s identity was known to the prosecuting authorities from day one.”

The family also said the 48-year-old’s footballing talent “led him to achieve great things in his life”.

They said: “Our sincere hope is that now that the truth about his death is known, and justice has been done, we can start to remember him not for the manner in which he died, but for the way in which he lived.”