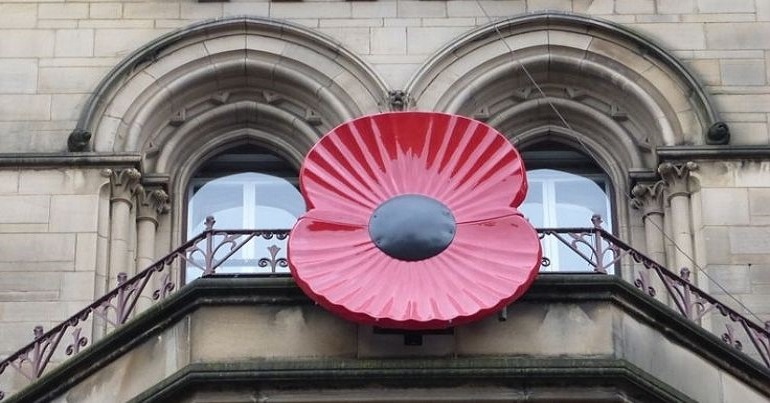 Poppy Mania is back. And the Remembrance 2021 entries are no less eye-catching (or deranged) than in previous years. We’ve got poppy ghost weddings, nationalist knitting and commemorative caravans.

So come this way to the Armistice House of Horrors!

“Could there be a more loving way of saying: We wool [sic] remember them?”

Elsewhere, one member of the public spotted what she thought was the actual poppy police van:

Not to be outdone, someone in Brighton ‘poppified’ the tower of the local zipwire. Okay, mate. Yeah. Nice that. Because this is how the over 57,000 casualties at the first day of the Somme saw this going:

Get the mileage in

And in between debates about getting their mates off corruption charges… cough, I mean… rounds of normal parliamentary business, some MPs topped up their patriotism by riding poppy cycles. So here is Esther McVey getting some miles in:

Next on the #IPTPoppyRide is @EstherMcVey1 MP with a total distance of 1.9km in 5 minutes pic.twitter.com/oY6A4N1J6Q

An early contender for bonkers Remembrance display of the year must go to the poppy ghost wedding spotted at a Sainsbury’s somewhere.

Because nothing says ‘respect the troops’ like seeing a mannequin in an American uniform marrying his weird headless spectral bride. And who wouldn’t want to see this as you pop into Sainsbury’s for a packet of Hobnobs and some Rizla?:

Popped in for a pint of milk and ended up at a ghost wedding for are troops x pic.twitter.com/he1gZQTeau

Not to be beaten, supermarket rival Tesco appeared to have created a human/poppy hybrid as part of their bid to recruit drivers. Because nothing says I love the troops like a nostalgist triffid-looking thing:

Tesco in Portsmouth is recruiting drivers. Must have responsible attitude, clean driving license, and giant Poppy instead of a head. pic.twitter.com/aloOhSKfoV

And a special mention must go to whoever spent this much time and money covering their camper vans in stickers of poppies, ghostly soldiers and Halifax bombers. Points for effort, if not exactly style:

It will reassure everyone to know that Remembrance continues to be the incredibly serious and sombre occasion it was meant to be. And that has not been remotely derailed by poppy-signalling nationalism. Because that would be weird. Yeah. See you all next year.