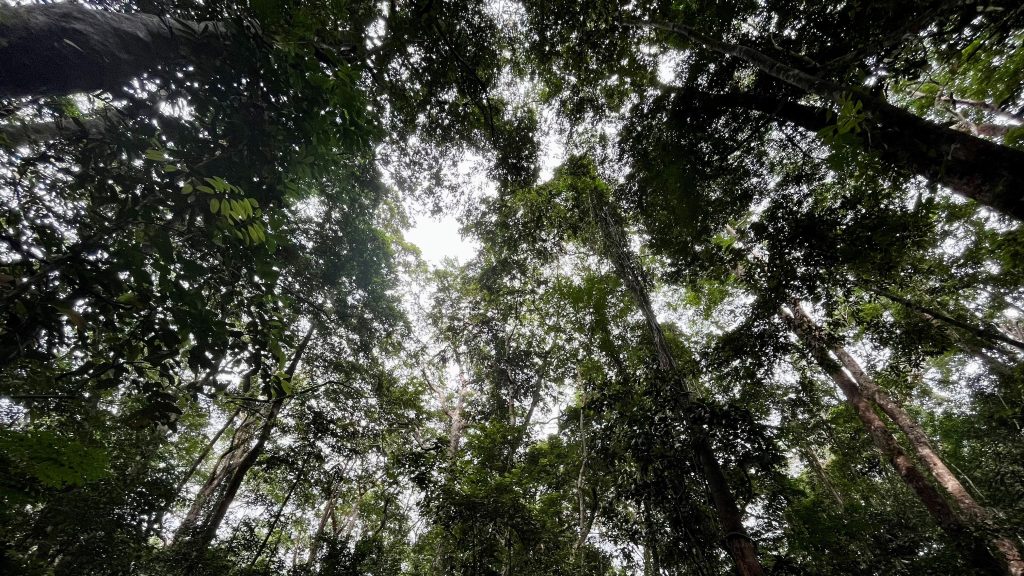 Failing to conserve the carbon-rich forests of the Congo Basin would mean the world loses the fight against climate change, officials in Gabon have warned.

The central African country’s sustainable forestry and rainforest conservation are storing carbon, helping wildlife and providing jobs – and should be supported as part of global efforts to address the climate and nature crises, they urge.

The call comes after countries at the Cop26 summit in Glasgow made renewed commitments to reverse deforestation, and ahead of the “Nature Cop” in China later this year to agree a deal to protect the world’s wildlife.

Gabon is part of the Congo Basin, with 88% of its land covered by tropical forests that are home to wildlife including critically endangered western gorillas and forest elephants and endangered chimpanzees.

Coastal mangroves absorb carbon emissions and provide nurseries for young fish and crocodiles, and there are nesting sites for leatherback turtles on the country’s beaches, though the coasts are also affected by plastic waste.

Out to sea – as well as offshore rigs for the oil that provide 60% of Gabon’s economy – humpback whales can be seen.

Gabon’s Minister of Forests, Oceans, Environment and Climate Change Lee White said he would like to see countries such as the UK encourage companies to invest in sustainable development of forestry and fisheries in the country.

And payments that support Gabon’s efforts to maintain the carbon absorption of its forests can help the world in its efforts to cut emissions to net zero.

There are countries creating carbon, and with our mangroves and forests we absorb the carbon. We would like to be paid for it.

Under the rules, loggers can only take two trees per hectare every 25 years and nature is left to regenerate.

This allows the forest to capture more carbon than an unlogged forest, because the more open canopy lets light in and stimulates the growth of the remaining trees, Prof White said:

In terms of climate change you can log the forest and still increase your carbon stock so you can save the forest by exploiting it.

Government space agency Ageos uses satellites and drones to monitor and flag up illegal logging and forestry concessions that are breaching the laws.

Gabon is also trying to shift from an extractive economy in which raw materials such as logged trees are directly exported, keeping only 8% of the value of the timber and associated jobs in the country.

The export of unprocessed logs was banned more than a decade ago and efforts have been made to encourage international companies to invest in processing factories in-country, including by establishing a free-trade zone.

The vast, sprawling Nkok site outside the capital Libreville includes factories to create veneers, plywood and furniture from Gabon’s versatile Okoume tree and other species, as well as activated charcoal made from wood waste products.

Factories on the site are expanding so fast, some even say they are struggling to get the logs they need for their operations.

But creating a sustainable forestry industry with processing in-country can multiply the value of the sector and the jobs created by 10 times or more.

In that way, we make the forest more precious. If the forest is precious and valuable to the Gabonese, then there’s much more chance we will nurture the forest than if it has no value.

Preserving the forest is important not just for Gabon but for the world, he warns:

We know today that we are on the edge of a climate crisis if we are not already in it.

Climate change and the loss of natural services provided by the Congo Basin rainforest, such as rainfall to the Sahel region of Africa and for the Nile, could destabilise the continent and create hundreds of millions of refugees.

Those refugees could come into countries such as Gabon, cutting down forest to grow crops, creating a vicious cycle for the climate, or head to Europe, he warned.

As the climate fight intensifies, the country is looking mostly at sustainable forestry to replace oil to provide revenue – and create new jobs for its young population – but ecotourism can also play a smaller role, Prof White said.

They include Loango on the coast, where tourists can see gorillas in a scheme that supports a research project, as well as forest elephants and other wildlife, and go sport fishing, providing jobs and income for local people.

Gabon’s protected areas, created to conserve valuable nature that could be affected by activities such as forestry, mean the “carbon credits” the country is now looking to sell internationally for the pollution the forests absorb are “highly biodiversity positive”, Prof White argues.

And he suggested there could be bilateral deals where countries could pay to offset their ongoing emissions using the net 100 million tonnes a year of carbon Gabon absorbs with its forests.

I would much rather a country like the UK was not giving (aid) money but used their investment portfolio to encourage companies with the right mentality to come and invest in sustainable development in Gabon, in sustainable fisheries and ecosystems.