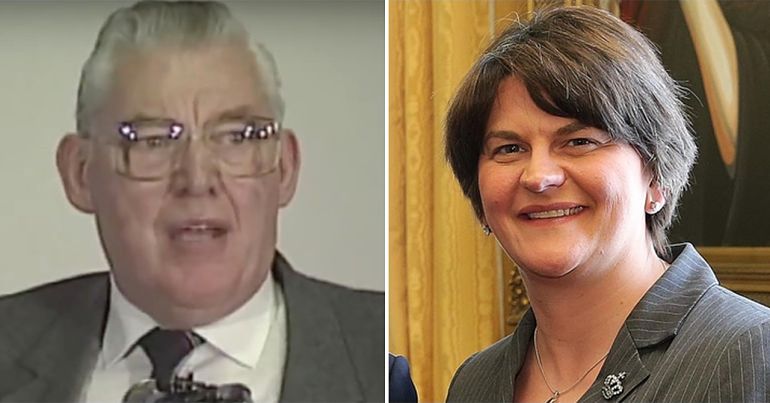 Open Doors launched its 2019 World Watch List on 16 January. Open Doors is a member of the Evangelical Alliance and supports persecuted Christians around the world. The list ranks the countries where Christians suffer persecution.

The DUP’s Arlene Foster and Nigel Dodds attended the launch, along with other members of Parliament, to show its support. But it’s hypocrisy in the extreme for the DUP to support this event. Because Catholic Christians have suffered greatly in Ireland and the DUP leadership bears some responsibility.

The organisation began after “a young Dutchman”, Brother Andrew, went on a journey to Warsaw in 1955. There he “discovered the existence of a persecuted church”.

Warsaw was behind the iron curtain. The iron curtain separated communist from non-communist countries in Europe between 1945 and 1989. According to Open Doors, Christians behind it were:

Persecuted for their faith [and] they feared they had been forgotten by their fellow Christians around the world.

But Brother Andrew’s journey didn’t take him to Ireland. That journey would have revealed another “persecuted church”. A Catholic Church persecuted by British loyalism, the police and members of the Protestant faith. The same faith as Brother Andrew.

And the DUP shoulders some of the blame for this. Speaking about Catholics following attacks on their homes in 1968, former DUP leader Dr Ian Paisley said:

The following year he roared:

Catholics protested against anti-Catholic “endemic discrimination” in October 1968. Groups like the People’s Democracy formed to end this and included members of all faiths and political backgrounds. Protests ended in violence as the police and loyalists attacked them. Yet members of the DUP described People’s Democracy protests as a “coat trailing exercise”, meaning they were deliberately provocative.

Loyalists in Ballymena attacked and harassed Catholics going to mass in Harryville church in 1996. Loyalist protests outside this church continued until the Good Friday Agreement in 1998. Then, in 2001, Protestant residents in north Belfast hurled missiles at Catholic girls on their way to primary school.

Meanwhile, member of the “Protestant fraternity” Orange Order Tom Elliott, faced expulsion from the order for attending the funeral of a Catholic policeman in 2011.

The persecution felt by Catholics was so great that two notable members of that Church spoke out. In 2005 former Irish president Mary McAleese said of Hitler’s dictatorship:

Then later that year Father Alec Reid, who acted as a peace broker between the IRA and Irish and British governments, made a similar comparison. There was such controversy at these comparisons that both apologised.

Time to own up

Of course, all suffering warrants attention. But people often forget that Catholics suffered in Ireland. And there was little outcry from the rest of the Christian community when it happened.

The DUP needs to take some responsibility for Catholic persecution as some of it came from its community. Real progress in Ireland is unlikely without it.

– Find out more about the Pat Finucane Centre and its quest to get justice for the families of the victims of British state killing. It advocates a non-violent resolution of the conflict in Ireland.