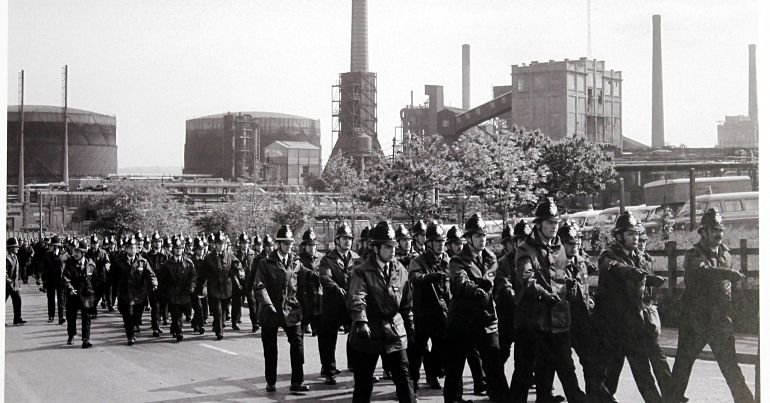 Conservative Party leadership contenders Boris Johnson and Jeremy Hunt are still determined to consider no-deal Brexit as an option. Should no-deal proceed, we shouldn’t forget that earlier this year the government announced that thousands of riot police and troops are prepared to intervene if needed.

And as with Margaret Thatcher’s response to the 1984-85 miners’ strike, it will be the workers who will be hit the hardest – economically and physically.

Johnson’s determined to leave the EU “Come what may”. He argues that in the event of a no-deal Brexit, the Article 24 trade law would enable the UK and the EU to have zero taxes on trade as a temporary measure. But that solution has been vigorously contested and is likely unworkable.

Hunt has also made it clear he will support a no-deal Brexit if necessary, even if that means businesses go bust. Indeed, it’s already estimated that more than 200,000 jobs have been lost because of Brexit.

To take car manufacturing as an example, one study predicts that UK vehicle production will be halved by 2020 if no deal proceeds. The Society of Motor Manufacturers and Traders believes that:

a ‘no deal’ Brexit would have a devastating impact on the [vehicle manufacturing] sector and the hundreds of thousands of jobs it supports… We believe that a ‘no-deal’ should be taken off the table for good to end damaging uncertainty that has undermined investor confidence and forced companies to spend millions on ‘no deal’ contingency planning.

Armed military support to help maintain law and order is legally allowed under “military aid to the civil power” provisions. In March, the Ministry of Defence announced that under the auspices of ‘Operation Redfold’ around 3,500 military personnel would be readied for deployment in the event of a no-deal Brexit. The plan also includes the deployment of several hundred reservists.

The operation will be run by the Defence Crisis Management Centre, headquartered in a nuclear-proof bunker, known as Pindar, in Whitehall. The bunker would also be used in a conventional war.

More than 10,000 riot police are also prepared to intervene in riots and other disturbances and ready for “worst-case scenarios”.

We have met with the Ministry of Defence to discuss the potential roles it could play to provide support for policing.

Of those officers earmarked for deployment, 1,000 are trained in the use of armoured vehicles and water cannons. This is an example of classic ‘low-intensity operations’, as advocated by General Sir Frank Kitson, to quell rioting and general unrest.

Appropriate legislation for all this is already in place in the form of the Civil Contingencies Act 2004. This includes the enactment of emergency powers in case of potential disruption to the supply of money, food, water, energy, fuel, communications, and transport.

In addition, the police can request military assistance in civil emergencies via military aid to the civil power (MACP) – “maintaining law, order and public safety under the direction of the police”.

Cabinet secretary and national security adviser Sir Mark Sedwill has argued that if the UK left the EU without a deal then a recession is likely as well as a fall in sterling. According to Sedwill, food costs would rise by 10%. Some stores and supermarkets are already working with police if no deal goes ahead and leads to protests, looting, or rioting. The UK imports two-thirds of its fresh food – mainly from the EU. In July 2018, Whitehall civil servants issued a warning that a no-deal Brexit could see “Armageddon” and empty shelves in supermarkets.

The 2017 study, A Food Brexit: time to get real, warned that the worst affected will be the most vulnerable in society, particularly people who already use food banks. The study added that, according to the British Retail Consortium, food prices will likely rise by 22%. One of the authors, Professor Tim Lang of City University, London said:

A food system which has an estimated three to five days of stocks cannot just walk away from the EU, which provides us with 31 per cent of our food.

The first people to be hit by the consequences of Brexit will be food shoppers.

And UN rapporteur on extreme poverty Philip Alston argues that Brexit may exasperate poverty, not reduce it:

what you are doing is developing a Britain, post the Brexit decision whichever way it goes, which will be a diminished Britain.

The last time that emergency powers were enacted in the UK was in 1973/74, by Conservative prime minister Edward Heath. He went on to impose a three-day week in response to a miners’ strike.

In 2014, it was revealed that prime minister Margaret Thatcher drew up plans to deploy 2,800 troops during the 1984/5 miners strike. However, according to the Skwawkbox, there is anecdotal evidence that troops were used during the strike. Though it was the deployment of police on a massive scale that saw some of the worst confrontations:

These interventions came from the state against workers. They amounted to nothing less than class war. Deployment by Johnson or Hunt during a no-deal Brexit will likely be no different.

It all depends on whether the British people really want to take back control – of their lives and in opposition to those politicians who simply couldn’t give a damn.