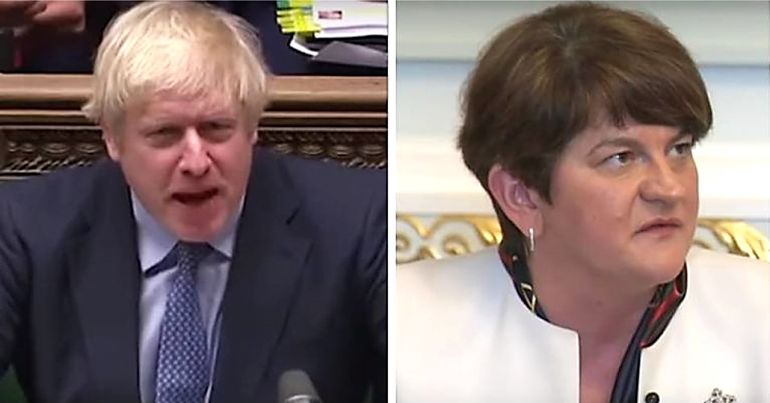 Prior to Leo Varadkar and Boris Johnson’s first meeting in Dublin on 9 September, Varadkar was clear that a ‘breakthrough was unlikely’. And while they didn’t announce anything concrete, some believe Johnson may be softening his position on the notorious ‘backstop’ deal:

The Boris bravado has disappeared in Dublin, saying No Deal would be a “failure of statecraft”.

He is now going all out for Mrs May’s “deal”, with Northern Ireland to be hived off from the rest of the UK.

A clean break Brexit is the only way forward.

As The Canary reported, one of the main obstacles to a Brexit solution is the question of how to avoid a hard border on the island of Ireland. This is complicated by the fact that the current Withdrawal Agreement between the UK and the EU’s 27 other member states includes a backstop agreement.

The backstop is “a legal guarantee to avoid a hard border under all circumstances” after the UK exits the EU on 31 October. But it means the UK could remain in a “single customs territory” for a period of time. This is something which Johnson’s government and its DUP partners strongly oppose.

The DUP has been able to exert such influence on the UK government through its confidence-and-supply arrangement with the Tories. This pact kept Theresa May in power and was set to do likewise for Johnson until he lost his wafer thin majority.

Will the DUP end up in that ditch?

But an apparent rumour of a “Northern Ireland-only backstop” might be a sign that Johnson is prepared to ditch the DUP. And he might ditch them to get a deal before 31 October. After all, as Johnson has lost his parliamentary majority, the support of the DUP is irrelevant.

Hardline Brexiteers absolutely oppose a UK-wide backstop agreement as it keeps the UK in the customs union. But a ‘Northern Ireland-only backstop’ might be a slightly easier pill for them to swallow. And as DUP support now serves little purpose, the consequences of upsetting their friends from the north are minimal.

The DUP has smelled the coffee

Even hardline DUP politicians appear to be waking up to this. While he restated that he felt the backstop is “anti-democratic”, DUP MP Nigel Dodds said:

There may be some areas, where in certain areas of the economy, where it’s to the benefit of Northern Ireland and the rest of the United Kingdom and the Irish republic and the rest of the EU, to have arrangements, but that would have to be subject to the provisions of paragraph 50… which is that the consent of the Northern Ireland assembly – unionists and nationalists – would have to apply. So if all of that applies, then that is fine.

Seasoned political commentators in the north of Ireland picked up on this. They seemed to think it showed a change in the DUP position:

Is @NigelDoddsDUP saying a restored Executive and Assembly would serve as a cat flap for a DUP guard dog in the eventuality of @BorisJohnson falling into temptation? pic.twitter.com/fjBI9H5FT6

Nigel Dodds just told Newsnight an NI-only backstop is acceptable with Stormont input. So there you go.

Nothing concrete, but it’s movement

While the utterances from Johnson in Dublin and the DUP on Newsnight aren’t definitive signs of change, they are signs of movement.

Prior to the Irish and British PMs meeting in Dublin, Varadkar indicated that a deal could be done at the EU summit on 17-18 October. Johnson may have little choice now but as he indicated in Dublin, he does want some kind of deal. So while nothing is certain, the Tories and the DUP may just have got a dose of reality over these last few days.