Despite the buzz around his speech, there's little talk of the bombshell John McDonnell dropped - Canary 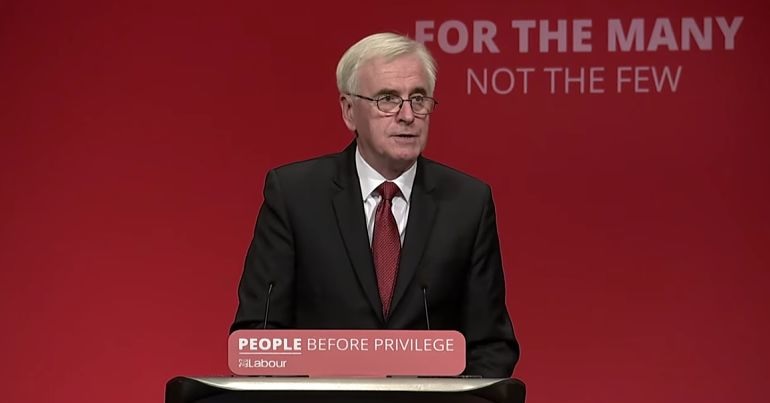 There’s lots of buzz around the new policies John McDonnell set out at the Labour conference. But one of the trailblazing ideas he announced didn’t get much attention, even though it could have a transformative effect on Britain and, indeed, the wider world.

During his speech at Labour conference, McDonnell announced the launch of a document on ‘Universal Basic Services’ (UBS). As the shadow chancellor explained:

It lays out our belief that everyone has a right to a good life, that the state has a responsibility to make good on that right by providing public services free at the point of use. These services are part of our shared experiences – experiences that are too important to be left to the market, whether a family can afford them or not or whether they receive them or not.

As socialists, let’s be clear… we believe that people have the right to education, health, a home, and a decent environment; and yes, access to culture and leisure.

In a nutshell, UBS is a system whereby people’s ‘basic’ needs are met through public provision. In the UK, the NHS is the most obvious example of this: a health service free at the point of use. So is our education system, up to 18 years of age. But within UBS, there are a number of aspects of our lives that could fall under the ‘basic’ umbrella. Reports have explored [p11] UBS which includes food, shelter, transport and information.

In 2017, the Institute for Global Prosperity and University College London released a report on UBS. In it, they identified one key benefit of introducing the system:

If we are to increase cohesion, the sense that we are “all in it together”, we must act where we can have the greatest impact and that is on the cost of basic living… Basic services will reduce poverty because they will reduce the cost of a minimum living standard. Even if income levels remain static, it will make accessible a life that includes participation, builds belonging and common purpose and potentially strengthens the cohesion of society as a whole.

Labour echoed this in its document on UBS, saying:

there is an urgent need to reassert the role of the state in guaranteeing a universal safety net and to re-establish collectivism and solidarity as the principles that bind our society together and guarantee a good life for all.

Division is a big problem in Britain. People are divided over Brexit, of course. But they also face divisions based on class, gender, ethnicity, and geography. Clearly, the neoliberal ‘winner takes all’ system is doing nothing to bridge these divides.

But division isn’t the only issue that UBS promises to help with. It could also guarantee a basic standard of living to those whose jobs are lost to automation in the future:

The new report by @UKLabour, “#UniversalBasicServices: The Right to a Good Life” showcases that #UBS could play a huge role in helping society address challenges like #automation and #climatechange.

Arguably the biggest problem faced by the UK, and the rest of the world, is the climate crisis. That’s why millions took to the streets on 20 September to demand radical action from governments. But as Labour points out, UBS could play a role in tackling this crisis too:

There is no doubt now that keeping planetary warming within limits necessary for continued human habitation will require transformational change of an unprecedented scale and pace. Such radical change can only be delivered through collective action and UBS may have a key role to play in delivering the rapid and mass behavioural change needed. For example, universally free public transport could be a socially just, efficient and effective way of ending our car dependency.

As Labour states in its UBS document, the ideas laid out in it aren’t the “final word” on the matter, but a “snapshot” for right now. It’s clear though on what it wants to achieve in the future:

At times people’s imagination has been constricted by the myths and mantras of neoliberalism. A further task of the labour movement and the Labour Party is to widen our own imagination, so that we are able to strive to demand ever higher standards for what counts as a rich and meaningful life

In short, Labour is currently ‘imagining’ a world where we’re secure, united and extending our collaboration to the planet itself. Sounds like a good plan, to say the least.