'How dare you!' We can't ignore Greta Thunberg's powerful and important challenge. - Canary 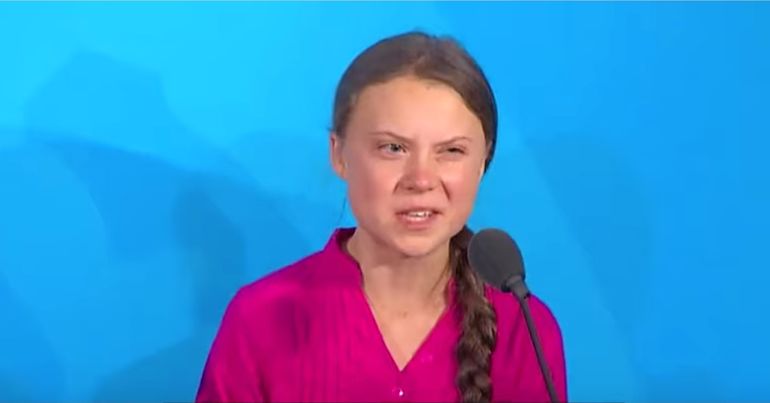 On 23 September, 16-year-old Greta Thunberg addressed world leaders at the UN Climate Action Summit. In just four minutes, she spoke more sense than most adults about the devastating impact of climate breakdown. And her challenge to world leaders, and indeed all adults, is something we can’t ignore.

“This,” said Thunberg, “is all wrong”. And she continued:

I shouldn’t be up here.

I should be back in school on the other side of the ocean. Yet you all come to us young people for hope. How dare you!

You have stolen my dreams and my childhood with your empty words. And yet I’m one of the lucky ones. People are suffering. People are dying. Entire ecosystems are collapsing. We are in the beginning of a mass extinction, and all you can talk about is money and fairy tales of eternal economic growth. How dare you!

Thunberg’s emotions poured into each and every word she spoke. And although the audience clapped and cheered, this is a powerful challenge that urges a meaningful response. Children and young people are currently leading the way in demanding action to prevent climate breakdown. Yet, it’s the adults who have full control of economics and structures of power. And as Thunberg also pointed out, this message isn’t new:

For more than 30 years, the science has been crystal clear. How dare you continue to look away and come here saying that you’re doing enough, when the politics and solutions needed are still nowhere in sight.

“Right here, right now is where we draw the line. The world is waking up. And change is coming, whether you like it or not.”
My full speech in United Nations General Assembly. #howdareyou https://t.co/eKZXDqTAcP

A picture says a thousand words

Footage also emerged on social media showing Thunberg glaring at Donald Trump as he arrived at the UN. It says everything:

This was the moment Swedish teen climate activist, Greta Thunberg, crossed paths with US President, Donald Trump, at the UN’s climate summit. pic.twitter.com/eBVez2MzaV

With one look @GretaThunberg sums up an entire planets reaction when they see @realDonaldTrump #ClimateActionSummit pic.twitter.com/GMZvukryNz

Trump later mocked Thunberg. And many saw his vile sarcasm as bullying:

Donald Trump has been accused of bullying Greta Thunberg with his 'sarcastic' tweet about her speech https://t.co/anq0ek9eLw pic.twitter.com/bBMejeInkQ

Yet in doing so, he demonstrated perfectly just how vital her words truly are.

Her speech gave a concise and damningly accurate summary of the current targets to limit climate catastrophe. But as she stressed:

There will not be any solutions or plans presented in line with these figures here today, because these numbers are too uncomfortable. And you are still not mature enough to tell it like it is.

She also issued a compelling warning to all adults and world leaders:

You are failing us. But the young people are starting to understand your betrayal. The eyes of all future generations are upon you. And if you choose to fail us, I say: we will never forgive you.

We will not let you get away with this. Right here, right now is where we draw the line. The world is waking up. And change is coming, whether you like it or not.

Thunberg is right; one way or another, change is coming. Without action, we stand little chance of survival. Our very future depends on ensuring everyone in any position of power listens to Thunberg and all the young people taking action.