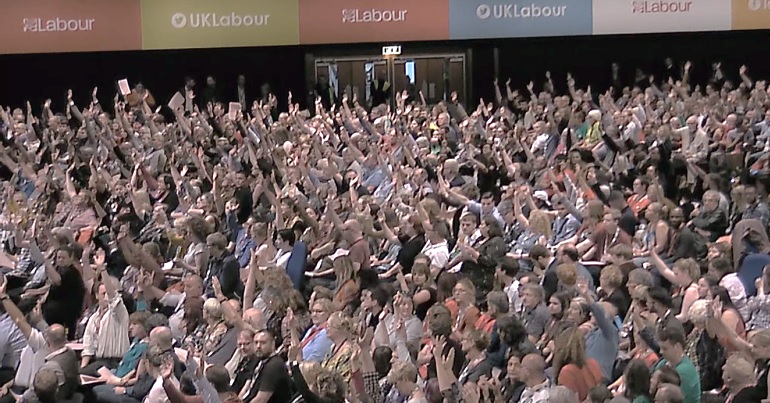 The Canary has been following Labour’s plans for a Green Industrial Revolution closely. But this variation of the Green New Deal has now become official policy at the party’s 2019 conference. And it will reportedly be a “top priority”.

Our Green Industrial Revolution will tackle climate change as a top priority 👇 pic.twitter.com/hS3kasqAUe

In 2008, we introduced the world’s first Climate Change Act.
Today, we will lead a Green Industrial Revolution to protect our planet and invest in all our futures. pic.twitter.com/piJhc5EXx0

Labour leader Jeremy Corbyn has long been on the front line campaigning for strong action against the climate crisis. And he previously stressed that, among other projects, the Green Industrial Revolution “will create around 400,000 jobs, high-skilled, good quality, well paid jobs, all around the country” in environmentally friendly industries. But now, as grassroots campaign group Labour for a Green New Deal said on 24 September:

The Labour Party has today adopted Labour for a Green New Deal’s groundbreaking plan to decarbonise Britain by 2030 with a radical policy package to increase social and economic justice.

Labour for a Green New Deal, which put forward the motion, reported that:

Delegates at the party’s annual gathering in Brighton voted in favour of adopting a Green New Deal with a 2030 decarbonisation target by an overwhelming majority on conference floor on Tuesday afternoon.

Trade unions are at the heart of our movement. A worker-led #GreenNewDeal will rebuild our economy for the many ✊🌹 pic.twitter.com/kcaywitn4b

As it explained, the plan:

commits Labour to aim for net-zero carbon emissions by 2030, nationalisation of the big six energy companies, the guarantee of new good unionised jobs as part of a worker-led just transition, free or affordable integrated green public transport, and support for the Global South and climate refugees.

And it highlighted that:

The vote came as a result of 128 constituency Labour parties (CLPs) electing to send Labour for a Green New Deal’s motion to this year’s party conference – more than for any other issue – which put climate top of the agenda in Brighton.

A Labour government will deliver a prosperous future for the many #GreenNewDeal 🌹https://t.co/XhNvrjqjyq

Addressing doubts in some communities that climate breakdown is a major problem for ordinary working people, trade unionist and Labour for a Green New Deal spokesperson Lauren Townsend stressed:

Environmental breakdown is a class issue which requires working class solutions. The Labour movement has voted to take leadership on the climate emergency with a response which puts people and planet before profit.

For too long, big businesses and corporate polluters have allowed our planet to burn… Only a comprehensive programme of government and worker-led action can bring us out of this climate emergency…

we need democratic public ownership of not just the national grid, but the big energy companies too…

working class people are the crucial agents to tackle climate change. This is a pro-worker agenda – for working class communities and for workers’ jobs…

Indeed, elitist ‘solutions’ have done precious little to deal with the climate crisis. But Labour’s proposal – promising revolutionary change for working communities – is powerful. And it’s precisely the response Britain and the world need right now.