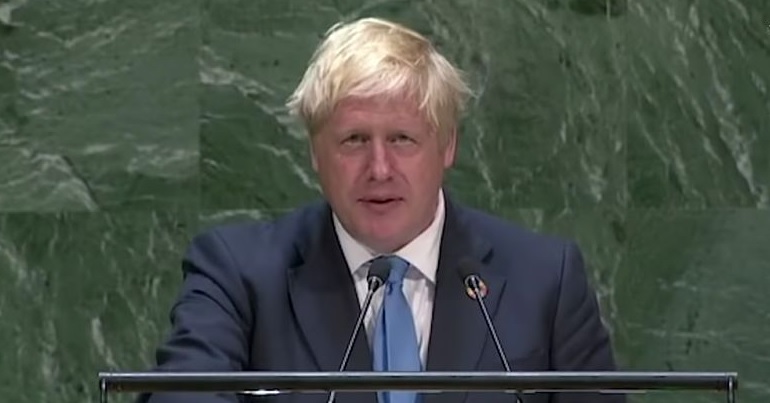 Boris Johnson had a bad day on 24 September, in more ways than one. The UK’s supreme court ruled that his prorogation of parliament was unlawful. The British media can’t get enough of that story. But Johnson had another scandalous moment the same day. And the mainstream press has woefully failed to tackle this disgraceful episode.

Along with other world leaders, Johnson gave a speech at the UN General Assembly on 24 September.

A number of British media outlets reported on it. Here’s a selection of the headlines:

As these headlines suggest, the articles generally focus on the typical eccentricity of Johnson’s speech. What the reporting largely fails to point out though, is the absolute hypocrisy of it.

With the exception of the Brexit / liver comparison, the PM used the “bizarre” examples cited in the British press to highlight the potential advantages and disadvantages of technological advancement. As the international outlet Politico reported, Johnson spoke about the increased “connectivity” between people and objects in their daily lives we may see in the future. Of these advanced objects, he said:

every one of them minutely transcribing your every habit in tiny electronic shorthand, stored not in their chips or their innards … but in some great cloud of data that lours ever more oppressively over the human race, a giant dark thundercloud waiting to burst. And we have no control over how or when the precipitation will take place.

Essentially, Johnson warned his UN counterparts that, due to the data stored about us in an increasingly technological world, people may find themselves with “nowhere to hide”. Describing data as the “crude oil” of the modern economy, he said:

how do we know that the machines have not been insidiously programmed to fool us or even to cheat us?… The same programmes, platforms, could also be designed for real-time censorship of every conversation…

Digital authoritarianism is not, alas, the stuff of dystopian fantasy but of an emerging reality.

Johnson is right on the money, which is why digital rights groups have warned about this danger for ages. But the PM belongs to a party of government that is utilising technology in the very ‘authoritarian’ way he’s warning against.

In 2016, the then Conservative government passed the Investigatory Powers (IP) bill. Johnson was that government’s foreign secretary. The Open Rights Group’s executive director Jim Killock described it as the “most extreme surveillance law ever passed in a democracy”. As The Canary reported at the time:

The IP bill will essentially remove UK citizens’ right to privacy. It will force internet service providers (ISPs) to store a record of our web browsing activity. And a long list of officials will be able to access those records. It also allows our security services to hack devices, and legitimises their own collection of our data in bulk.

It is a bill that codifies George Orwell’s 1984 into law. While you won’t see Big Brother beamed through your television screen like in that book, make no mistake, he will be there. In fact, he’ll be everywhere.

There’s one area of our technological lives that remains hidden from the government, though. That’s our encrypted communications. But now the UK government has come up with a plan to open these up to its prying eyes. Essentially, it’s proposing that tech companies build a ‘key’ for governments into their products that allow our encrypted emails and messages to be opened by states when necessary. Whistleblower Edward Snowden – who revealed the extent of the US and UK surveillance capabilities – says this is “extraordinarily dangerous”. Kind of like that ‘giant dark thundercloud’ Johnson spoke about.

As for the PM’s concern that some could use technology to “fool us”, that might be more convincing if he hadn’t hired Dominic Cummings as his senior adviser. Cummings famously ran the Vote Leave campaign, bombarded voters with prejudicial and misleading adverts, and bragged about his campaign’s use of tech data afterwards:

Essentially Johnson spoke about a very real danger at the UN. But his government is very much a part of that threat. It’s the height of hypocrisy for him to stand there acting like he’s on the right side of the issue. Not that the British media is pointing that out.