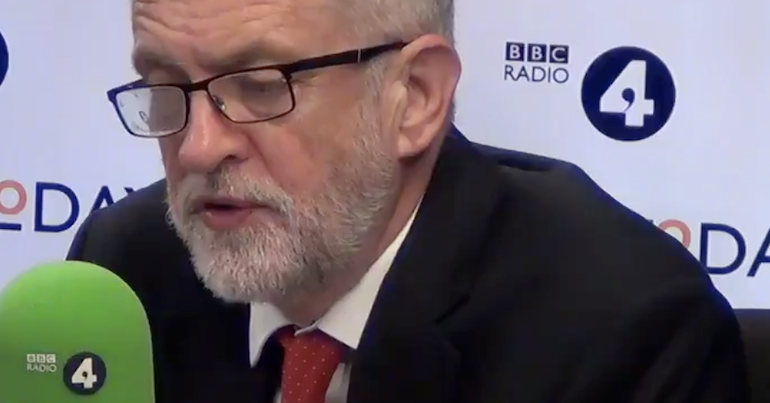 On 25 September, Jeremy Corbyn gave an interview on Radio 4‘s Today show. As well as addressing Labour’s next step to tackle the current political chaos, he gave a powerful reminder that UK politics isn’t all about Brexit.

Corbyn remained calm and composed throughout the interview. But the host didn’t seem to listen to his responses. She asked why a Remain voter in Islington shouldn’t vote for the Liberal Democrats, and Corbyn’s response nailed it. He said:

if they vote Liberal Democrat, they’re voting for a party that brought austerity to this country, and brought the cuts in welfare benefits, and brought the slashing of local government spending… [these voters] care about Brexit, they also care about a lot of other things in their lives.

And as one Twitter user pointed out, this response is “spot on”:

Yes resolving brexit is important. But so is ending austerity, investing in our communities and public services, & rebuilding our country.#VoteLabour pic.twitter.com/a96C8Kcl47

In 2018, Philip Alston – the UN special rapporteur on extreme poverty and human rights –  investigated the impact of austerity and rising levels of poverty in the UK. His report was damning and pinned blame on the Conservative and coalition governments since 2010.

14 million people, a fifth of the population, live in poverty. Four million of these are more than 50% below the poverty line, and 1.5 million are destitute – unable to afford basic essentials. The… Institute for Fiscal Studies predicts a 7% rise in child poverty between 2015 and 2022, and various sources predict child poverty rates of as high as 40%.

And this is what a Corbyn-led Labour is trying to halt and mend.

“The horrible inequalities that exist in Britain”

During the interview, Corbyn clearly laid out the Labour policy to legally block no-deal Brexit before calling a vote of no confidence in Boris Johnson. But the host’s questions failed to acknowledge this. The interview showed, yet again, the relentlessly biased coverage from the establishment media towards Corbyn’s Labour.

Yet as Corbyn astutely pointed out, a general election at least gives Labour equal coverage:

during an election campaign, the broadcasting rules kick in, and we get equal coverage with the other parties which doesn’t always feel like the case between elections.

The host’s response was simply to criticise the opposition and ask why Labour isn’t ahead in the polls. Corbyn replied:

I think we’ve been a very effective opposition. And I think the programme we’re putting forward – of the ending of austerity, of investment in the worst-hit communities across this country, and dealing with the horrible inequalities that exist in Britain – I think that is something that will be very attractive to voters of this country.

"Our priority is to prevent a no deal exit and when that has been achieved… we will then be ready with a motion of no confidence," says @jeremycorbyn #r4Today https://t.co/L23wB5cHNF pic.twitter.com/zAkzBp14CW

Corbyn’s voice is as powerful, informed and clear, as it always has been. And in the midst of the current chaos, it’s vital we don’t forget that.