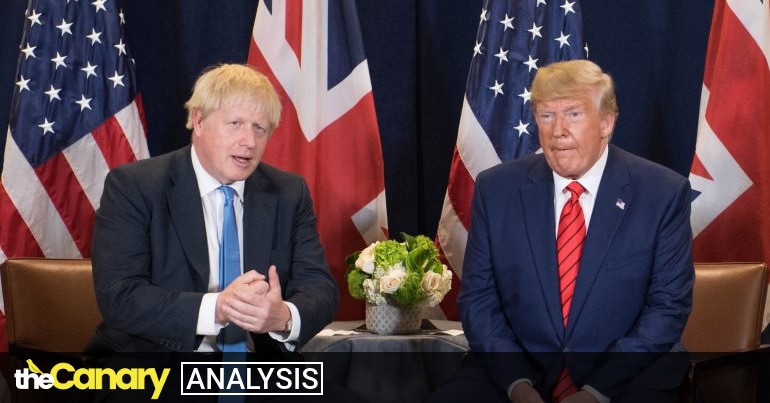 The US and its allies recently accused Iran of being behind the 14 September attacks on the Saudi Arabian oil industry. These hit the world’s largest oil processor and an oil field. Iran, however, has denied responsibility. And critics of Washington’s longstanding military interventionism believe warmongering elites are again trying to lead the imperialist superpower into yet another disastrous Middle East invasion.

An elitist warmongering establishment walking us into another quagmire

The US is consistently the world’s biggest military spender. Saudi Arabia is in fourth place, and the UK in seventh place (though Boris Johnson’s government recently promised a big boost in military spending). Iran, meanwhile, reportedly invests a quarter of what Britain spends.

In recent months, there have been heightened tensions between the West and Iran, following Donald Trump’s 2018 exit from the Iran nuclear deal. This withdrawal essentially killed the agreement. And ever since, the US has sought to put pressure on Iran via brutal sanctions and military threats.

Washington also has a decades-long record of interfering in Iranian politics. One specific act of US terror, for example, was the downing in 1988 of an Iranian commercial flight in the Persian Gulf. This killed 290 civilians (including 66 children). That seems to be roughly 290 more than the number of US civilians that Iran has ever killed. Yet the elitist warmongering establishment in the US is looking for any excuse to invade Iran; and making it look like the main aggressor in the region seems to be a key tactic.

Saudi Arabia, meanwhile, has created the world’s worst humanitarian crisis in Yemen. It’s also a serial human rights abuser and has strong links to terrorism. But it’s a key US ally and arms recipient, so it gets a free pass.

Progressives challenge the march to war

For the reasons above – and more – US progressives are speaking out. Presidential hopeful Tulsi Gabbard, for example, has warned of the disastrous consequences of an attack on Iran while slamming Washington’s role in propping up the Saudi dictatorship:

My brothers and sisters in uniform took an oath to support and defend our Constitution and the American people, not the theocratic dictatorship Saudi Arabia which supports al-Qaeda and spreads the ideology of radical Islamist jihad around the world. #TULSI2020 pic.twitter.com/3tLhGwtFPv

The ratcheting up of retaliatory actions between the US and Iran will lead to a war that will be devastating to the people of both countries. As president I will re-enter the Iran Nuclear Agreement and end the sanctions against Iran to move us back from the precipice of war. pic.twitter.com/3yodm8dzrc

If we go to war with Iran, we will destabilize the entire region and thousands of Americans and Iranians will die.

I am working right now with my Republican colleagues to stop this disastrous rush to war. pic.twitter.com/qJP5i2bNo3

The same people that got us into Iraq are now trying to start a war with Iran. #NoMiddleGround on ending endless wars.

I make no apologies for opposing the war in Vietnam.

I make no apologies for opposing the war in Iraq.

I make no apologies for opposing the war in Yemen.

And I make no apologies for now trying to prevent a war with Iran.#DemDebate2

We should not be defending the Saudi dictatorship

The US may claim that Iran is a state sponsor of terrorism. But Washington’s own list of allies is essentially a who’s who of terrorism. The Saudi dictatorship, for example, has fuelled terrorism and committed numerous acts of terror. As part of its brutal war on Yemen, it has attacked many civilian targets. And as Tulsi Gabbard pointed out recently, it seems to have been “providing direct and indirect support directly to al-Qaeda” in the country.

The Iranian government is no role model for any progressive. But as Noam Chomsky previously pointed out:

In comparison with Saudi Arabia, Iran looks like a civil rights paradise.

And as former US Army colonel Lawrence Wilkerson recently summed up:

Yet it’s Iran the West is targeting. Saudi Arabia, meanwhile, continues to get countless weapons and generous funding from the US. Why? Because as Trump himself has spelled out very clearly, the Saudi dictatorship serves US economic interests. Iran, on the other hand, does not.

Boris Johnson, however, has formally blamed Iran for the attacks on Saudi Arabian oil facilities, claiming there was a “very high degree of probability” Iran was responsible. He also refused to rule out UK military assistance if Saudi Arabia or the US requested it. This follows on from months of UK government grandstanding on Iran.

Speaking at the UN General Assembly, meanwhile, Donald Trump tried to rally support for his administration’s aggression towards Iran. He claimed Iranian actions were threatening ‘US security’ and said “I will never fail to defend America’s interests”.

Yemen’s Houthi movement, however, has claimed it was behind the attacks (in response to Saudi crimes in Yemen). And Iranian foreign minister Mohammad Javad Zarif stressed that “if Iran were behind this attack, nothing would have been left of this refinery”. Responding to Johnson’s finger-pointing, meanwhile, Iranian foreign ministry spokesperson Abbas Mousavi insisted that “the British Government should stop selling lethal weapons to Saudi Arabia”.

In short, there are conflicting claims about responsibility. And there is currently no publicly available evidence to confirm who is to blame. One thing is certain, though: jumping into a disastrous war with Iran to please the Saudi dictatorship is something that all progressives should firmly oppose.