A new academic survey suggests there are deep divides in Great Britain over Brexit which make many voters think some level of violence against MPs may be a “price worth paying” to get their way. The report, from researchers at Cardiff University and the University of Edinburgh, apparently found such feelings on both Leave and Remain sides of the debate.

In this environment, it seems more important than ever that we put a peacemaker in Downing Street. And Jeremy Corbyn is the person who best fits that bill.

The survey’s co-director, Prof Richard Wyn Jones, said he was “genuinely shocked” at the findings:

What do these findings tell us? Professor @RWynJones, co-director of the Future of England Survey and director of @WalesGovernance discusses the results. pic.twitter.com/twjRLfsVDE

Criticism of the survey

One Twitter user asked about the “degree of risk” and the “degree of violence” in question, something that the survey didn’t appear to mention. In other words, it wasn’t totally clear what people considered to be acceptable violence; and the question of “risk” added in an element of doubt (i.e. people could perceive it as ‘possible violence’ rather than ‘guaranteed violence’). They clarified:

Also, on my second question – there is nothing specifying what counts as violence towards MPs. Walking through shouting protesters outside Westminster? Getting milkshaked? Getting attacked or even murdered? People's interpretation of a term will determine it's acceptability.

About half of leavers and just under half of remainers think that the possible violent outcomes are unlikely or very unlikely.

Overall, Conservative and Liberal Democrat voters were those most likely to think the risk of violence was “worth it” to get their way.

In England, results showed that Conservative voters were most likely to think the risk of violence was “worth it” to leave the EU: 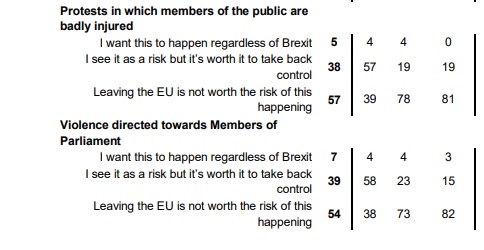 Liberal Democrat voters, meanwhile, were most likely to think the risk of violence was “worth it” to stay in the EU:

In Wales, results showed that Brexit Party and Conservative voters were most likely to think the risk of violence was “worth it” to leave the EU:

And again, it was Lib Dem voters who were most likely to think the risk of violence was “worth it” to stay in the EU: 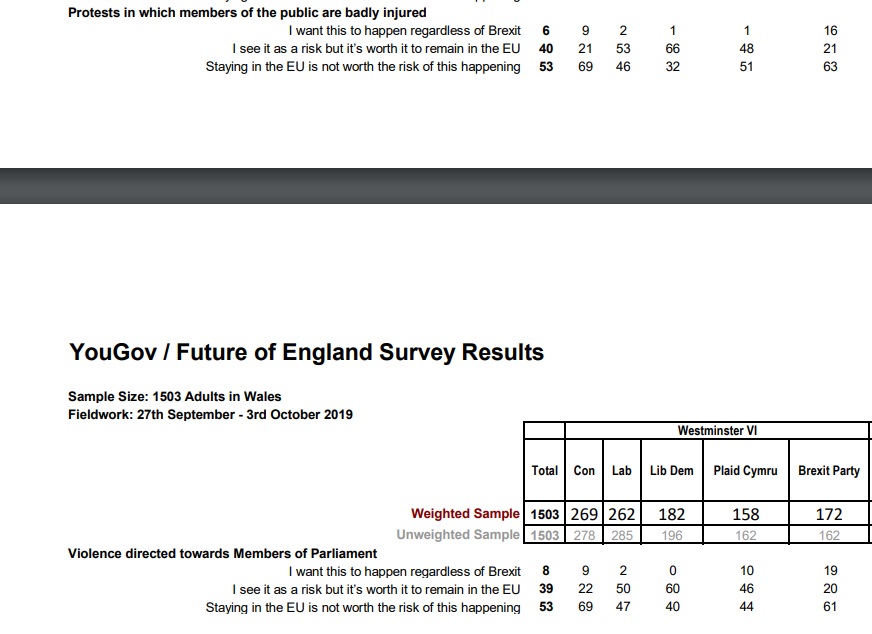 In Scotland, results again showed that Conservative voters were most likely to think the risk of violence was “worth it” to leave the EU

Meanwhile, SNP and Lib Dem voters were most likely to think the risk of violence was “worth it” to stay in the EU: 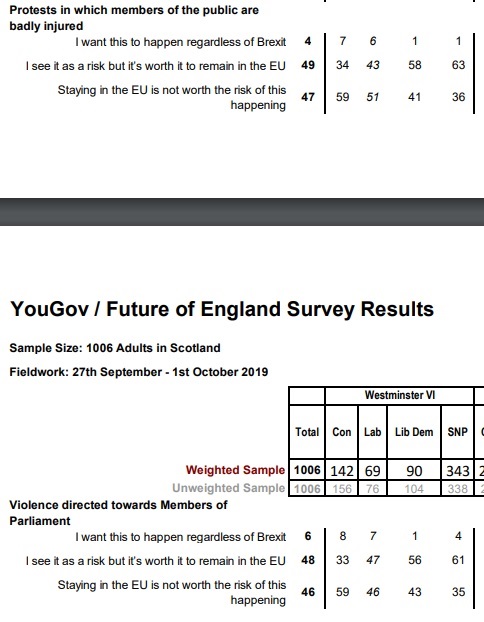 Bring in the peacemaker

In short, the division in Britain seems to be clear and concerning. And politicians aren’t helping.

Boris Johnson has long been pushing for an unpopular, elitist no-deal (with the back-up of a hard-right Brexit deal). And he and his supporters have been spouting divisive, warlike terminology – echoing the dangerous rhetoric of a violent and empowered far right.

Lib Dems, on the other side of the Brexit divide, have been promising to revoke Article 50 and just ignore UK voters who opted to leave the EU.

Jeremy Corbyn, meanwhile, is trying to unite British people by pledging to let them choose between a sensible Brexit deal or remaining in the EU. He is also a politician who has consistently stressed “I don’t do abuse”, and has famously won numerous peace prizes. And in a country where around half of the population don’t feel strongly about either Leave or Remain, he has been trying to focus voters’ minds on his bold and exciting policies on the issues that most people really care about.

Democracy, at its best, is about being able to listen to everyone’s concerns and reach sensible compromises. But today, hardline positions on Brexit seem to have created a deep and volatile divide across Britain. And with this in mind, there has possibly never been a more important time to put a tried and tested peacemaker in Downing Street.