Corbyn slams the elite offensive that snatched change away from Britain, in a powerful new interview - Canary Workers’ Co-op 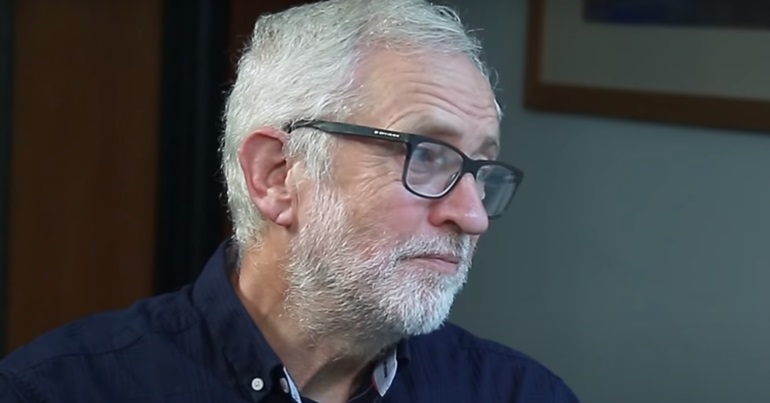 In a new interview with Middle East Eye (MEE), Jeremy Corbyn has made some powerful observations about the multi-faceted elite campaign which stopped him becoming prime minister.

He spoke, for example, about media propaganda, state opposition to his ethical foreign policy stances, struggles with the Labour Party machine, and Brexit.

Britain’s corporate press spent years trying to stop Corbyn winning power because of the big political shift he represented. And however much media hacks do their jobs now that he’s no longer Labour leader, this is a period progressives must never forget.

In the MEE interview, Corbyn highlighted the media’s obsession with personally attacking him however it could. It tried to undermine him via distant ancestors, his wife’s family, and even by following him at a park close to his home. As he stressed:

it was this sort of obsessive stuff, which was kind of at one level laughable, but all designed to be undermining.

He only decided against taking legal action because he knew it would ‘destroy him financially’.

The state’s opposition to peace

Corbyn also addressed civil service leaks claiming he was not physically up to being prime minister. He stressed that the supposed investigation into this matter had not yet identified those responsible.

Regarding briefings from inside the security service and military establishment, meanwhile, Corbyn insisted:

the briefings were designed to undermine and designed to disagree with my world view. My world view is [that] the fundamental problems facing this planet are the environmental crisis… the levels of inequality across the planet, and that the way in which Britain went into wars in Afghanistan and particularly Iraq had very serious long-term consequences.

Corbyn’s warnings about the dire consequences of the invasion of Iraq in particular were notoriously proven right.

we then got into the idea that somehow or other bombing Libya would bring about a peace and security. What it’s done is unleashed proxy wars [between Turkey and other Middle Eastern states]

And he added, regarding the refugee and conflict situation in the region:

my view was the bombing of Libya would actually make the situation worse. Where was I wrong?

Corbyn has fought against antisemitism for decades. But one of the major smear campaigns against him tried to convince voters that he and his movement were somehow antisemitic.

As Corbyn said in relation to the “very small” number of cases of antisemitism in the Labour Party:

I was the one that introduced a system to ensure they were properly dealt with. What I inherited was a system that was not effective, that wasn’t clear, that wasn’t definitive.

He explained these efforts under his leadership, and also addressed the Labour Leaks revelations which showed his opponents allegedly delaying attempts to deal with the “logjam building up in the party on individual cases”. For him, it was important to have a ‘very close investigation’ into this process.

Remember the equalities commission is now an arm of government

it’s quite significant that the Conservative government has… underfunded the [Equality] and Human Rights Commission… and for some reason, which I don’t fully understand… decided to take it away from its independent status and make it part of [the] government machine

Corbyn has previously suggested that he may have trusted too many people unworthy of trust. And as the Labour Leaks scandal revealed, this was particularly true ahead of Corbyn’s massive surge in the 2017 general election. Corbyn told MEE:

I always knew that there was a culture in the Labour party that was not a healthy one, of an almost self-perpetuating bureaucracy.

When he became leader in 2015, he met party elites and reportedly said:

I’m not here to start a war with you, I’m not here to get rid of you all. What I want to do is develop the party in this kind of direction [“into a community-organising base of the party”]. And we had the utmost resistance to bring in community organising, which is where [former general secretary] Ian McNicol and I finally parted company.

In 2017, Corbyn wanted to go out and mobilise people, not lead a ‘defensive’ election campaign. Because, he stressed:

It was clear to me that the leaked manifesto… had actually a much better reaction than we expected. And the support for that manifesto was huge. The party bureaucracy was so leaden-footed, it couldn’t appreciate what was actually happening on the ground.

look, think of what’s going on out there. There are a lot of people getting involved in politics for the first time, there’s more people involved in our campaign than [have] ever been involved before. There are people just forming their own campaigns to support Labour candidates.

In the 2019 election, Brexit became a key issue again. Corbyn told MEE that he was essentially between a rock and a hard place, because most Labour members were pro-Remain but “a substantial minority” of Labour voters were pro-Brexit. And the second referendum attempt to bridge that gap didn’t work.

In certain working-class areas that hadn’t improved much since industrial decline, Corbyn said:

the sense of disillusionment in those areas with [the] modern economy is huge. And they’ve also had a steady diet for five years of unbelievable attacks on the Labour Party, on me personally. And it had an effect… If you’re told day after day in your daily newspaper that the leader of the Labour Party is an evil person, something gets through.

Looking back at the original 2016 Brexit referendum campaign, meanwhile, Corbyn has few regrets. As he highlighted:

I did more visits, more miles, more meetings, more rallies, than the rest of the shadow cabinet put together.

But he stressed that, for the media:

the only show in town was the blue-on-blue war, so the stories day in day out were between [David] Cameron and Boris Johnson, basically, who were obviously on opposite sides

One massive lesson from Corbyn’s time as Labour leader is that powerful political and economic interests will not move aside without a fight. And when the largely billionaire and multi-millionaire-owned media establishment is a big part of that elite alliance, information is a key battleground. With this in mind, support for independent media will be essential if progressives are ever to bring about real change.