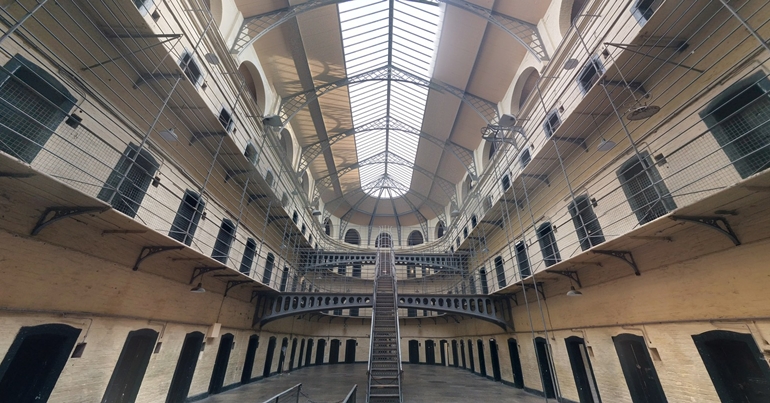 The Counter-Terrorism and Sentencing bill 2019-21 is currently going through the House of Commons. If passed, it could result in people spending longer periods of time in prison. This bill has come in for criticism from independent reviewer of terrorism legislation Jonathan Hall QC. Because Hall believes it doesn’t offer any hope of reform.

And it’s going through the House as the Ministry of Justice (MoJ) announces plans to build four new prisons. The MoJ says this will “boost rehabilitation and support [the] economy.” In addition, these prisons could increase the prison population by 10,000 people across England over the next six years.

The MoJ claims the prisons will create “thousands of jobs” and “boost rehabilitation and cut reoffending”. These are grand claims. But unfortunately they don’t stack up based on research and expert opinion on the UK prison system. So, proper reform is long overdue.

A precise start date for the prison system is difficult to determine as they’ve been a part of human civilisation for millennia. However, what’s more determinable is the imprisonment rate in the UK. It has the highest rate of incarceration in western Europe.

Today, people from outside the UK make up 11% of the population. People from ethnic minorities account for 27% of the prison population despite only comprising 13% of the general population.

In 2018, Corporate Watch (CW) conducted a report into prison expansion in England, Wales and Scotland. It examined the damage done by having such numbers in prison. The report stated:

Research by the National Preventive Mechanism showed that more than 110,000 people were detained across the UK in 2017, with 70 deaths a month in or after release from Detention. (Including people detained under the Mental Health Act, in secure children’s homes or in Immigration Detention).

Criminologist Dr David Scott went further. When discussing the new prison in Wellingborough at a public meeting, Scott revealed some shocking statistics about what happens to people in the system, saying:

The truth is prisons systematically generate suffering and death. 339 prisoners died in prisons in England and Wales in 2016. There were 110 self-inflicted deaths (and at time of writing a further 57 deaths awaiting classification). A prisoner self-harms every fifteen minutes and a prisoner attempts to take their own life around once every four hours. There have been 4,126 deaths in prison in total since 1990 and between 1990 and 2010, 1,407 prisoners took their own lives. This last figure is now of course much higher today as 500 prisoners have killed themselves in the last six years.

Whatever the rhetoric about jobs and financial investment in the Wellingborough community by local and Westminster politicians, what the prison will really bring is intensified levels of harm and human suffering.

Community Action on Prison Expansion (CAPE) is a grassroots organisation “fighting prison expansion in England, Wales and Scotland”. It counters some of the myths associated with the justification of the prison system.

CAPE says upon release from prison, most people go right back to the same situation they were in before entering it. So upon leaving, they could return to poverty or addiction.

On that basis there can be little surprise that 58% of adults who serve a sentence of less than a year are re-convicted within one year of their release. And the statistics are even worse for under-18s as:

73% of prisoners under 18, are re-convicted within 1 year of their release.

CW’s 2018 report examined this in the light of prison expansion. It also found prison failed in terms of rehabilitation as:

Rehabilitation retains its origins in Christian moralism. Rooted in the values of the 18th and 19th centuries, prisons emerged ideologically from the values of the church and capitalism. This was an ‘individualistic’ logic holding that confinement, solitude and punishment can lead to individual development and moral improvement.

While such justifications for the existence of prisons may be gradually disappearing from mainstream discourse, prisons continue to play a role in the formation and disciplining of people both inside and outside. This includes the reinforcement of gender roles: prisons have become the ultimate patriarchal punishment from the paternalistic state. Attempts to reform the prison system and ‘improve rehabilitation’ only expand and cement this violent system as it tries to make itself look more humanitarian.

An increase in criminalisation

CAPE also debunks the notion that we need more prisons because crime is growing. In fact, it says, the prison population is growing “because the government is changing our laws, and making more and more actions into criminal offences”. This then has the effect of putting more people into contact with the police and prisons. So CAPE says “the solution is decriminalisation”.

A drain on resources

Additionally, CAPE says that prisons aren’t cost efficient and they take resources away from more important services such as “health care, education, housing and social programs which better address root causes of crime.”

CW’s report also found that building new prisons did not tackle overcrowding. Nor did it bring the apparent economic benefits to the local economy.

The Canary contacted both the MoJ and the Labour Party for comment but neither had responded by the time of publication.

Whether this prison building programme gets off the ground remains to be seen. And even if it does, the chances it would help reform the prison system are low. These chances are dealt a further blow because people on the inside don’t have a vote. So genuine prison reform is also unlikely to be an election issue.

So it’s up to campaign groups and ordinary people to raise their voices. Genuine prison reform could be an important step to building a fairer society. But it’s difficult to see how longer sentences and more prison places can achieve this.