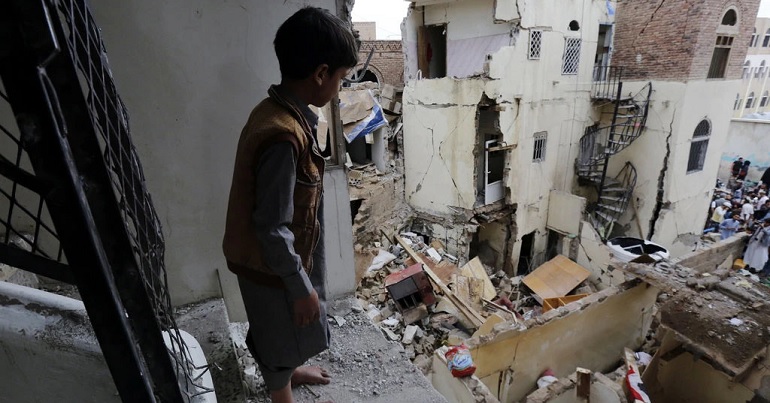 Let’s face it, the Tories have never really been known for championing human rights. Still, recent announcements from Dominic Raab regarding sanctions on foreign nationals for human rights violations were kind of a big deal. They came on the back of an alleged re-branding of the UK as a “new global human rights regime”. And not only were Raab’s plans welcomed by the opposition party, they were heavily praised.

But it didn’t take long for the sanctions to be exposed as a cynical move, motivated by political expedience rather than any real commitment to human rights. Firstly, the list of countries being sanctioned is in itself worth examining for its notable omissions – not least of which being the apartheid state of Israel. Moreover, recent news of the UK’s collusion with Saudi Arabia, a country on the sanctions list, on its war crimes in Yemen is further proof of the Tories’ hypocrisy. As MP and former Green Party leader Caroline Lucas tweeted:

How the Foreign Secretary can say on one day that the UK will act as a force for good in the world, standing up for human rights, and then on the next, agree to this moral outrage is just unbelievable

The hypocrisy leaves me lost for words https://t.co/tB8oIDCzlZ

Sanctions have been imposed against individuals or organisations in Russia, Saudi Arabia, North Korea, and Myanmar. It’s interesting, however, that this immediate list of sanctions doesn’t have on it what should be some very obvious contenders.

And these include figures from nations against whom indigenous populations have themselves been calling for sanctions and boycotts. There is no mention of the apartheid regime of Israel that has a sordid history of violating international conventions and human rights law. Nor are sanctions being placed against Turkey, which has been carrying out atrocities against the Kurdish population within its own borders as well as neighbouring Syria. And there’s no acknowledgement of China’s ongoing persecution of Uyghurs and other minorities.

So it’s likely that these newly-announced sanctions aren’t just about human rights abuses. If they were, these very obvious perpetrators wouldn’t be left out. And when we look at the UK’s special relationship with Israel, or the relations it’s trying to nurture in the wake of Brexit with Turkey and China, the rationale behind who is and isn’t sanctioned becomes clearer.

More galling still is Raab’s claim that the sanctions targeted those who’d been involved in extra-judicial killings, when the UK itself has been guilty of these on multiple occasions.

But it gets worse

The Conservative government’s hypocrisy doesn’t end there. Within a day of announcing sanctions against Saudi individuals for the killing of journalist Jamal Kashoggi came reports that the UK will continue arms sales to Saudi Arabia. The irony is that when asked if the sanctions could damage trade relations with Saudi Arabia, Raab proclaimed that it was “a matter of moral duty”, adding:

We can’t turn a blind eye to gross violations of human rights.

In June 2019, the Court of Appeal ruled that the Government acted unlawfully when it licensed the sale of UK-made arms to Saudi forces for use in Yemen without making an assessment as to whether or not past incidents amounted to breaches of International Humanitarian Law. The Government undertook not to approve any new licences pending a reconsideration process. … In the aftermath of the Court ruling, the Government has admitted multiple breaches of the ban of new licences.

Today’s announcement means that further licences can be granted. CAAT is considering all legal options to challenge this decision.

CAAT highlighted the extent to which the UK has been complicit in Saudi Arabia’s war in Yemen:

Since the bombing of Yemen began in March 2015, the UK has licensed £5.3 billion worth of arms to the Saudi regime…

In reality the figures are likely to be a great deal higher, with most bombs and missiles being licensed via the opaque and secretive Open Licence system.

This is a disgraceful and morally bankrupt decision. The Saudi-led bombardment of Yemen has created the world’s worst humanitarian crisis, and the government itself admits that UK-made have played a central role. …

The evidence shows a clear pattern of heinous and appalling breaches of International humanitarian law by a coalition which has repeatedly targeted civilian gatherings such as weddings, funerals, and market places. The government claims that these are isolated incidents, but how many hundreds of isolated incidents would it take for the Government to stop supplying the weaponry?

Smith also called out the government’s “rank hypocrisy” over this decision:

This exposes the rank hypocrisy at the heart of UK foreign policy. Only yesterday the government was talking about the need to sanction human rights abusers, but now it has shown that it will do everything it can to continue arming and supporting one of the most brutal dictatorships in the world.

Not just arms, but training too

What’s worse, the UK’s complicity in the Saudi-led coalition’s war against Yemen doesn’t end there. An investigation by Declassified UK has exposed how UK personnel have been training Saudi-led forces throughout the war.

A lot is known about the UK arming and supporting the Saudi-led bombing campaign, but, through training, it has also assisted with a deadly naval blockade.
The investigation, which has been supported by Campaign Against Arms Trade, shows that between September 2016 and March 2017, the Royal Navy provided an “Exclusive Economic Zone Protection Officer course” to Saudi and Emirate personnel… The Saudi and UAE naval forces have been responsible for inflicting and implementing a blockade against Yemen, which was heightened in the months that followed the training.

Regarding the training, Smith said:

This training is symptomatic of the cozy and immoral political and military relationship between the UK government and the Saudi-led coalition. Downing Street should be condemning the atrocities that have been inflicted by the Saudi regime and its coalition partners, including the callous blockade. Instead it has been all too happy to look the other way while putting arms company profits ahead of the right and lives of Yemeni people.

CAAT added that the blockade had since been “eased following the condemnation of aid agencies and the United Nations“. Using Freedom of Information requests, CAAT and Declassified UK also uncovered that:

310 Saudi personnel were trained at six RAF sites in England and Wales last year. Some of the training is still underway, with courses lasting up to four years. The Royal Saudi Air Force has led a brutal bombardment against Yemen. The bombing campaign has created the worst humanitarian crisis in the world.

Given the very profitable trade relationship between the UK and Saudi Arabia, one that has resulted in the deaths of countless Yemenis, one thing is clear. In the wake of the new sanctions, the Tories may try to sell themselves as bastions of human rights, but the reality lies in stark contrast to their claims of wanting to make the UK a “new global human rights regime”.

The Tories’ commitment to human rights only extends as far as it serves them politically. Just ask the Yemenis. And the Palestinians, and the Kurds, and the Uyghurs.