People are 'demanding' the release of a UK soldier, arrested for protesting over Yemen - Canary 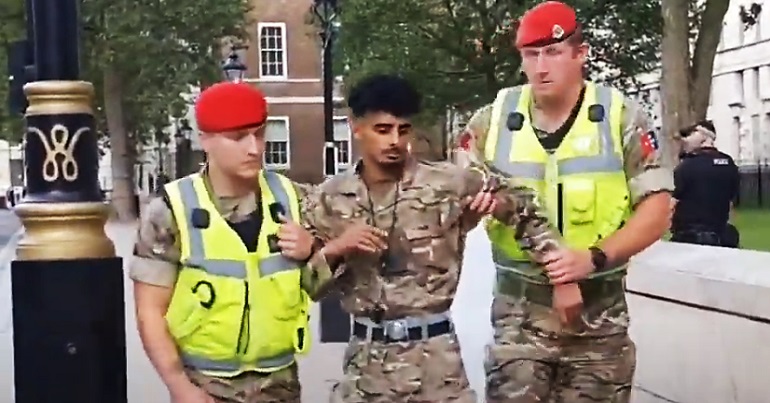 People are ‘demanding’ the release of a UK soldier. He was arrested by military police for protesting against the UK government’s involvement in the war in Yemen. But his detainment raises bigger questions over the army and its role in society – and whether personnel should be ‘unionised’.

The arrest of Ahmed Al-Babati

As Declassified UK reported, Ahmed Al-Babati is a Yemeni-born UK soldier. The report says that he was probably from the “14 Signals Regiment (Electronic Warfare)”. He was protesting outside the Ministry of Defence (MoD) on Monday 24 August about UK arms sales to Saudi Arabia. But eventually, military police arrived and detained him.

"I refuse to continue my military service until the arms trade with Saudi Arabia is put to an end."

A serving soldier was carried away for protesting #British weapon exports to Saudi Arabia – fueling one of the world's leading #humanitarian #crises in #Yemen. pic.twitter.com/mGSLbBfz5X

“Blood on their hands”

Declassified UK reported that Al-Babati said in a social media video before his protest:

And it’s clear this government has blood on their hands, so with that being said I refuse to continue my military service until the arms trade with Saudi Arabia has been put to an end. It is reported that a child dies every 10 minutes in Yemen, so I’ll be standing outside 10 Downing Street blowing a whistle every 10 minutes so that they can hear every time a child dies due to a war they continue to arm and support.

As The Canary previously reported, since 2015 the UK government has licensed at least £5.3bn worth of arms to Saudi Arabia. Declassified UK noted:

The British military has around 200 personnel stationed in Saudi Arabia to support its internal security apparatus and maintain its air force, which has been undertaking airstrikes in Yemen for over five years. British arms giant BAE Systems has provided £15-billion worth of weapons and services to the Saudi military since the Yemen war began in 2015.

On 7 July, the UK government resumed licensing new arms sales to Saudi Arabia, claiming there was ‘not a clear risk’ of British weapons being used for war crimes. At least 20 Yemeni children have been killed in airstrikes since that decision was taken.

But the military police’s arrest of Al-Babati has caused outrage.

Pacifist organisation the Peace Pledge Union (PPU), which produces the white poppies for Remembrance Day, called Al-Babati’s arrest an “outrageous assault on free expression” and said the military police should “immediately” release him “without charge”.

Its campaigns manager Symon Hill said in a press release:

Three cheers for Ahmed Al-Babati! Ahmed’s integrity and courage contrast with the knee-jerk viciousness of the military response. Britain should not be a country in which people are arrested for peaceful protests.

But Al-Babati’s protest and arrest brings to the fore another question about the armed forces. It is whether or not the government should grant them the same rights as other workers.

Currently, as the Wavell Room noted, serving military personnel cannot form or join a union specifically for them. It said that:

Queen’s Regulations officially permits military personnel to join civilian trade unions and professional associations, that enhance their trade skills and knowledge; but the UK’s trade union legislation specifically excludes armed forces personnel from collective labour relations. This prevents the statutory creation of an association to represent and promote the interests of the UK’s armed forces, making the UK out-of-step with many of our closest allies. The militaries of Germany, Norway, the USA, Belgium, Australia, Denmark, Sweden, the Netherlands, and Ireland all benefit from armed forces representative bodies.

Crucially, these do not have the power to call strike or industrial action, just like the UK’s Police Federation. And indeed without strike powers such an organisation is not technically recognised as a trade union, but rather a federation or association.

In 2019, the Labour Party pledged that it would create an armed forces federation, much like the police has. But would that have gone far enough?

Ensuring military personnel have the same employment and unionisation rights as other essential workers is all well and good – but if they cannot strike, then would it be (like the Police Federation) little more that lip service?

The case for a military trade union

Socialist Appeal addressed some of the bigger issues surrounding unionising the military. It noted:

A union could also provide guidance in the case of receiving immoral orders, which are deemed to be the individual’s responsibility… for those carrying responsibility for the lives of foreign nationals and even British civilians. Bloody Sunday – the Bogside Massacre on 30th January 1972 in Northern Ireland – might have been avoided, had the troops involved been fully aware of what was considered legally and morally expected; had a union been able to provide guidance in advance.

Service personnel are human beings, and most are from working class backgrounds. They are not brutes or insensitive killing machines, and the vast majority want to do – and be seen to do – the right thing; that is what drives many to join. Where events such as Bloody Sunday occur, they do so as a result of deliberate government policy, and from the highest ranks of the army. Then, when the deed is done, the officers withdraw and close ranks, leaving their troops exposed to public scrutiny and the courts. The troops must be armed with knowledge and legal representation.

But it also made a much bigger, and more interesting point:

Mutinous troops can also be won to the side of the workers during an all-out and determined general strike, and we will need young workers who can speak the language of the soldier to present solidarity appeals and issue promises to defend troops against the retribution of their officers, and to arrest officers who threaten the troops under their command.

In other words, in the event of mass national unrest, having a unionised army would almost surely put the military on the side of the working classes. This would, of course, terrify the upper echelons of the military and establishment hierarchies.

Al-Babati’s arrest is unfair and unjust – but unfortunately likely to be within the military’s rules. But his protest offers a glimpse into another possibility, if we as a country have to have a military at all. And it’s the potential of having a unionised, politically and socially mobilised armed forces on the side of the working classes.