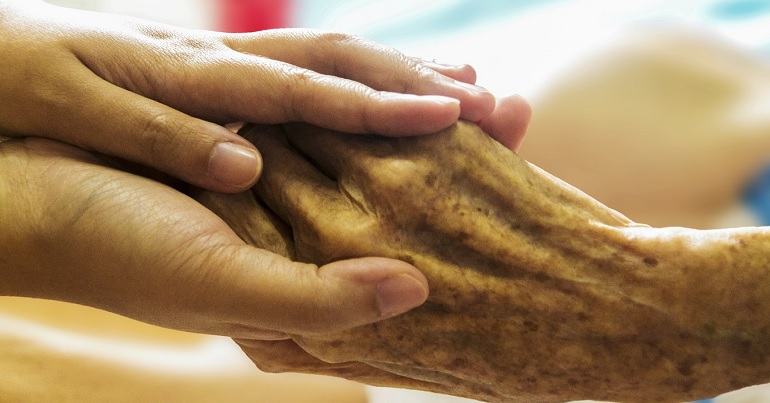 Delving into the coronavirus data tells us of a looming disaster. The Canary‘s analysis shows that this could see poor, clinically vulnerable and older people dying early in their own homes. To the government these people are disposable; to their friends and families, they are precious and deserving of adequate protection and care. Yet so far, nothing is being done to stave off this tragedy.

Public Health England (PHE) has released an analysis of excess deaths since March 2020. This is a figure which shows how many more people have died than would be expected. This is in England only. The “expected” number is based on the previous five years’ registered deaths. So, it gives a comparison year-on-year.

It is a useful figure in terms of the pandemic. And the media have discussed it. For example, on 6 October, Newsnight reported on excess deaths. Its policy editor Lewis Goodall delved into the figures. You can watch his analysis here, from 1:20 in.

But there’s another part of the analysis which not many people are talking about.

It’s the number of excess deaths during this summer. The graph below shows that the figures actually went into negative numbers: 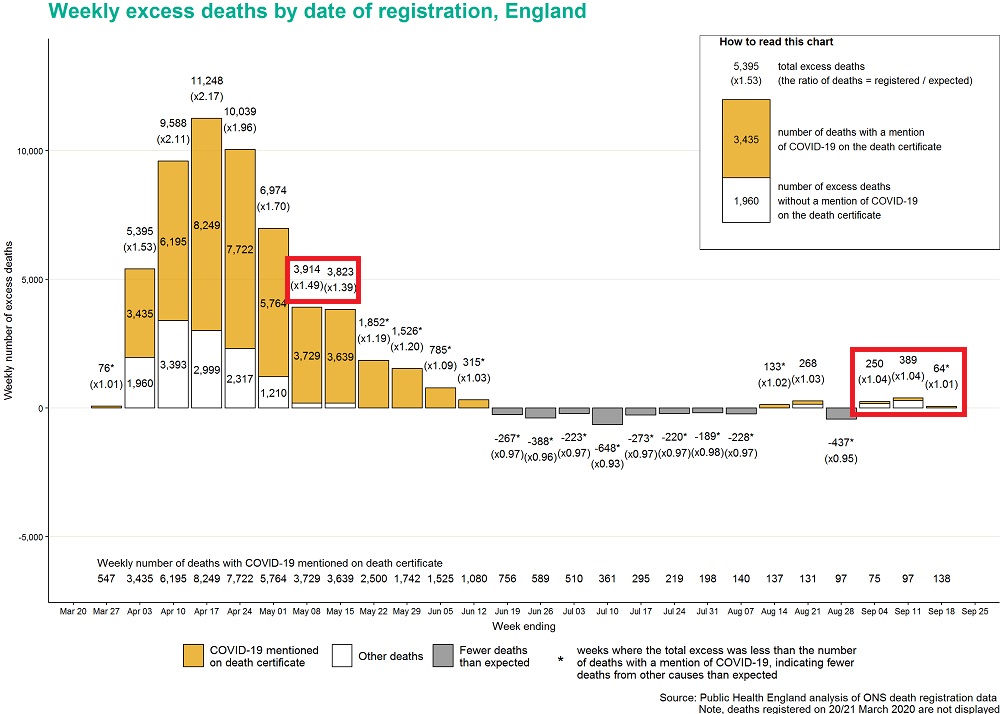 Breaking the figures down

It’s not an easy subject to discuss. But The Canary analysed the data, and there is a potentially simple reason for the negative number of excess deaths in the summer. It’s that many people who would have died during that period had actually been killed by coronavirus earlier in the year. For example, older people who may have died in August due to other health-related conditions were killed by coronavirus in spring. This presents three worrying possibilities.

Firstly, in lay terms, PHE expects lots of excess deaths in winter and spring. It’s colder and the flu season is happening. But it doesn’t expect many excess deaths in summer and early autumn. It’s warmer and viruses aren’t usually so prevalent. So, the fact that there have already been 1.04 times more excess deaths than expected in early September should be a cause for concern, because many of the people already vulnerable to coronavirus had sadly died earlier in the year. So, it could mean that the virus is already taking the lives of other, clinically vulnerable people. This is before flu season even kicks in.

But the other possibility is that people are dying from what would usually be treatable or manageable conditions, such as cancer. The Lancet has already predicted an increase in cancer deaths because of delays in treatment caused by the pandemic.

Secondly, this pattern could also give us an idea of how many more people could die this winter.

Like the PHE analysis, The Canary has based this on 2015-19 averages. For example, the five-year average number of deaths for the week ending 7 January was 11,901. So, if the excess deaths ratio remained at 1.04 that would mean a further 476 people would die that week, on top of the expected 11,901.

But it’s unlikely that the excess death ratio will stay at 1.04. It could go up to the 2.17 rate seen in the third week of April 2020. For the week ending 7 January 2021, based on five-year averages, that could mean 13,924 excess deaths in that week alone. Based on the third week of April’s figures, over 10,000 of these deaths could be from coronavirus. It’s important to note that these figures are estimates, and there are many other factors that could influence them. They are just potential numbers.

Thirdly, and perhaps just as worryingly, is where these deaths might happen, and to whom.

Age is a major factor in the potential number of deaths. Sky News reported that as of 9 September:

Meanwhile, cases have shot up amongst 20-29-year-olds: 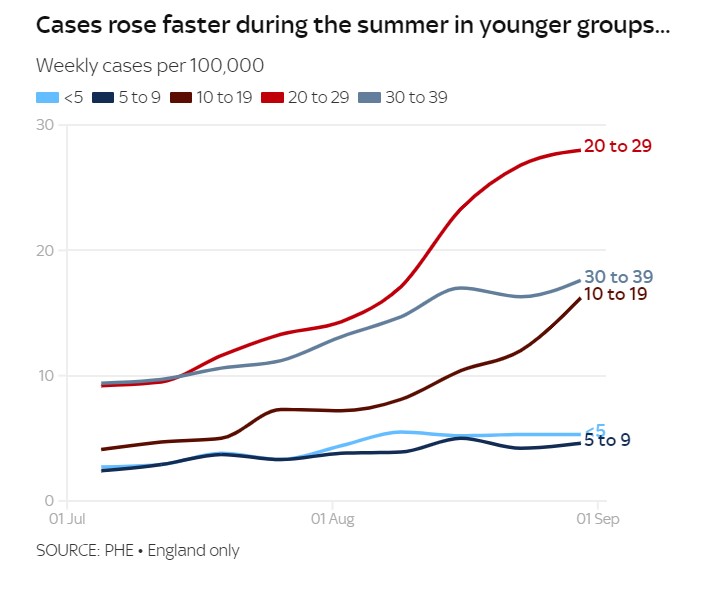 The message needs to be that young people can infect older people because they think ‘I’m young so I’m not at risk’ but we have such a dense social structure you’re only two steps away from another age group.

We’ve got this situation where younger people are transmitting it to older groups, we’re seeing it in the US and now France, with more older people being seen in the ICU.

This “dense social structure” also ties into another factor that has determined who’s most at risk of dying from coronavirus. That is social grade.

An issue of class

PHE found that excess mortality rates were highest among the poorest people; as was the ratio figure:

And the high population density of poor people is a factor in why deaths rates have been highest in these communities. But crucially, as the Nuffield Trust reported, the number of people dying at home has mostly remained steady the past few months. This is while hospital and care home deaths have fallen: 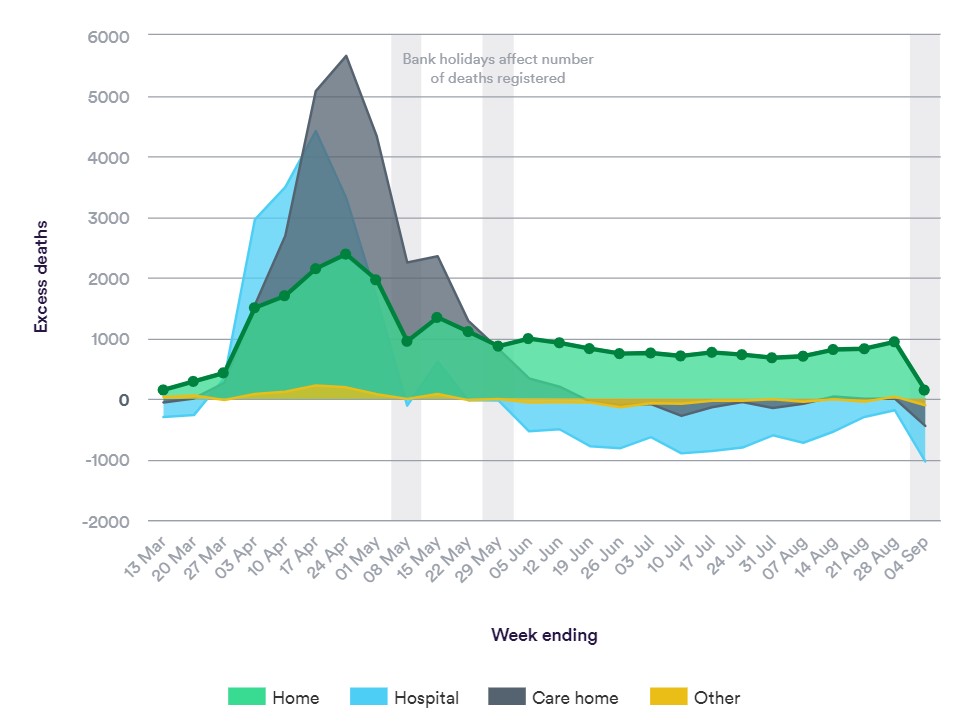 On the brink of disaster?

In short, there could be tragically high numbers of deaths of poor, clinically vulnerable and older people in their own homes. And it may well be that coronavirus will kill people who may or may not have died in the coming months. It will sign the death warrants of many vulnerable people who might otherwise have survived longer.

But at present, the government has done little to acknowledge this. Previously, hospitals and eventually care homes were its focus. Measures to protect people in their own homes were limited to shielding. And this measure was purely advisory.

Now, shielding has ended. The government has been encouraging people to get back to work or into their communities. And although it is still not adequately protecting care homes, systems are better than in March.

Dying alone, in their own homes

It is vulnerable people in the community who may now be most at risk. This also needs to be coupled with several other factors. These include what are sadly normal triggers for excess winter deaths. That is fuel poverty, cold weather and inadequate housing among others.  And much like at the start of the pandemic, the people dying could well be those whose lives were going to end in the short term. So, we could be weeks away from seeing a sudden and tragic surge in people dying from coronavirus.

The government has still not got a grip on the rapidly rising number of cases. Its track record on protecting old people and those who are clinically vulnerable is dire. It remains to be seen how this will improve in the next few months. But all the signs so far show that England could be on the brink of disaster. And it’s one that could sadly be centred around people dying alone and in their own homes.