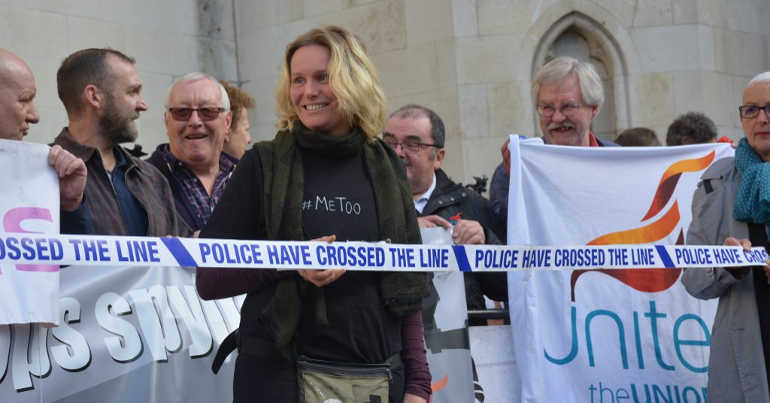 Imagine being spied upon, not just by one undercover police officer, but by at least six. This is what happened to environmental activist Kate Wilson. And now the police have finally admitted that this surveillance of Wilson breached her human rights.

In 2003, Wilson met undercover police officer Mark Kennedy, and they lived together as lovers for two years. He deceived her and numerous others he became friends with, hiding his real identity as a police spy. Kennedy infiltrated a number of protest groups and gatherings in the UK and across Europe, including Climate Camp, Earth First, and animal rights gatherings.

It’s hard to imagine the devastating effects that Kennedy has had on Wilson: the trauma she has faced. And yet the new admission by the police shows the terrifying lengths that the police will go to in order to spy on campaigners and activists.

According to Police Spies Out of Lives, the Metropolitan Police Service (MPS) and the National Police Chiefs Council (NPCC) have admitted that:

they breached Kate’s Article 8 ECHR rights – to a private and family life – after conceding that her surveillance by at least six undercover officers over a sustained period, was neither proportionate nor justified. Previously they had only admitted that Article 8 was breached by the undercover officer Mark Kennedy when he deceived her into a long term intimate and sexual relationship. Now they admit the intrusion was even greater.

Despite this, the police:

Wilson has explained that police units “have been systematically abusing women since 1968.” She said that these new admissions:

have wide reaching significance for the public at large. Over 30 women now know that they were deceived into intimate, sexual relationships with undercover officers. Many more people were subjected to similar infiltration by undercover officers. What happened to me was by no means unique, and hundreds of people will have had their rights violated in this way. These admissions mean it is simply not sustainable to say these operations were legitimate, proportionate, or lawful.

The admissions that Wilson’s human rights were violated are likely to make no difference to the Tory government. It’s currently progressing a bill to legalise the criminal activities of undercover officers and agents working for the police, MI5, and other state agencies. These agents are known as Covert Human Intelligence Sources (CHIS).

According to The Canary’s Tom Coburg, the new CHIS bill “is possibly one of the most dangerous bills to be put before the country in decades, legalising highly discredited practices”.

Human rights organisations have pointed out that:

And so, if undercover agents can literally get away with murder, then there will likely be no limit to the extent that they can violate women’s lives and get away with it.

Police Spies Out of Lives argues that:

Kate has fought this case [against the police] for 9 years. She has faced repeated attempts to shut down and delay her case, and fears this [new bill] may be the start of another attempt to close the case down and avoid further scrutiny.

The abuse and objectification of women by police spies spotlights institutional sexism within the UK. The fact that the government wants to introduce a bill which gives these spies complete impunity means there’s likely to be no end to the psychological, sexual, and emotional abuse of women at the hands of the state.