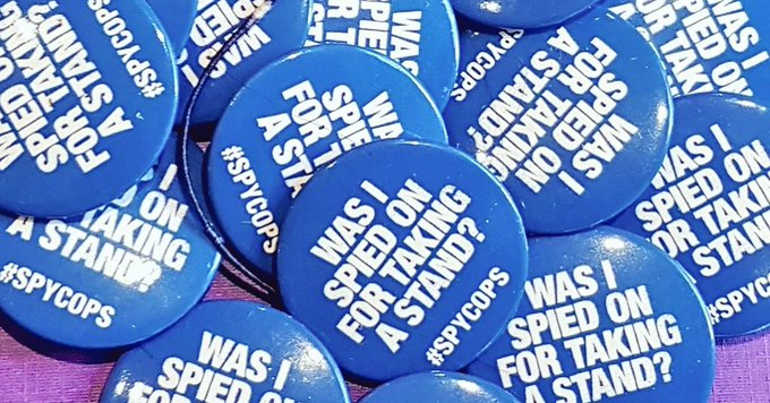 Monday 2 November finally saw the Undercover Policing Inquiry begin, after five years of delays. The inquiry will examine the disgusting actions of police units that employed over 140 police officers to spy on activists and campaign groups for years.

According to Campaign Opposing Police Surveillance (COPS), since 1968:

over 1,000 groups campaigning in the UK for a better society and better world have been systematically spied upon, infiltrated, or otherwise targeted by secret and unaccountable political police units.

Theresa May announced the inquiry in 2015 after the Ellison report, published in 2014, revealed that Stephen Lawerence’s family were spied on. The revelations caused public outrage. And it finally forced the government to look like it was investigating the decades-long state-sanctioned infiltration of campaign groups and social justice movements.

Since 2015, participants in the inquiry have had to continually fight what they call the “prioritising of the protection of perpetrators’ privacy above the right of victims and the public to know the truth.”

‘The least “public” public inquiry I have ever seen’

There are 200 victims, known as ‘core participants’, taking part in the inquiry. One is a woman known as Lisa. She was deceived into a relationship with undercover officer Mark Kennedy for six years. It was a deception which, she says, “was actually perpetrated and supported by the state.”

Lisa has no faith in the inquiry, but is hoping to get some clarity into what happened to her. She told The Canary:

It’s almost exactly a decade to the day that I found out my partner of six years was an undercover policeman, placed in my life by his employer to spy on me and my friends, only to be pulled out without warning after becoming the most central person in my life. All the unanswered questions are finally about to be asked. The delay after delay in one of the least transparent and least ‘public’ public inquiries I have ever seen, leaves me with no hope of getting to the truth. Only a tip of the iceberg will be visible, but it all helps understand what happened to us somewhat.

Over 30 women were deceived into having relationships with undercover police officers. These spies also fathered, then abandoned, children with some of the women.

Tom Fowler is another core participant in the inquiry. He told The Canary:

Though we have fought for years to get to the point where the inquiry is starting, I have no faith that the process is going to hold anyone or anything to account. If we are lucky some truth might escape despite the best efforts of the chair.

Kevin Blowe, coordinator for Network for Police Monitoring (Netpol), told The Canary that the inquiry has “bent over backwards” to enable the police to continue with their decades of lies. He explained:

It has been almost exactly 10 years since Mark Kennedy was exposed as an undercover officer. The police said he was rogue: that was a lie, we now know he was part of a long line of infiltrators. They said he was never authorised to have a sexual relationship with a campaigner. We now know that was a lie too. The police promised to collaborate with the public inquiry, but shredded a significant quantity of documents. Again, they lied. Does anyone really expect the lies will suddenly stop once the inquiry gets underway?

Unfortunately, the inquiry has bent over backwards to accommodate political policing’s desire to hide its many decades of targeting and disruption of campaign groups. We still have no idea what groups exactly were picked out: the inquiry will not publish a list, but initial indications seem to suggest almost anyone who presented a challenge to political or corporate interests. There may be thousands of people out there who have no idea they too knew an undercover officer who lied his or her way into their group or campaign.

Blowe told The Canary that many people who know that they were spied upon “have still been given no indication of the officer who gathered information” on them.

The police have been hell-bent on obstructing the inquiry, while protecting the anonymity of police spies, and refusing to release the names of 1,000 groups that were spied or reported on. This begs the question: why? Blowe says:

Why is it so important for the police to keep secret surveillance from 40 or 50 years ago? Netpol suspects it’s because they don’t want questions about the fact that undercover officers almost certainly continue to infiltrate campaign groups to this day.

This inquiry is unlikely to give activists the answers they desperately want, or give any kind of closure to the women who have been abused at the hands of the state. Instead, it is likely to highlight the fact that the state will do all it can to protect its own interests.