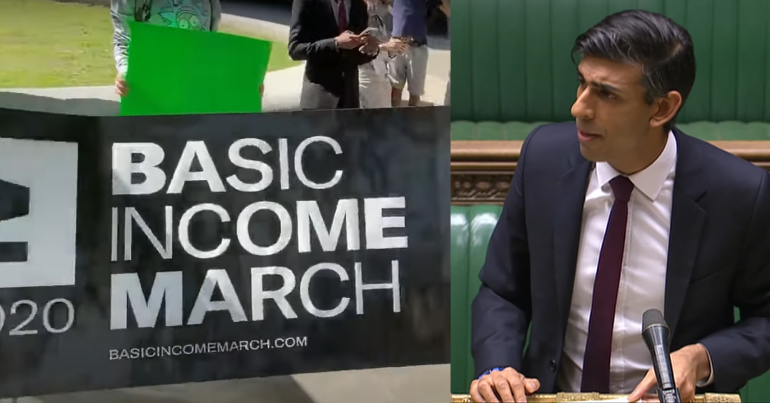 Elected representatives across the UK have called on the government to prevent poverty by trialling Universal Basic Income (UBI).

On 30 October, 520 MPs, councillors, peers, mayors and members of devolved assemblies, wrote to chancellor Rishi Sunak. They emphasised how current government support is leaving many families in poverty.

In the letter, organised by UBI Lab Network, the elected representatives said:

Millions of people have fallen through the cracks of the government’s support packages. The pandemic has left countless families facing poverty and extreme hardship.

With unemployment set to increase amid a shrinking job market, we urge you not to underestimate the wider costs to society of rising poverty and joblessness. These include the ripple effect of increased mental and physical health expenditure, as well as higher policing costs exacerbated by poverty. These will far exceed the costs of putting in place a Universal Basic Income.

Coronavirus has severely impacted jobs and incomes all over the UK. In response, the government has provided wage support schemes and Universal Credit increases.

However, reports have found flaws in these schemes. Many people have not been able to get help from the Job Support Scheme. In addition, Universal Credit was found to only be able to cover one fifth of lost income.

As a result, the Trussell Trust predicted that extreme poverty could double by the end of 2020.

UBI is a guaranteed income where everyone in a society, whether in employment or not, receives the same basic amount regularly. This should be enough to live on without working. Crucially, it would provide security for people unable to work during the pandemic and stop them falling into poverty.

UBI has received support from several local authorities around the UK. A number of councils have voted to trial it, including Leeds, Glasgow, and Norwich.

It has been estimated in a study by the economist, Prof. Karl Widerquist and Georg Arndt that UBI would cost the UK £67bn a year. This is compared to the £93bn the government reportedly spends on tax breaks and corporate subsidies a year.

The government on UBI

However, government backing is needed for trials of UBI to proceed.

In March, the chancellor rejected calls by over a 170 MPs for the implementation of UBI, saying the welfare system provided enough support.

With the implementation of a second lockdown, the furlough scheme has been extended. But the extension is only until December, at which point furloughed employees may yet again be at risk of unemployment. With this in mind, calls for UBI are strengthening.

After conducting a study on how UBI could work in the UK, Karl Widerquist said:

Those remaining in poverty under the scheme would be much closer to the poverty line than they are now and would have enough to get by in combination with other government payments and services. Therefore, we conclude that a UBI of this size would eliminate absolute poverty in the United Kingdom, a powerful result for less money than Parliament currently spends on corporate subsidies and tax breaks.