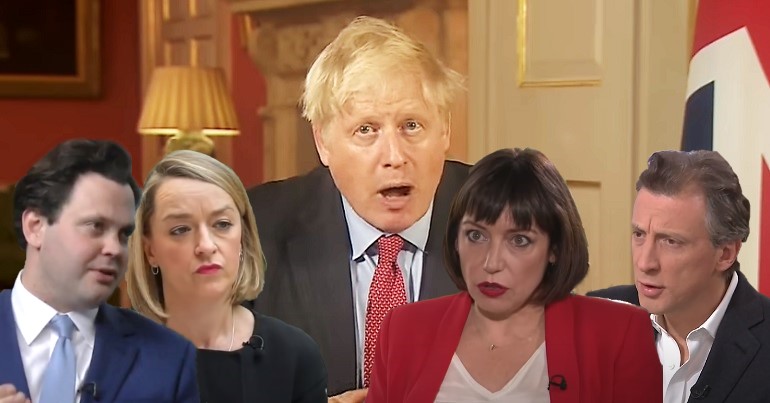 A campaign group has released a report. It details the extent of the Conservative Party’s use of “disinformation” during the 2019 general election campaign. The detail is staggering. But so far, the report has barely made a ripple in the media; probably because the establishment press is implicated in it.

Truth Defence describes itself as:

a collective of activists, lawyers, creatives, journalists, academics and citizens concerned about the spread of misinformation online, in traditional media, and in political advertising and campaigning.

Its founders are Dr Justin Schlosberg, a senior lecturer in journalism and media at Birkbeck, University of London, and former ANC MP and campaigner Andrew Feinstein. Previously, it had worked on “Lawfare”: i.e. the “use of litigation for political or ideological ends”. But now it has turned its attention to the 2019 general election. Called GE2019: a post mortem, its author Scholsberg’s findings are damning.

The backdrop to Truth Defence’s report saw the Tories sweep to power with a majority of 80. Jeremy Corbyn’s Labour, after (as BBC News put it) ‘exceeding all expectations’ in 2017 with a 40% vote share, crashed and burned. It won 203 seats. But as Truth Defence investigated, disinformation may have played a part. It said that:

the evidence collected strongly suggests that disinformation was an endemic feature of the Conservative Party campaign. Although it does not make comfortable reading for the Labour Party either, the extent and frequency of misleading online ads between the major parties was incomparable.

And the establishment corporate media was central to this.

Truth Defence looked at the media’s role in election disinformation. It highlighted some of the print media. The report noted a false Tory claim about Labour:

At the start of the campaign, a Conservative press release claiming Labour’s spending plans would amount to £1.2 trillion over five years – rapidly discredited by fact checking organisations and journalists themselves – was splashed across the front pages of the biggest Sunday newspapers including the Sunday Times, Sunday Telegraph and Mail on Sunday; titles that collectively account for over 60% of total circulation.

It said TV news “on the whole… did challenge and question” many of the Tories’ advert claims. But as the report noted, TV news took its time. For example, over the infamous “40 new hospitals” claim:

On television, the claim was first made by Boris Johnson during a recorded interview segment for the ITV Lunchtime News on 14th November. It was then repeated during a live studio interview with Johnson on BBC Breakfast the following morning. But it wasn’t until the 19th November – when the claim was repeated by James Cleverly on the BBC’s late evening Newsnight programme – that it was subject to any challenge or questioning by journalists.

But Truth Defence didn’t give TV news a free pass, with it noting one incident in particular:

During the final days of the campaign, the significance of time lags in correcting stories intensifies exponentially. Not long after ‘senior Tories’ briefed the political news editor of both the BBC and ITV that one of their special advisors had been “punched” by a Labour activist, video footage emerged showing that the advisor had merely bumped into a protestor outside a hospital in Leeds. But the news had already been reported by both editors who tweeted it virtually without any qualification. It was also covered as a “breaking news” piece on television where a BBC News anchor affirmed that “some punches or at least one punch has been thrown there”.

The report also said how much of the TV news reported on fake news, but that “at no point” did any of it highlight the Tories’ role in “fermenting” these untruths. But it wasn’t only in the media that disinformation was peddled. Because advertising also played a major role.

It found that overall the Tories’ advertising operation was huge. The report said that the party:

ran a total of 167 adverts across Facebook and Google which were either subsequently removed due to breach of the platform’s advertising policies and/or featured misleading or inaccurate claims. These ads ran for a cumulative total of 1,038 days which is the closest proxy measure for exposure and reach (give that both Facebook and Google only provide indicative ranges for the number of impressions generated by each ad). The equivalent figure for Labour was 139 [days].

The extent of false online advertising by the Conservatives was therefore seven times that of Labour: 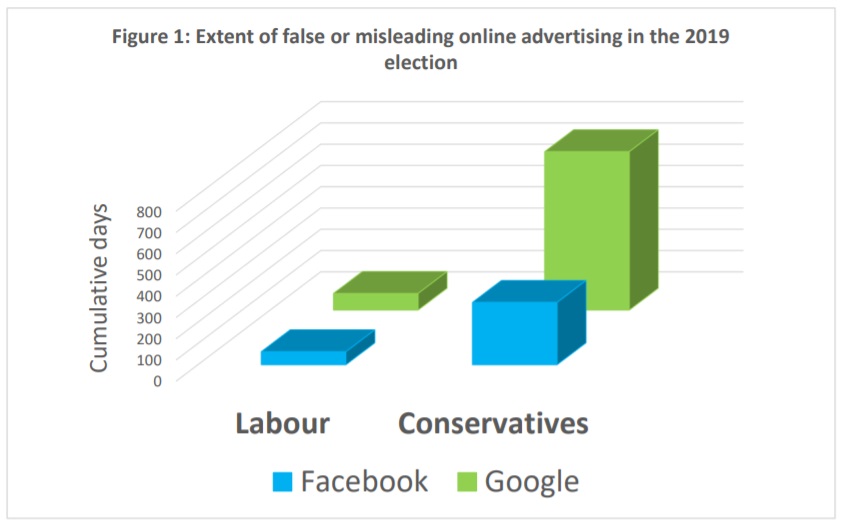 Truth Defence wrote about many of the Tory’s advert claims. For example, these included the ““40 new hospitals” claim that FullFact pulled apart. It said:

Of the “40 new hospitals” promised in the Conservative manifesto, only six have actually been given money to start building works—and those are upgrades to existing hospitals.

Labour was also guilty of disinformation in adverts. For example, one said that “Tories cut £8 billion from social care”. But as FullFact said:

Yet still, the Tories disinformation dwarfed Labour’s. And it was also more targeted.

What was particularly striking about the Conservatives’ false or misleading ad campaigns was the degree to which they were concentrated on the last week before polling day. On Google, the party ran nearly 50% of all their false advertising during this single crucial week. Given that the average time lag for Google to remove ads deemed in breach of its policies was 7 days, this strategy ensured that any such removals would have a negligible impact on the campaign. Indeed, five of the ads that were banned by Google were only removed on polling day itself.

If this wasn’t enough, Truth Defence found more. It noted that:

Overall, the report confirms what other researchers previously found. One example is First Draft’s analysis. It found that between 1-4 December 2020, around 88% of the total 6,749 Tory ads made false or misleading claims. At the time, senior Tory Michael Gove was typically obtuse, saying the ads must have been ‘errors’.

But Truth Defence was highly critical of the whole situation.

It summed up by saying:

The phenomenon of disinformation during election campaigns is of course nothing new. But what was relatively unique about the 2019 election was not just the prevalence and systemic nature of disinformation, but the fact that it stemmed primarily from the major political parties and was amplified by a combination of the mainstream press, tech platforms and, to a more limited extent, broadcasters. The problem was not so much to do with disinformation stemming from foreign interference or the political fringes, but rather the political mainstream.

Our research suggests that neither the online platforms nor television news providers did enough to check or stem the circulation of false claims. The failure of the platforms in this respect was particularly noticeable, given that it took on average of several days for them to remove ads judged in breach of their policies. In election terms, that is a very long time indeed.

But Truth Defence also put its report into present-day context:

The Covid emergency has both obscured attention to this problem, and also made it all the more significant. The extent of disinformation revealed in this report raises profound questions that are unanswerable but also inescapable: were it not for the scale of disinformation, would the UK have had a different government responsible for handling the biggest national crisis since the Second World War? If so, would the outcome have been different? Would more or less lives have been lost?

These are painfully relevant points. And Truth Defence also concluded that things have to change:

In summary, the evidence suggests that the current regulatory framework for political advertising and campaigning during elections is not fit for purpose and wholly inadequate for the digital terrain on which elections are increasingly fought.

Unless and until the major platforms are able to implement a robust fact checking approval system before publication, there is an unanswerable case to ban all political advertising online during election periods.

Given the current government is the one that benefitted from the vast disinformation campaign, it’s unlikely to change the rules itself. All opposition political parties must not only convey the scale of the problem to the public but commit to eradicating it in their next manifestos. And the media must follow their lead.