Confirmed: the Tories have caused destitution to explode - The Canary 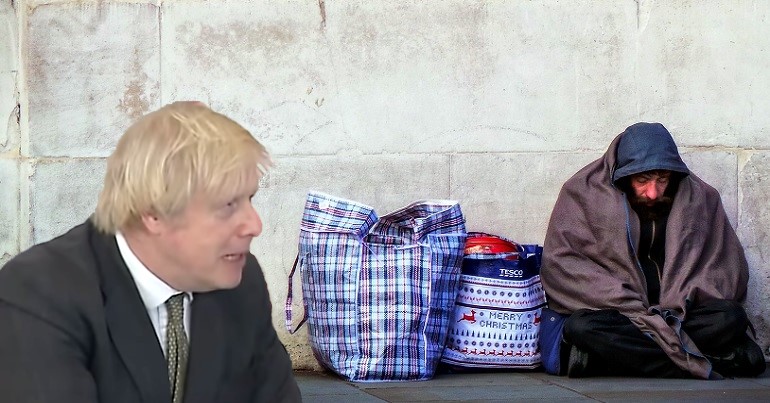 The number of households living in destitution has more than doubled in 2020. That’s according to new research. It shows nearly half a million two-adult families survive on less than £100 a week. But given what we know about the Tories’ coronavirus (Covid-19) response and pre-existing poverty, it’s hardly surprising.

Destitution: out of control?

The National Institute of Economic and Social Research (NIESR) has looked into UK destitution. It has done this for an episode of Channel 4 Dispatches. The NIESR hasn’t published its research yet. But the Guardian reported on the headline figures. It said that:

It noted that the NIESR found:

there were 220,000 more households living in destitution by the end of last year, potentially more than half a million people.

This is an increase in the number of destitute families from 197,400 to 421,500. The NIESR also found that the amount of destitution was different across the UK. For example, in the North West of England rates were three times higher than the UK figure. But the NIESR research is against a backdrop of increasing social decay.

The Canary previously reported on growing poverty. So far, there are no official figures for how much it has grown during the pandemic. But one study found that at least 700,000 more people were in poverty than before. The figure included 120,000 more children. This would mean more than 15 million people live in poverty in the UK. Foodbank figures also bear this out.

2,600 emergency food parcels were provided for children every day on average… during the first six months of the pandemic.

And on top of this, there’s been chaos with the social security system.

The Canary has been covering Universal Credit during the pandemic. A lot of debate has been about the £20 a week uplift. In April 2020, the DWP increased the rate of Universal Credit by this amount. But ever since, uncertainty has existed over what will happen this April. If the Tories end the increase, people will see the DWP cut £20 per week from their money. Then, on Friday 19 February, ITV News reported that the Tories would keep the uplift. But this would only be for another six months.

This won’t solve several basic issues; not least destitution. For example, for around 1.5 million claimants of things like Employment and Support Allowance (ESA), the government hasn’t given any extra support at all during the pandemic. Also, a survey of Universal Credit claimants found the £20 uplift to be “inadequate” anyway. For example, over 50% of new claimants said they either:

The pandemic has seen a perfect storm of factors entrenching severe hardship and destitution. But what’s the answer?

A new Beveridge report. That’s the kind of thing I’m talking about. Government can, if it wants to, do something on a different scale now. The nation has been torn apart, and there’s no point being defensive about that. We’ve got to gift each other some proper space to think. We’ve got to work out how not to leave the badly wounded behind.

The Beveridge Report was a 1942 “blueprint” for social policy, designed to reduce poverty. But Casey saying we need one naively assumes that the Tories want to tackle it. Given that in over ten years, right up until this January, they haven’t bothered, what’s changed? Very little. So, we don’t need another report telling us that Tory-led capitalism causes poverty. We need radical change from the bottom, up. And the sooner that happens, the better.