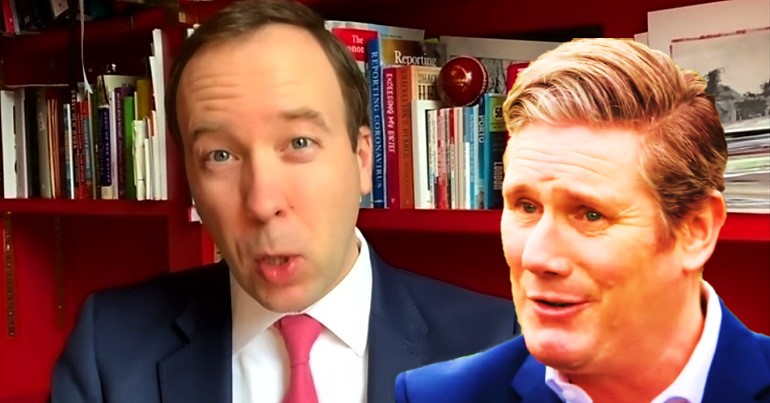 Matt Hancock needn’t have worried about the Labour leader savaging him on Sunday 21 February’s political TV programmes. Because Keir Starmer completely let the embattled health secretary off the hook.

The Canary reported on Saturday 20 February about a High Court ruling. As it noted:

The Government is required by law to publish a “contract award notice” within 30 days of the award of any contracts for public goods or services worth more than £120,000.

But the Good Law Project and a cross-party group of MPs said the Tories didn’t do this. And a judge agreed with them. He said:

There is now no dispute that, in a substantial number of cases… [Hancock] breached his legal obligation to publish contract award notices within 30 days of the award of contracts.

There is also no dispute that… [Hancock] failed to publish redacted contracts in accordance with the transparency policy.

So, were the Sunday 21 February political TV shows awash with calls for Hancock to quit? Of course not.

Starmer: let me wring my hands

First up was Labour leader Keir Starmer on Sophy Ridge on Sunday. Moments before, the host asked Hancock if he should resign. “No”, was his predictable answer. So, Ridge posed the same question to the Labour leader. And again, ‘no’ was the predictable (but ridiculous) answer. Starmer said:

And he also said:

But I think at this stage, calling for people to resign is not what the public really wants to see.

#Ridge – Should Matt Hancock resign after being found to have acted unlawfully over not publishing covid-19 contracts?

Keir Starmer – No…. that's not what the public want to see.#Marr pic.twitter.com/1W4ZDJOF4i

Starmer thinks there have been “problems” with the PPE contracts. Feel free to shout “FFS” while you read this. Because there haven’t been “problems”. There’s been unlawful activity from a senior government minister.

Over on The Andrew Marr Show, and things weren’t much better.

First up, and shadow justice secretary David Lammy was at odds with Starmer. He said that Hancock:

should publish the contracts, because the court has found it unlawful. He should cancel the… temporary scheme that he’s been using without any accountability or any transparency. He should come to parliament on Monday and explain what he’s going to do. It is outrageous, frankly… This is the sort of behaviour, giving contracts to your pub landlord and your best mate, that you would expect in a banana republic.

Ouch. Clearly Starmer’s ‘hand-wringing on the fence’ briefing hadn’t got to Lammy.

#marr – Matt Hancock was found to have acted unlawfully…. what do you think should happen now?

David Lammy – He should publish the contracts… this is the sort of behaviour, giving contracts to your pub landlord & your best mate, that you would expect in a banana republic. pic.twitter.com/00poRxZCrP

Then Hancock was on to defend his and the government’s actions.

The health secretary tried to pull on the public’s heart strings. He said his department, “in the height of the pandemic”, published contacts on average within 47 days. Hancock pleaded that:

my team were working seven days a week, often 18 hours a day, to get hold of the equipment that was saving lives.

Indeed: ‘getting hold of equipment’ from Hancock’s family friends; Tory Party-linked firms and donors, and a hotel carpet company. Yet the health secretary repeatedly used the ‘saving lives’ line to defend his and his government’s cronyism. Marr asked Hancock to apologise for breaching the law. He predictably didn’t. And Hancock even had the audacity to say the country should be “grateful” for his department doing its job.

But of course, Hancock whitewashing cronyism, exploiting a global crisis, and showing wilful negligence is all in a days work for our disaster capitalist-led government.