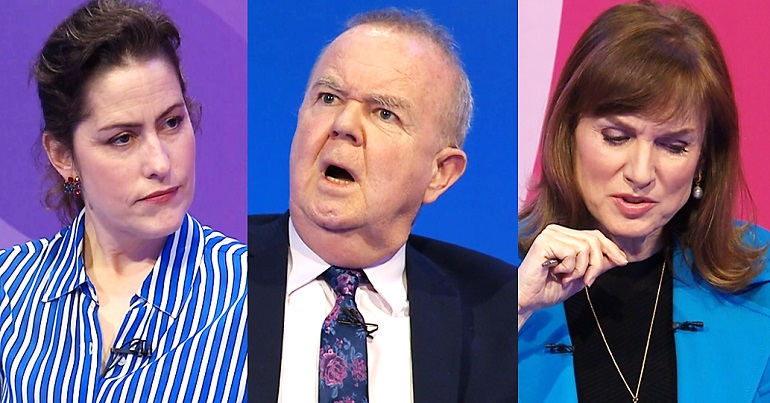 It’s rarely hard work pulling apart Conservative Party policy. But it is sometimes tricky to do it in a concise manner. So, enter Ian Hislop to annihilate a key Tory policy, live on BBC Question Time.

The UK’s nuclear weapons programme Trident has once again hit the headlines. This time it’s because changes were announced in the government’s Integrated Review of Security, Defence, Development and Foreign Policy. This review has replaced previous defence-focused reviews. As The Canary previously reported, the government plans to up:

So, people have been angry about this. Not least because the Tories are only giving nurses a 1% pay rise while spending more on bombs.

When the issue came up on Question Time on Thursday 18 March, Private Eye editor Ian Hislop tore it apart.

Trident: what a waste

He made clear that Trident is a waste of money. And Hislop noted that the Integrated Review prompted the question:

Is there any other alternative apart from these submarines that go round the world and spend a lot of time in the dock… They do spend quite a lot of time being repaired. These are the ones that we’ve extended the life of, before we actually replace them with another, unbelievably expensive and complex one.

He also gave his thoughts on another aspect of the review. The Guardian reported that:

The new policy says Britain would “reserve the right” to use nuclear weapons in the face of “weapons of mass destruction”, which includes “emerging technologies that could have a comparable impact” to chemical or biological weapons.

So, Hislop made clear the seeming ridiculousness of using nukes against a cyber-attack:

The prime minister was asked ‘why do you need more warheads in order to respond to a cyber attack?’. Really? We need more of them? You need them? It made no sense at all.

The Integrated Review outlined several threats to UK security. It said “Islamist” terrorism was the “primary” threat. The review also listed other threats as countries using:

illicit finance or coercive economic measures, disinformation, cyber-attacks, electoral interference or even – three years after the Salisbury attack – the use of chemical or other weapons of mass destruction.

Of course, the Tories would disagree with Hislop’s assertion that nukes were not needed for a cyber-attack. However, what we’re seeing with the Integrated Review is the Tories making excuses for nuclear weapons. Saying officially that a cyber-attack could need a nuclear response keeps these weapons relevant. But here’s the thing. Reviews have told the Tories for over a decade that a nuclear attack isn’t the biggest threat to UK security.

Note the lack of a mention a nuclear attack. This was because the review said this was a tier two risk. Another review in 2015 said the same thing. And now, here we are in 2021 with little having changed – except the Tories making excuses for having nuclear weapons.

As Hislop inferred, even the government’s own evidence says we don’t need nuclear weapons. So the rationale to increase our stockpiles defies any logical explanation.